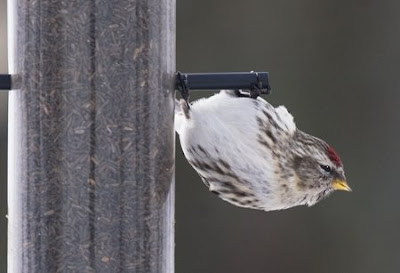 From northern Ohio, Kenn writes: This Common Redpoll was outside our window a year ago, in December 2007. It was one of dozens that came to our feeder that month, and one of hundreds that we saw in the general area. This month, we haven’t seen a single one.
Redpolls are in the "winter finch" group, and they were the headliners last year. Common Redpolls (and a few of their pale high-Arctic relatives, Hoary Redpolls) were all over the central and eastern U.S. and southern Canada in the winter of 2007-2008. Pine Grosbeaks also moved south in good numbers. So did Red-breasted Nuthatches and Bohemian Waxwings, which are not finches but which are similarly erratic in their winter occurrences.
We used to talk about winter finch invasions being "unpredictable," but that’s not accurate. These invasions are caused by changes in the supply of natural wild food in the boreal forest of Canada and Alaska, and if we knew enough about what was happening there, we could make predictions about which finches would invade in a given winter.
In fact, there is someone who knows enough, who researches the situation every year and makes predictions about the finch flight. The dynamic duo of field ornithology in Ontario, Ron Pittaway and Jean Iron, are very well connected with scientists and birders all over the north. Every year in early fall, Ron Pittaway collects info about seed crops in the boreal forest and writes a prediction, focused on which birds will have a flight in southern Ontario and adjacent regions. All of us in the surrounding states and provinces wait eagerly for Ron’s forecast.
Knowing how tricky it is to gauge these things, it’s amazing how often Ron Pittaway is right on the mark. For the 2007-2008 winter, he predicted the big redpoll flight and the movements of Pine Grosbeaks, Bohemian Waxwings, and Red-breasted Nuthatches. For this winter, he predicted that Pine Siskins would mostly leave Ontario, and indeed we had a flood of them coming south through the Midwest this fall. He predicted the possibility of a widespread southward flight of White-winged Crossbills, and we’re all enjoying the reality of that now.
Does Ron have mystical powers? Well, yeah, but this is mostly just a result of detailed understanding of the birds and their food supply. This year, for example, Ron predicted that Pine Grosbeaks would stay in the far north because the mountain-ash berry crop was good there. He predicted that Pine Siskins would leave Ontario because the spruce cone crop was poor in that province. He predicted the White-winged Crossbill flight because spruce cone crops over much of Canada had fallen off from previous highs. It’s fascinating stuff; you can read the whole thing on the Ontario Field Ornithologists site here.
Posted by Kenn Kaufman at 7:10 AM