From Oak Harbor, Ohio, Kim writes: While the weather here in northwest Ohio the last few days has been downright balmy, we suffered through a stretch of incredibly brutal weather for several days. Temps at or near zero, 25+ mile per hour winds, and everything was coated with a thick layer of ice. It was really hard to force ourselves to even go outside. Several Christmas Bird Counts scheduled for last weekend were canceled. You KNOW it's rough outside when birders decide not to do CBCs.

As a result of the weather, I spent a great deal of time last weekend keeping the feeders filled at the Observatory. Turns out, that can be interpreted in a couple of ways, depending upon your perspective. What I meant by "filled feeders" was this.... 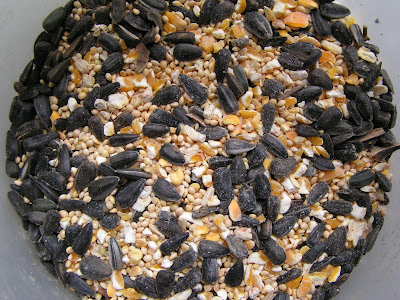 And, here's what "filled feeders" means from a different perspective... 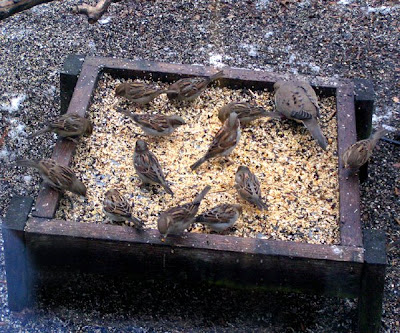 Oh yeah! Look at all that bird food... 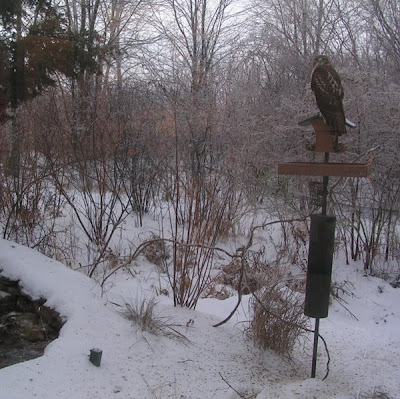 This immature Red-tailed Hawk must be really desperate. It was haunting the feeders all weekend, making pass after unsuccessful pass at the starlings and Mourning Doves at the feeders. The poor thing finally took a break on top of one of the feeders. What a contrast in style from the accipiters that often stalk the birds at our feeders. When a Cooper's or Sharp-shinned Hawk makes a pass it is with such swift precision as if to almost seem like it happened in your imagination. A feathered arrow, swift and true. But, this poor Red-tail was more like a lawn jart (remember those?!) and it came flopping in like a sumo wrestler arriving at a tea party.

Here's a closer look at this magnificent animal. 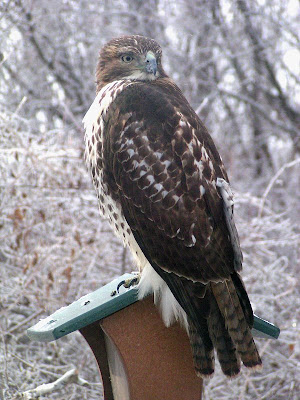 Note the brown tail that helps to identify it as a young bird.

Here in northwest Ohio we see Red-tailed Hawks on a daily basis, and we sometimes get a little jaded. "Oh, that's just another red-tail," you'll often hear people say. But, encounters like this one, up close and personal, remind us of just how blessed we are to have these creatures in our world.

I feel really bad for the bird. I know that it's hungry. And I know that the mortality rate in young raptors is high. If I can find some road kill, I'll scrape it up and toss it out near the Observatory and hope that the bird finds it. I've done this kind of thing before with great success.

Believe it or not, I once convinced a friend to help me lift and load the carcass of an eight-point buck that I found lying in a field (it had been struck by a car) into the back of his pickup truck. We hauled it to my house and dragged it out into the field about 300 yards from the house. This was late fall / early winter, and 300 yards seemed like plenty of cushion between the house and the large dead rotting thing.

The first birds to discover the prize were 13 American Crows, and I had an absolute blast watching these amazing birds feeding on the carcass. The hierarchy was immediately evident. The entire group would come in and roost in a large dead elm tree about 20 yards from the deer. After much calling and jostling, a small number of the birds (usually just 3) would come to the buffet to feed while the others kept watch. Once the first group was finished, they would return to the elm tree while another group came to dine, and so on, until all the birds had had a chance to feed. It was great fun observing the group dynamics of these incredibly intelligent birds.

Next to dine at the Road Kill Cafe was an immature Bald Eagle. He approached with extreme caution, using the crows' trusty dead elm as an observation deck to get the lo-down of the situation before finally deciding it was worth it and getting down to business. Eventually an adult eagle arrived and the youngster was driven out of the area.

Here's a terrible photo of the adult Bald Eagle that visited the carcass. 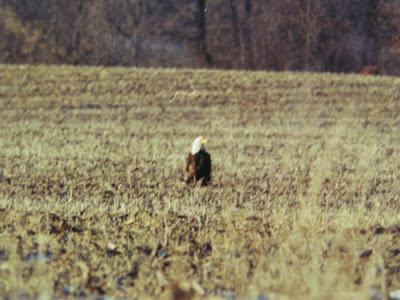 (Now, be kind about the quality of this photo! This was pre-digiscoping revolution!)

Early spring arrived, and with it, the Turkey Vultures. It was icky and gross, but at the same time, strangely captivating to watch them stick their heads way up inside the remains of the deer and get the goodies that were out of reach for the feather-headed feeders. That naked red head may be short on looks, but it sure comes in handy for extreme feeding conditions like a dead rotting deer carcass! 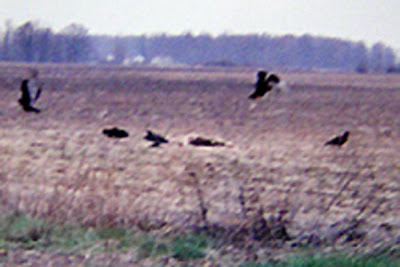 Okay, I know these photos are getting progressively worse, but if you squint your eyes, tip you head to the left, and now close your right eye part way, you can see that the fourth dark blurry lump from the left is a dead rotting deer carcass being visited by hungry Turkey Vultures!

Now, as I mentioned earlier, my friend and I drug the carcass about 300 yards away from my house. That was great during the winter, but then suddenly it was July. P--and might I add--U! If you decide to try out my extreme bird feeding method, please make sure that you select the location and distance of your feeding "station" with the thought that it might very well persist until those steamy 80+ degree days! You (and your neighbors) will be thankful for the consideration.

Posted by Kimberly Kaufman at 1:00 PM