The Next Birding Movie, part 2: it's no walk in the park

From Oak Harbor, Ohio, Kenn writes:  Back on July 14 I wrote about a feature-length film, A Birder's Guide to Everything, that was about to start shooting under the direction of a remarkable young filmmaker, Rob Meyer.  If you don't want to scroll all the way back to that date, you can read my earlier post at this link.

In August, at Meyer's invitation, I had a chance to visit the set for a few days.  Now, I've watched a lot of movies but I didn't know much about how they were made, and it was fascinating to have this behind-the-scenes view.  Although this isn't a filmmaking blog, this particular movie has birding as a main element, so I figured it was legit to write about it here.  To keep things manageable I'll break this up into multiple posts rather than writing one incredibly long post.

So, class, today's lesson: there is a HUGE AMOUNT OF WORK that goes into making a film!

Seriously.  I was stunned to see the dedication and the attention to detail that went into this work.  The first full day that I was on the set, I was there for more than 12 hours, but some members of the crew were there before I arrived and after I left.  I figure it was about 14 hours of work altogether, involving seven actors and more than 30 members of the crew, and they were focused and pushing hard the whole time.

How much footage for the final film did they produce during that 14 hours?

About two minutes' worth.

They were shooting a scene outdoors.  Work on it had begun weeks earlier, with scouting out the location.  They had chosen Teatown Lake Reservation, a beautiful wooded park in Westchester County, north of New York City.  With all the proper permits from the park authorities, they had set up along a trail through open woods.  The scene was of an encounter between two groups of birders - four teenagers and three adults.  I had read this scene in the screenplay months before, and hadn't given it much thought, but it was remarkable to see the effort that went into putting this short scene on film.

The scene starts with the four teens running out of the woods to the edge of a clearing, and pausing for a moment before exchanging a few lines of dialogue. When you see it in the film, it will look simple. But filming it was anything but simple.

The camera crew was using two cameras (huge, professional cameras) to shoot the scene from two angles.  When the kids ran up and stopped, their positions had to look random and natural, but they had to be positioned so that the faces of all four were visible to both cameras.  They had to be positioned so that no odd shadows fell on their faces, and so that no background elements were in awkward spots (e.g., so that no one appeared to have a tree growing out of their head).  In running up to their positions, they had to avoid crossing in front of each other in ways that would look awkward to either camera.

Of course, the director and cinematographer and camera operators were all on top of these details, planning them out carefully in advance, but there were other considerations.  With repeated "takes," the costume and makeup people had to swoop in periodically to make sure the appearance of the characters stayed consistent from one shot to the next.  With the passage of time, the light kept changing, so part of the crew was discreetly setting up lights and reflectors off-camera to keep the lighting consistent. The sound crew was constantly monitoring how things were being recorded, and sometimes a take would have to be redone because of background sounds that couldn't be edited out.


And those were just the things that I, as an amateur, happened to notice.  The professionals on the crew were attending to a zillion details.  When we watch the finished film, we won't notice most of these details - but if they were wrong, we would notice subconsciously, making it seem less realistic and less compelling.  The pros have to put an extraordinary amount of effort into making it all look totally natural and easy.

What was my contribution?  Nothing, really; I was just there to observe.  I did check out the birds in the area during an afternoon lull, and reported my results to eBird, using the BirdLog app.  Mostly the birds you'd expect on an August afternoon in the forest: Red-eyed Vireos still singing, Tufted Titmouse, White-breasted Nuthatch, etc., with the highlight being two Pileated Woodpeckers that flew right past where the crew was filming.  But the film professionals were intensely focused on their work, and I didn't have a chance to point out the big woodpeckers to them.

Email ThisBlogThis!Share to TwitterShare to FacebookShare to Pinterest
Labels: A Birder's Guide to Everything, filmmaking, movies, Rob Meyer

The Next Kaufman Field Guide!

"Then felt I like some watcher of the skies
When a new planet swims into his ken;
Or like stout Cortez when with eagle eyes
He star'd at the Pacific - and all his men
Look'd at each other with a wild surmise -
Silent, upon a peak in Darien."

From Oak Harbor, Ohio, Kenn writes: The verse above, the latter half of a sonnet, represented Keats's reaction after first reading the George Chapman translations of Homer's Iliad and Odyssey.  In modern language, Keats might have written, "Whoa!  This knocked my socks off!"  But fortunately he didn't.  His historically inaccurate, but surely vivid, reaction is still being quoted two centuries later as an example of how a work of literature can produce a powerful emotional response.

We thought about this last night, when we looked at a new book for the first time.  This is a really brand-new book: it hasn't been published yet, won't be out officially until October 16th, but the very first bound copies have just arrived.  And we can't help but have an emotional response to this book.  After all, we wrote it. 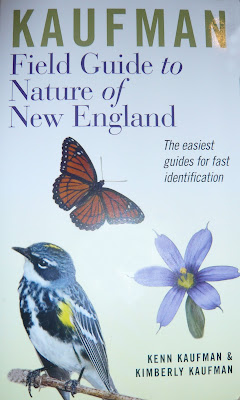 Kim Writes:  Today, I felt as though I wrote a song with Paul McCartney, climbed a mountain with Sir Edmond Hillary, discussed the power of the mind over the body with Rene Descartes, and wrote a speech with Martin Luther King.  I danced with Fred Astaire, rode a bus with Rosa Parks, sang a song with Adele, ran a relay race with Flo Jo, and chased villains with Batman.

---In other words: I wrote a book with my hero, Kenn Kaufman.

When Kenn and I announced to my family that we were going to write a book together, they were genuinely happy for me.  But to be honest, I'm not sure they could fully grasp what it meant for me to write a book with my Kenn. They are honest, hard-working people, and while we differ on some views of the world, we share a deep and abiding love for each other that can conquer any social or political divide.

After our book announcement, my youngest brother Aaron drew my name in the family's Christmas gift exchange. The gift he chose for me was a lovely shadow box, and with the gift was a hand-written card that I will treasure for the rest of my life.  In the card, Aaron said he thought this box would be a nice way to display my first published book.  And then, my little brother: the hardworking, tough as nails construction worker and football coach, ---said he was proud of me.  He will never know what that meant to me.

So, what do ya think, Aaron? 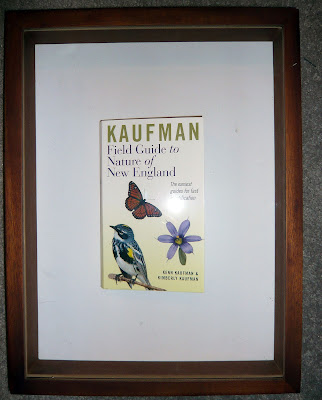 Looks pretty great in there, doesn't it?!?! 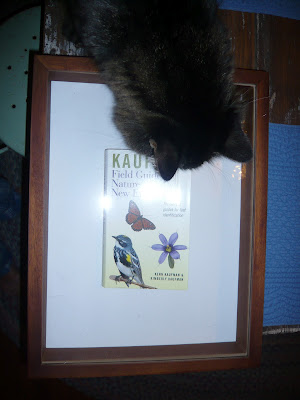 Even our cat Kirby can't wait to read the book!
Kenn and I had so much fun working on this book.  We spent many glorious hours exploring New England looking for anything that might catch the average nature enthusiast's eye.  We ate A LOT of clam chowder (my mouth is watering just thinking about it), played in tidal pools like a couple of kids, and searched and searched and searched for the mythical moose.  (Which I have STILL yet to see!).  Many of the people that helped us on it are near and dear to our hearts, making the book all that much more special. Many of my team at Black Swamp Bird Observatory participated in one way or another, and we were thrilled to work with Ken Keffer, Eric Eaton, and Eric Snyder.  Ken wrote the habitat section, Eric E. wrote the insect section, and Eric S. wrote the geology section - and they are wonderfully written.

Many aspects of natural history are illustrated for the first time in any publication using Kenn's method of digitally enhancing photos and trimming them from their backgrounds, creating digital illustrations. I am particularly happy with the way the wildflower and tree sections look using this method. 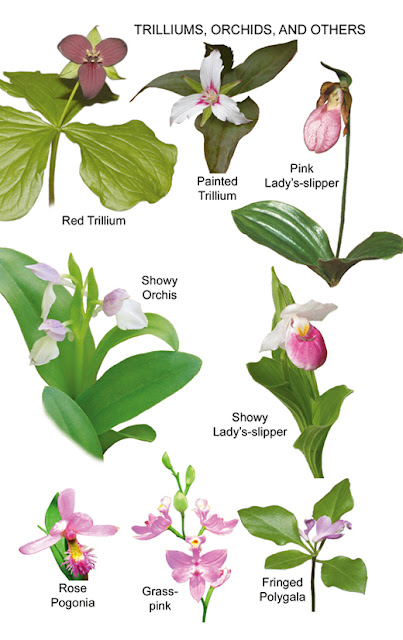 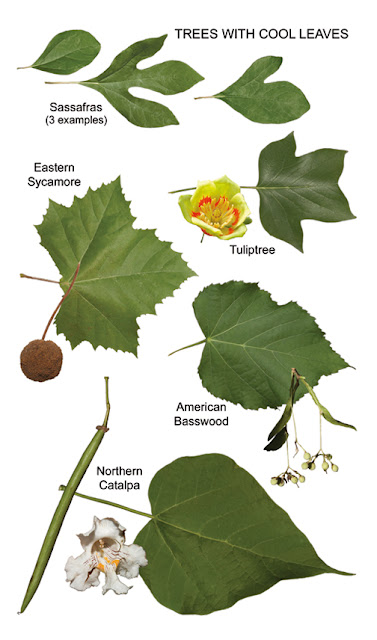 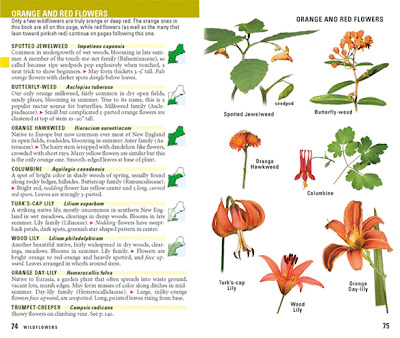 And, of course, the book includes some of my husband's wit.  For instance, in the fish section, the text for Black Crappie reads, "A popular fish, despite what its name might suggest to the uninitiated (it's pronounced like croppy, not crappy!)."

Right now, the book feels more like a dream than reality. I've held it in my hands over and over, poring over the pages and trying to wrap my head around the idea that I can lay partial claim to it.  I don't know if I will ever be able to express to Kenn how much it means that he would share this book with me.  He has worked nearly all of his adult life on writing books and articles that will encourage more people to fall in love with nature. In essence, he is sharing his entire world with me, now, and I am supremely humbled by this measure of faith.

The book isn't available just yet; the official release date is October 16th. I hope readers will find this book fun, engaging, and ultimately very useful in the field.  I know I can't wait to get back to New England and give it a good field test!  And who knows, maybe it will help me find a moose!
Posted by Kenn Kaufman at 11:49 PM 29 comments: