Gifts That Give Twice, Part 1: Great Reading All Year Long

From Oak Harbor, Ohio, Kenn writes: Two days from now, tens of millions of people will be storming the stores and decking the malls for the annual shopping explosion of Black Friday.  Perhaps you'll be among them, and if so, we wish you the best of success.  Perhaps, like us, you'll stay far away from stores on Friday, and take part in Shop Local Saturday at small businesses the next day. But if you're gearing up to shop for holiday gifts, I'd like to make a couple of modest suggestions.

Of course, buying gifts is already challenging enough. It can be tough to find just the right item for that special person. But buying a gift is an act that can have an impact in both directions: not only for the person receiving it, but back along the line for everyone involved in selling and producing that gift. So with some careful thought, not only can we thrill the recipient, we can also make a positive difference in the world in other ways. We can give a gift that will, in effect, give twice.

If you're reading this blog at all, you're probably involved with birding or nature study in some way. And if you are like Kimberly and me, you already think of birders and naturalists as a community, or even as a big, extended family. So here's the suggestion: think about buying holiday gifts in ways that will support the community. The more the birders support each other, the more support there will be for bird conservation and for the future of the natural world.

With that in mind, we're going to write a few blog posts with some specific ideas about things to buy and about where to buy them. The first one involves a fine idea for anyone who like birds, anywhere in North America.

Suggestion 1: Give a gift subscription to BirdWatching Magazine. 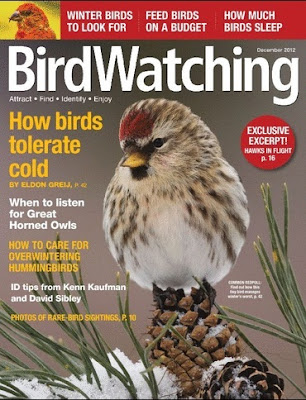 This fine magazine (formerly Birder's World) has been a staple of the birding community since the 1980s.  Earlier this year, despite heroic efforts by editor Chuck Hagner and his staff, longtime publisher Kalmbach concluded that they would have to cease publication.  Last month's issue would have been the last one -except that another experienced publishing company, Madavor Media, decided that BirdWatching was too good to allow it to slip away.  Madavor bought the magazine and arranged to keep publishing it without missing an issue.  Chuck Hagner and Matt Mendenhall are still editing the magazine. Established contributors like Pete Dunne, Laura Erickson, David Sibley, Julie Craves, and Eldon Greij have stepped up to keep the content flowing, and Brian Small and I are still producing our "ID Tips" columns for each issue.

But now here's my question for you: Will the birding community step up and show our support?  Will we show Madavor Media that they made a wise choice?  BirdWatching is a fabulous magazine (and not just because I write for it!), and any bird enthusiast on your list would love a year's subscription.  You can find all the info you need to subscribe for a friend (or for yourself) at this link.

From Oak Harbor, Ohio, Kenn writes:  Our book tour of New England was wonderful, but it was cut short by the approach of Superstorm Sandy.  We had to cancel our last appearances on October 29 and 30, and since all flights were cancelled as well, we drove our rental car back to Ohio through the rain and high winds, arriving safely at home on the 30th.

Once there, however, we were dealing with an ill wind of another kind.

As many of you will know already, Black Swamp Bird Observatory (BSBO) has been leading an attempt to stop construction of a large wind turbine at the Camp Perry Air National Guard Station, on the Lake Erie shore in the heart of Ohio's premier bird migration hotspot of Magee Marsh / Crane Creek / Ottawa NWR. This is the area popularly known as the "Warbler Capital of the World," the area that attracts tens of thousands of visiting birders annually, pumping tens of millions of dollars into the local economy.  For more on the spring birding in this region, see this link:  http://www.biggestweekinamericanbirding.com/
For more on BSBO's efforts regarding wind power, please see the second item under this link:  http://www.bsbo.org/

BSBO has been working to convince local officials to relocate the wind turbine project to another site that would be less threatening to bird populations. This effort has won the endorsement and support of other organizations, including National Audubon Society, Ducks Unlimited, League of Ohio Sportsmen, American Birding Association, American Bird Conservancy, Ohio Ornithological Society, and several others. In addition, both the U.S. Fish & Wildlife Service and Ohio's Division of Wildlife have submitted comments highly critical of the Environmental Assessment of the wind turbine project. In spite of all this opposition, the leadership at Camp Perry appears to be going ahead with their plans.

Currently there's an opportunity for citizens to send comments to the Ohio Department of Natural Resources (ODNR) regarding a "Federal Consistency review." Basically, because Camp Perry is on the lake shore, it falls under federal regulations applying to "Coastal Management." ODNR is required to accept public comments before certifying that the wind turbine project is consistent with the enforceable policies of the Ohio Coastal Management Program.

My take on it: the wind turbine project is NOT consistent with those policies. Even with a very narrow interpretation, Ohio Coastal Management Program Policy # 29, "Wildlife Management," requires that the Division of Wildlife is to protect native wildlife and to protect species threatened with statewide extinction. Allowing the wind turbine to be constructed at Camp Perry would represent a failure on that obligation.

Here's why. The Environmental Assessment (EA) of the project - available at    this link - is totally inadequate regarding threats to bird populations.

The EA totally fails to acknowledge the fact that the lake shore represents stopover habitat, where vast numbers of migrants are pausing during their migrations to rest and feed before continuing their journey. The EA repeats (on p. 61) the tired argument that "a vast majority of nocturnal migration of song birds, waterfowl and shore birds occur at altitudes greater than the height of most modern utility scale wind turbines." This is true - most nocturnal migration occurs at least several hundred feet above the ground - but it's irrelevant when we're talking about stopover habitat, where birds are dropping in and taking off in the dim light of predawn and dusk. Anyone who has been out on the Lake Erie beach at dawn on a good spring migration day will know that vast numbers of birds are flying low, paralleling the shore, in a repositioning flight at dawn. During their arrival, departure, and repositioning flights, these birds will be very vulnerable to more tall structures in the air column.

As another example of inadequacy in the EA, it refers (on p. 60) to numbers of waterfowl using the Darby Unit of Ottawa NWR, and backs it up with duck survey results from October 4, 2011. As any experienced birder or biologist knows, peak waterfowl migration in this area occurs in late fall. The use of numbers from the beginning of October must reflect either ignorance or a willful attempt to mislead.

The EA also understates the threat to local Bald Eagle populations, which are just now bouncing back to healthy levels after being almost wiped out. Ironically, the EA makes reference to the Altamont Pass wind factory in California, without mentioning the fact that alarming numbers of Golden Eagles and other raptors have been killed there.

In short, the sections on birds in the EA are slanted, inadequate, and inaccurate. It's no wonder that both the federal and state wildlife agencies were sharply critical of the EA. The fact that their comments (and ours) are being ignored should be deeply disturbing to anyone who cares about wildlife and about transparency in government.

The public is allowed to comment on this from now through November 30, and you don't have to be a resident of Ohio to comment. To see the information on the comment period, here's the link:
The Camp Perry wind turbine is currently the first item under that link, under Consistency ID # 2012-073. As you'll see at that link, comments can be emailed to the Department of Natural Resources at  coastal.consistency@dnr.state.oh.us  - but the comments have to be sent in before the end of the day on November 30th. And to be effective, comments should specifically mention flaws in the Environmental Assessment and its failure to address Ohio's Coastal Management Program.

I know, this all sounds like a lot of government red tape.  To anyone who has actually read this far: Thank you!  I know that for some, birding is an "escape," and they'd rather not think about conservation issues.  We'd rather not have to think about them either. But this will be harder to ignore if this project is allowed to proceed without opposition, and if Camp Perry puts up a giant bird-killer in the middle of prime stopover habitat.

This is a test case.  If this single turbine is built, it will almost certainly open the door for more.  And if we allow wind turbines right in the middle of the most sensitive habitat, in the worst possible place, how will we ever keep them out of any important bird habitat?

If you have read this far, would you please consider spending a few more minutes and emailing comments to the Ohio Department of Natural Resources at the link above?  And if you want to do more, would you consider checking out the additional information on the BSBO website and writing letters to a few key individuals?  This kind of thing is no fun - believe me, we know.  But your effort might make all the difference in ensuring that future generations will be able to witness the miracle of bird migration.