From a hotel somewhere in Harlingen, Texas, Kimberly Writes: Kenn and I are in Texas for the Rio Grande Valley Birding Festival where Kenn will be leading several walks and giving a special presentation tomorrow night.

We arrived yesterday afternoon, made a brief stop at the convention center where the festival headquarters are located, and headed for our hotel.  As we were unpacking the second load from the car, I noticed a couple birds perched atop a smallish shrub in the vacant lot beside the hotel.  As we stepped off the pavement to get a better look, we were stunned to see that they were two White-tailed Kites!  Well, we took our white tails right back in to our hotel room to fetch optics and cameras, and when we came back there were THREE circling above the hotel.  I managed to shoot about 30 seconds of video of one of the birds as it "kited" in one spot.

Wait for the 13 second mark and watch as the bird cuts out and heads for parts unknown.  Look at those long, slender, powerful wings.  What a gorgeous bird!

Not a bad way to start, eh?!  We also had Yellow-throated and Orange-crowned Warblers in the trees in front of the hotel, too!

Kenn is out leading a six hour Advanced Birding workshop today, and I opted to stay at the hotel to try and get some work done.  I decided that I would take frequent breaks to wander around the hotel grounds and see what birds I could add to our hotel yard list!  First of all, it's chilly in South Texas today!  The wind was really whipping and the temp is barely 70. It was 92 when we arrived yesterday, so a cold front is obviously passing through.   ﻿

Here's what the habitat around the hotel looks like. 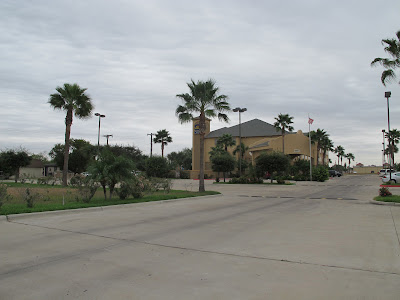 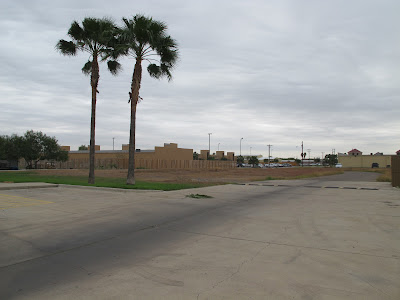 ﻿Yeah.  Not exactly inspiring, is it?  But I did find some decent birds.  Of course there were Great-tailed Grackles, Northern Mockingbird was no surprise, and I saw a few Chipping Sparrows.  A few Laughing Gulls flew over, a Loggerhead Shrike showed up in the same shrub that the Kites were in last night, and I saw another Yellow-throated Warbler (always a treat!).  I was delighted when a Kingbird came in and landed on the wire right above me and I snapped a couple shots of him before he flew off.

I'm fairly certain this is a Couch's Kingbird (Tyrannus couchii). The yellow goes way up the chest; the tail is notched and dusky gray-brown rather than black; and it has a heavy-ish bill.  Admittedly, I don't have much experience with kingbirds other than Easterns, so I could be wrong. I would normally ask Kenn for confirmation, but he isn't here, and I'm not afraid to misidentify something.  So, here it is.  Let me know if you agree with my indentification. 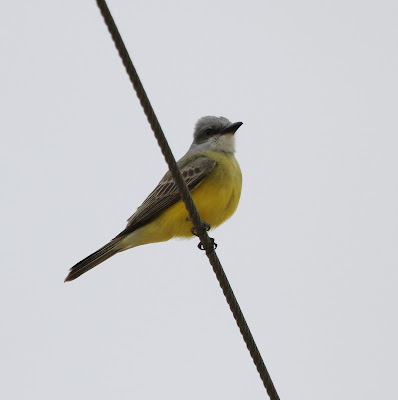 As I was standing there admiring the Kingbird, I was daydreaming about how cool it would be if I found some really awesome bird at the hotel while Kenn was away today.  And no kidding, just as I was smiling at the thought, I heard these raucous calls coming over the hotel. I spun around just as 17 "something-or-others" came rocketing past. I was totally unprepared (and so was the camera!), but I couldn't resist firing off a few quick shots to see if I could figure out what they were.

Now, please promise not to laugh at how crappy this photo is. 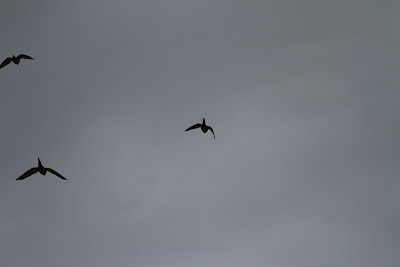 I know what you're thinking. "Uh, Kim, we hate to tell you, but you really suck at photography!" But wait. I've managed to learn a thing or two from Kenn as he works his magic in Photoshop.  So I blew the photo up, cropped the image to focus in on one bird, and pumped up the light. 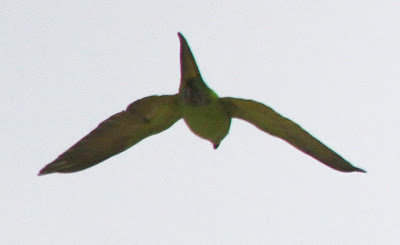 I don't expect to get any calls from Birdwatching or WildBird Magazine asking me to be their official bird photographer or anything, but you can at least see a bit more detail. I noticed that the bird appears greenish-yellow overall, has yellow undertail converts, and a smallish beak.  After looking through the field guide and doing some research online, my guess is Green Parakeet (Aratinga holochlora).  Do you agree?

If you'd like to see some truly spectacular images of Green Parakeets, here are some AMAZING photos by the supremely talented Greg Lasley.

I'm proud of the fact that I had a great time birding and the only fuel it required was some Birds and Beans - Bird Friendly Coffee that I packed in my carry-on (they also have it for sale at Festival headquarters!). All-in-all, not a bad day of birding for a person stuck in a hotel for the morning.