Showing posts from April, 2011
Show all

Every Warbler Tells A Story 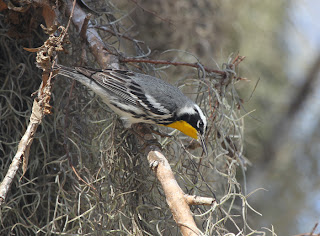 From Oak Harbor, Ohio, Kenn writes: Here in northwestern Ohio, “the Warbler Capital of the World,” the warblers are just beginning to show up. They will be flooding through here, in dizzying numbers and variety, in just a couple of weeks. Right now, we’re in the peak stage of eager anticipation for these tiny, active, colorful birds. Our friend Liz McQuaid recently had a Yellow-throated Warbler in her yard in the Cleveland area, a little east of here. (Not this one; the bird in the photo above, poking about in Spanish Moss, is one that Kimberly and I photographed in Texas.) Yellow-throated Warbler is mainly a southern bird, uncommon this far north, but what was really fascinating about Liz’s bird was that it was coming to her suet feeder. Warblers in general are not feeder birds. Although Pine Warblers often come to suet feeders, especially in winter, this is not a well-known behavior for the Yellow-throated Warbler. Hearing about the feeding behavior of this individual set me to
8 comments
Read more
More posts