From Rocky Ridge, Ohio, Kenn writes: If you’ve traveled much in North America, especially in the West, your life list may soon go up by two species. 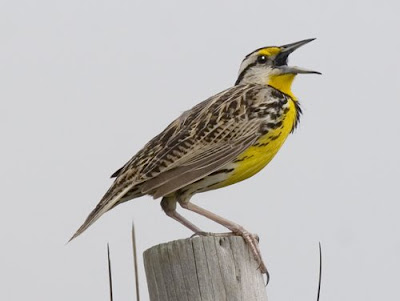 Something to sing about: we may have three meadowlark species.
The October 2008 issue of The Auk, the scientific journal of the American Ornithologists’ Union (AOU), was mailed late, and I just received my copy. But among the technical papers in this issue were two that could affect how some birds are classified. One study presented evidence that North America has three species of meadowlarks, not two. Another paper gave evidence that the Western Scrub-Jay should be split into two species.
Changes like this won’t become official until they’re voted on by the AOU’s Committee on Classification and Nomenclature (more affectionately known as the AOU Check-list Committee). This is the committee that establishes the standardized names and species limits that we see in field guides and bird checklists for North and Central America. But with the publication of these two new studies, it becomes likely that the committee will split these birds, perhaps as early as next July.
Meadowlarks in North America have long been divided into two species: the Western Meadowlark (Sturnella neglecta) in the West (naturally), and the Eastern Meadlowlark (Sturnella magna) in the East as well as in desert grasslands of the Southwest. Many experts have already pointed out that the desert-grassland "Easterns" look and sound somewhat different from those in the East. It had been suggested that they might represent a separate species. Now there’s good evidence for that: Keith Barker, Arion Vandergon, and Scott Lanyon studied mitochondrial DNA and other genetic markers for meadowlarks from all parts of their range, and found that the desert-grassland population was very distinct. Sturnella lilianae would be the scientific name of the "new" species; its English name might be Lilian’s Meadowlark, but the AOU will have to decide. Whatever it’s called, if you’ve seen "Eastern Meadowlarks" in southern Arizona or New Mexico or far western Texas, you can count them as this new species as soon as it’s officially "split." 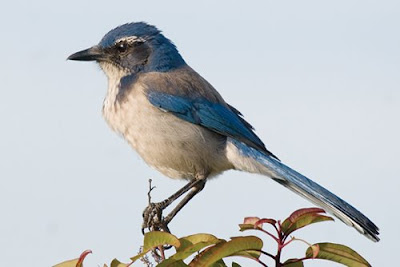 Western Scrub-Jay: scrub that name, replace it with two others.

As recently as the 1980s, we had just one species of "Scrub Jay" in North America. Then the Florida Scrub-Jay and the Island Scrub-Jay (of Santa Cruz Island, California) were classified as separate species. Now there’s good reason to say that the remaining population, currently called Western Scrub-Jay, is really two species. Kathleen Delaney, Saba Zafar, and Robert Wayne studied the DNA of these jays and found that they divided into two groups that probably have been isolated from each other for more than 300,000 years. These authors suggest dividing Western Scrub-Jay into two species: California Scrub-Jay (Aphelocoma californica), a more richly colored bird found from extreme southern Washington south to Baja, and Woodhouse’s Scrub-Jay (Aphelocoma woodhouseii), a duller and grayer bird found from Nevada and extreme eastern California east to Texas. (Brian Small and I will be talking about this split in our "I.D. Tips" column in the March-April 2009 issue of Birder’s World.) There's a messy spot in western Nevada where the two may be interbreeding, and there's a population in southern Mexico that may be yet another separate species, Sumichrast's Scrub-Jay. But the split of the Western looks likely.

Again, neither of these splits will be official until the AOU's committee votes on them. But if you’ve seen them, you can count them as soon as the split is formalized -- so don’t pass up a chance to see birds like this and, so to speak, "put them in the bank." Or just enjoy such subtle variations, whether they count for any kind of list or not!
Posted by Kenn Kaufman at 12:44 AM