From Port Clinton, Ohio, Kenn writes: We braved the intense cold and the ice-covered roads last night to go to band practice, and then the weather socked us anyway: Sully, our lead guitar player, was called away for an emergency having to do with pipes freezing and bursting. The rest of the band spent a while working out chord progressions of new material anyway before calling it a night.

At some point, messing around, I started playing the famous bassline from the hit "Under Pressure" by David Bowie and Queen -- the same bassline that was lifted, essentially note for note, by Vanilla Ice for his hit single rap classic "Ice Ice Baby." Kim had performed this song a couple of times with her old band, Four Thorn Rose, not as a planned part of the show but to fill in time while someone changed a broken guitar string. Sure enough, as soon as I started playing the bassline, Kim jumped in with the lyric, delivering it with tons of rapper attitude: Will it ever stop, yo -- I don’t know ... Deadly, when I play a dope melody, anything less than the best is a felony ... Girls were hot wearin' less than bikinis, Rockman lovers drivin' Lamborghinis ... ice, ice, baby ... On and on, a rap anthem, all the more authentically gangsta-ish because it’s based on a stolen bassline. Fletch jumped in on drums, and the handful of other people hanging around at Mango Mama’s watched in awe as Kim rapped out this long long song without missing a beat. 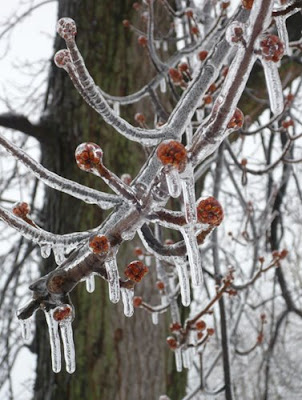 We can’t help thinking about ice right now. It has been wickedly cold the last few days; on Sunday, when we had expected to do the Fremont Christmas Bird Count, the temperature went down to 4 Fahrenheit with wind chills of 25 below zero. The ice storm that we had Friday morning -- the last time the temp was barely above freezing -- coated everything with thick ice that’s still there. In a separate post, we’ll talk about how the birds are faring in this weather. But for anyone who keeps bird feeders, this is the weather in which the birds need help the most. They can find food under snow, but when ice locks things up, the birds can be in serious trouble.

After all this cold weather, we’re looking forward to going away -- to Antarctica! I know from previous experience that the weather is surprisingly mild at this season. We travel by ship along the coastline, and the temperature rarely gets much below freezing. It would be different, it would be unimaginably cold, if we went to the Antarctic interior, but we wouldn’t be seeing birds there. So we’ll explore the islands and the coast, and we’ll see lots of ice, but we won’t encounter the kind of intense cold that has hit the American Midwest the last few days. 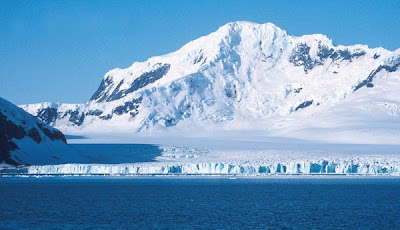 Coronation Island, in the South Orkney Islands, off the tip of the Antarctic Peninsula. Kenn took this photo on his third Antarctic trip in 1992.