By Kimberly Kaufman - February 26, 2015
Another spectacular day on the mighty Amazon River and smaller tributaries. And just wait until you see what followed along on our evening skiff ride! Ho. Lee. Cow! (Er, dolphin!) 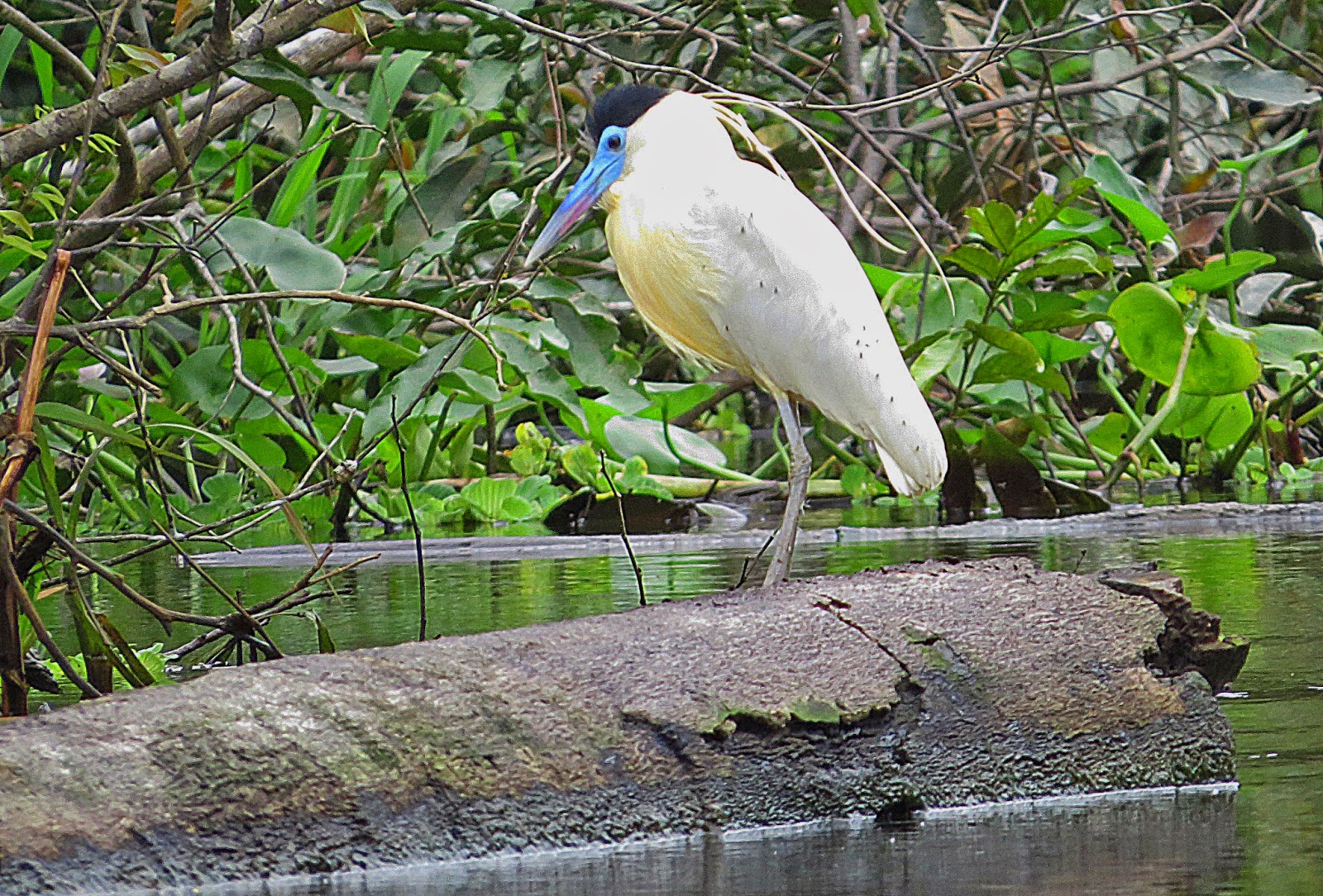 The lovely Capped Heron was a highlight bird of the trip! 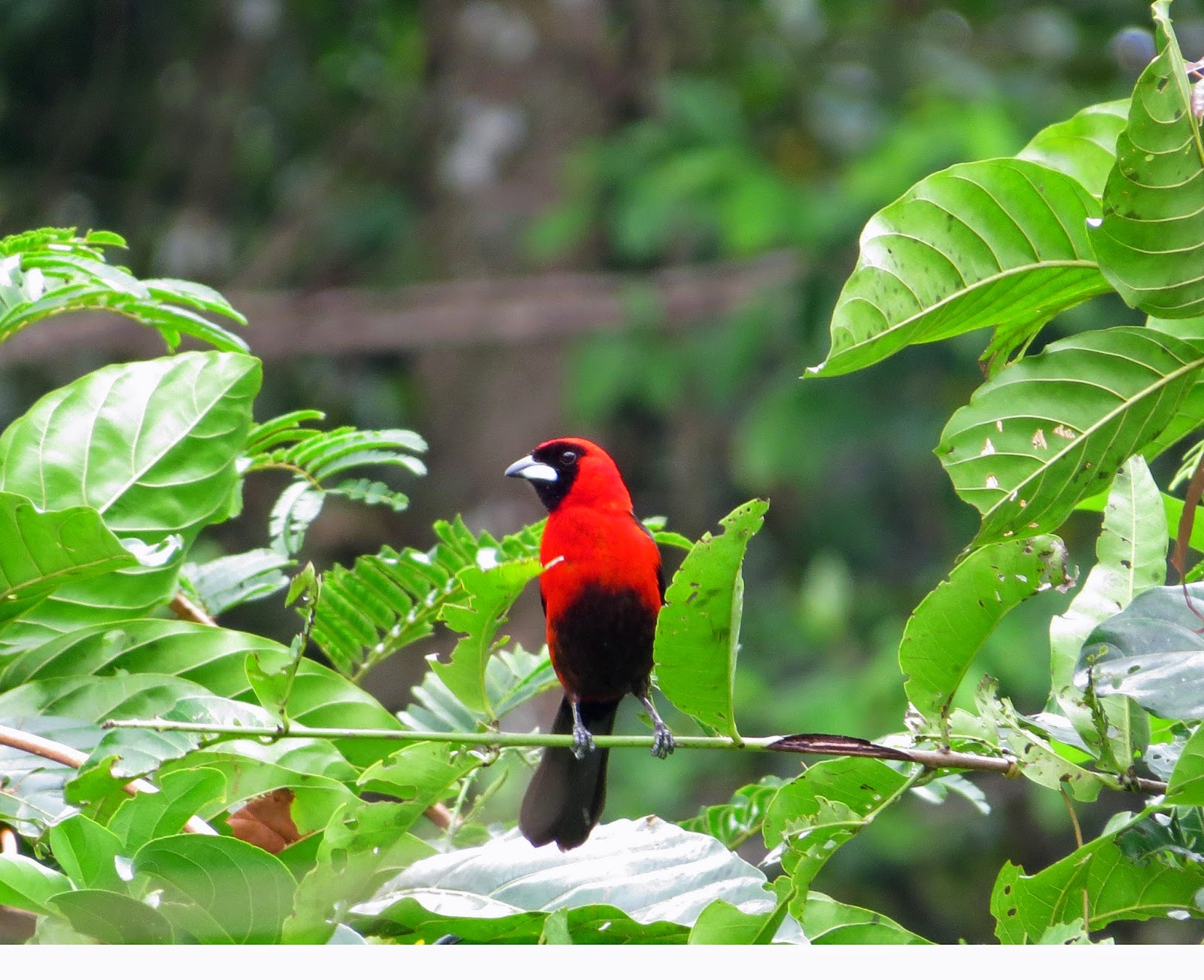 Masked Crimson Tanager
Since this bird is closely associated with water, traveling by boat is a great way to see it! 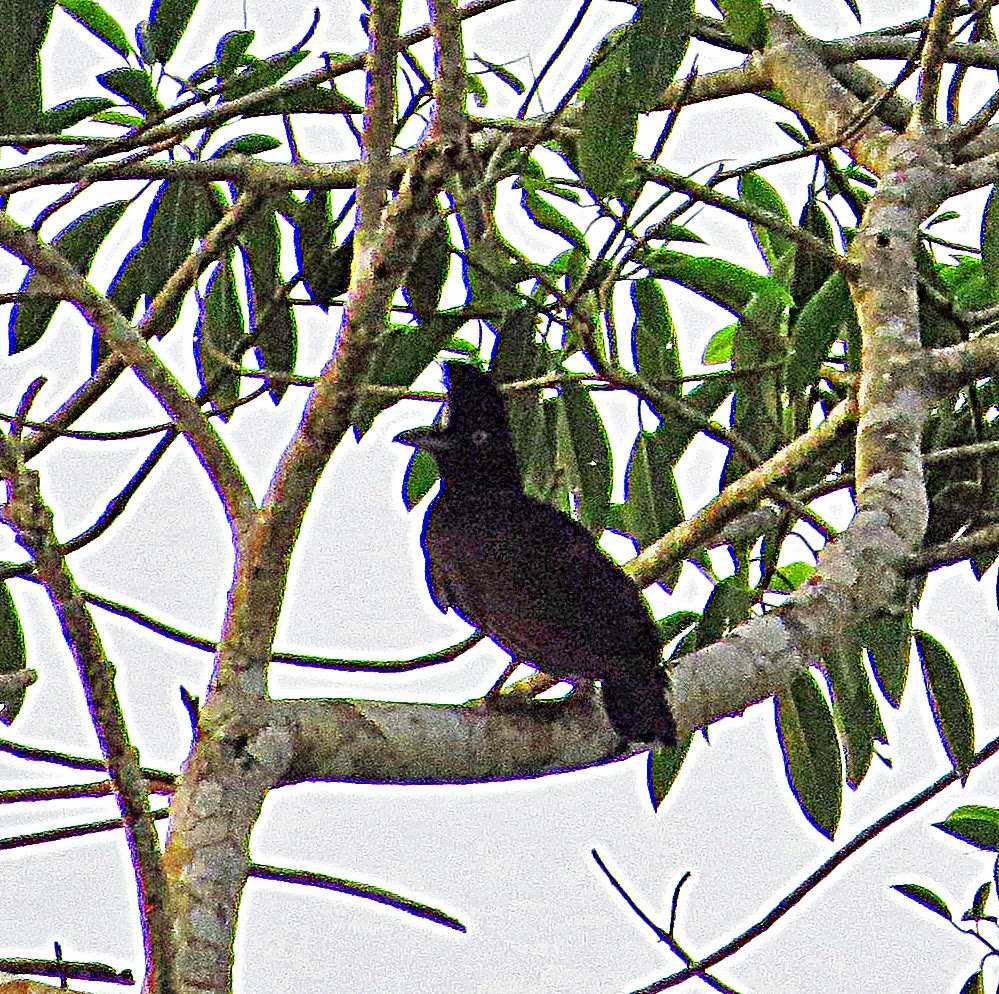 Cropped at a very long distance, in the shade, from a moving boat! (Not bad for my little Canon SX50, eh?!)In addition to that wonderful crest, both males and females have an inflatable throat wattle that they extend during displays. The wattle is longer in the males, and can reach up to 14 inches. When fully extended, the crest curls foward over the face, thus the name Umbrellabird. 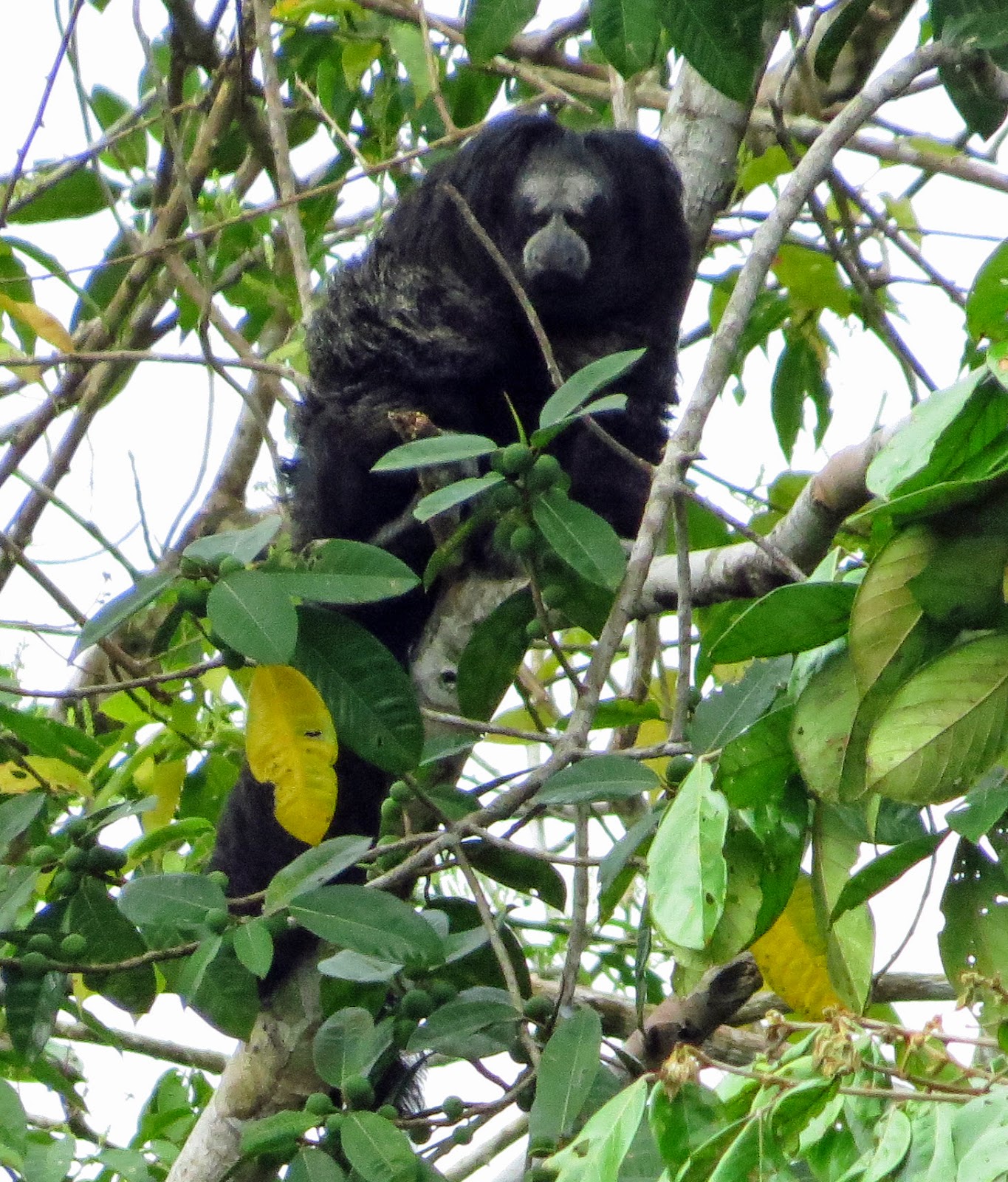 We were fortunate enough to get great looks at this Monk Saki Monkey.
These woolly monkeys are almost entirely arboreal, rarely going to the ground. 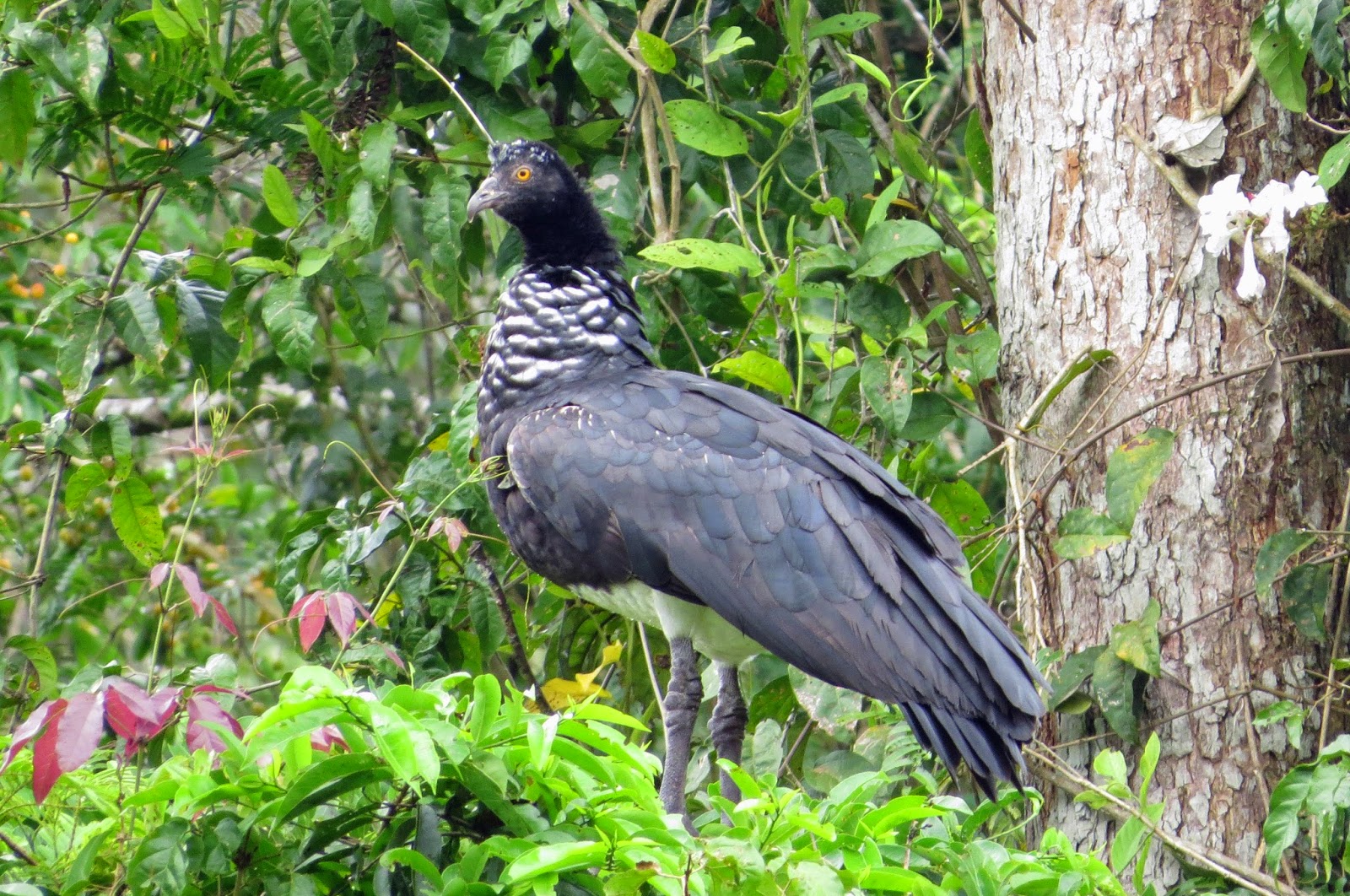 Horned Screamer! (And, yes! They're as exciting as the name implies!)
This massive bird (33–38 inches long and 7.7 lbs) gets its name from that long, spiky projection growing out of its head. It's a unique feature among all the birds of the world, and what's really bizarre is that it isn't a feather! The spike is a cornified structure that is loosely attached to the skull. And though it will sometimes break at the tip, it grows continuously throughout the birds' life. 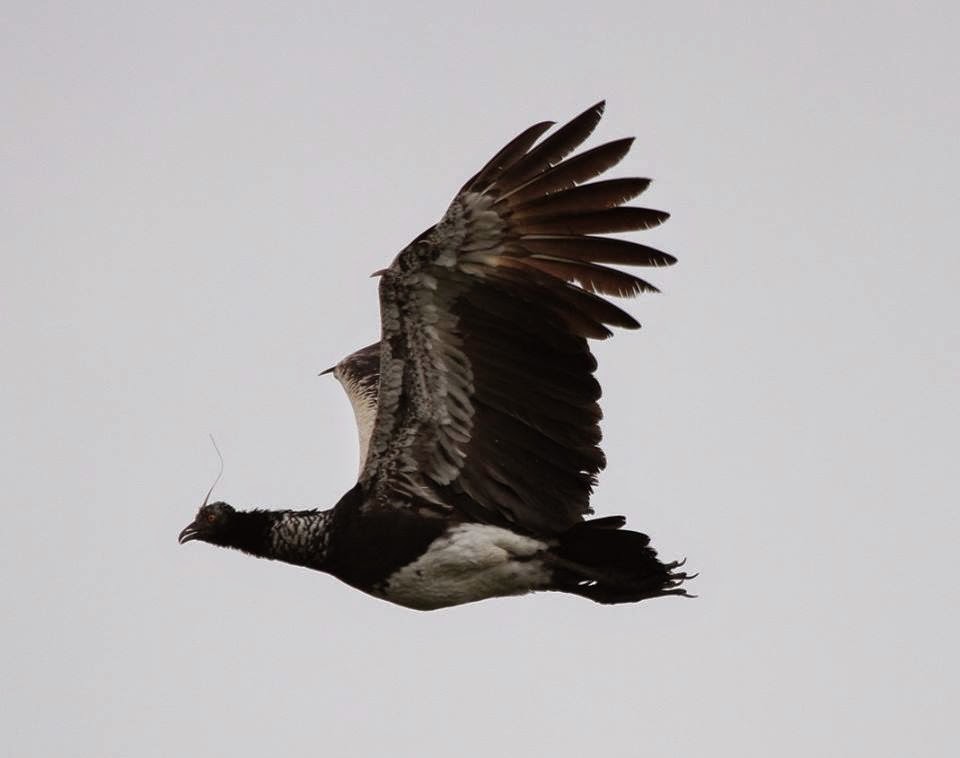 Horned Screamers also have two sharp spurs on the wings.
You can see them clearly in this fabulous photo that Kenn took!

For an example of the "Screamer" portion of its name, click here:
http://www.xeno-canto.org/explore?query=Horned+Screamer

Yes, that's a bird on that branch! What outstanding camouflage, eh? Potoos are
nocturnal insectivores, "hawking" from perches for aerial insects. They live out
much of their lives on broken branches, even laying their single egg and raising
their young at the broken end of a snag.

Kenn describes Potoos as looking like a mixture of dryer lint and tree bark! And he describes the voice of the Great Potoo as "something that sounds like it's trying to win a vomiting contest!" But I'll let you be the judge.

We ended this wonderful day with an evening skiff ride. And with the sun setting in the most dramatic fashion... 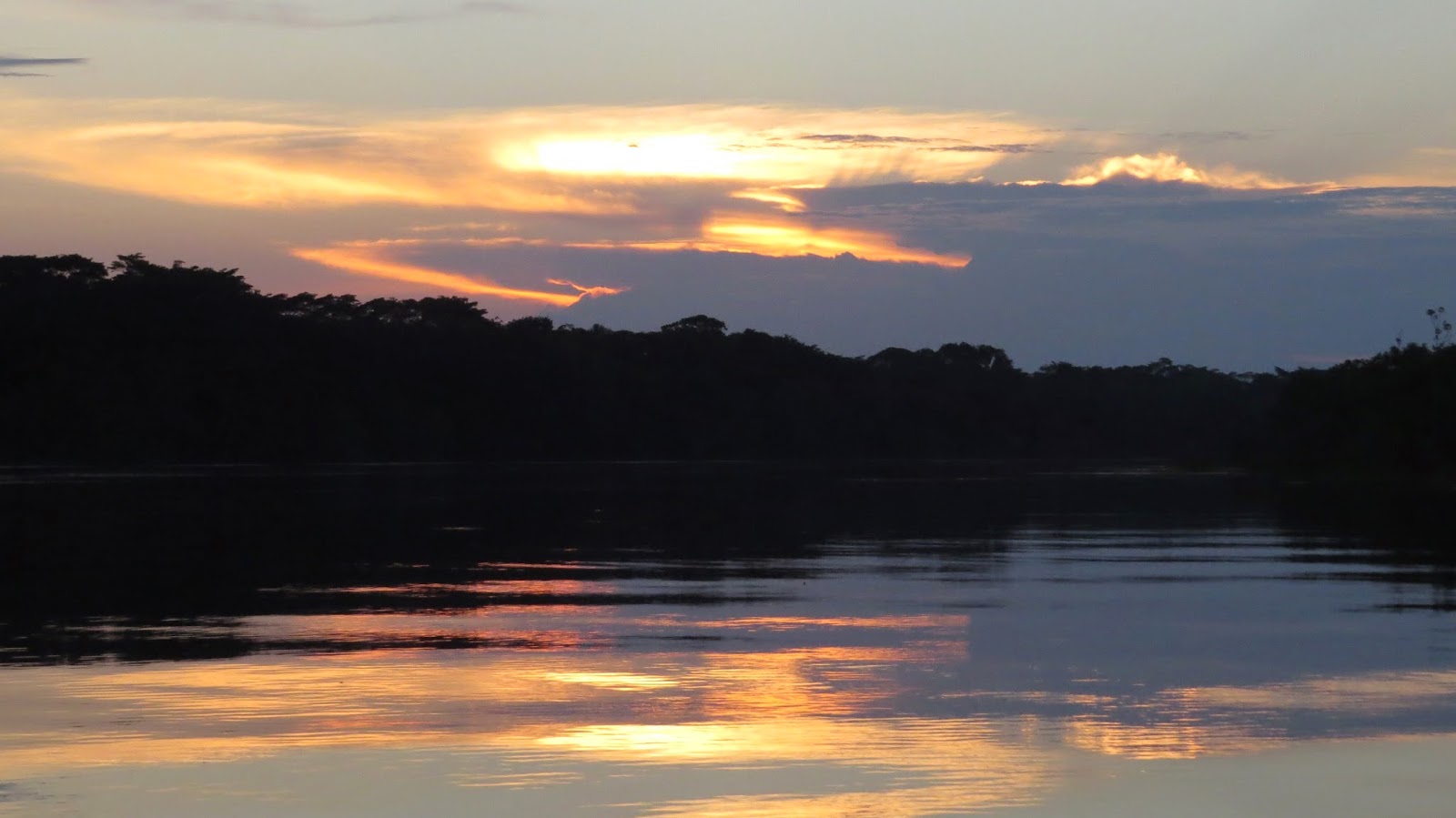 ...we were suddenly accompanied by these magical creatures. 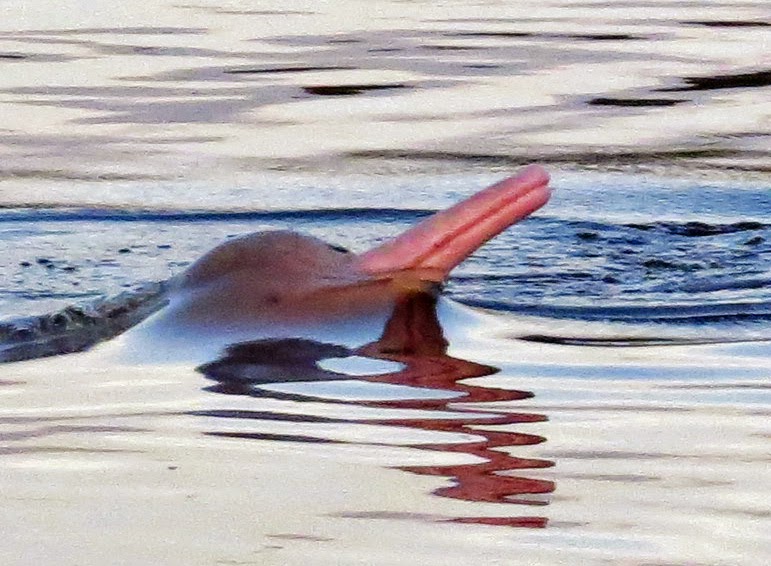 Before our trip to Peru, I'd honestly never even heard of Pink Dolphins. And, even if I had, I don't know that I would have believed they were real until I saw them with my own eyes.

Amazon River Dolphins are the largest freshwater cetacean, reaching a length of 5 - 8 feet long. They have very long beaks (they look like giant pink hotdogs when they poke up out of the water), and while they're mostly grayish/pink in color, when they get excited, they turn the most ridiculous shade of Pepto-Bismol pink! (No, I'm not making this up! And, no, I haven't been drinking.)

The dolphin in this picture is somewhere in between gray and pink. During our trip, we didn't actually encounter any that were bright pink, but I've seen photos, and it's astonishing!