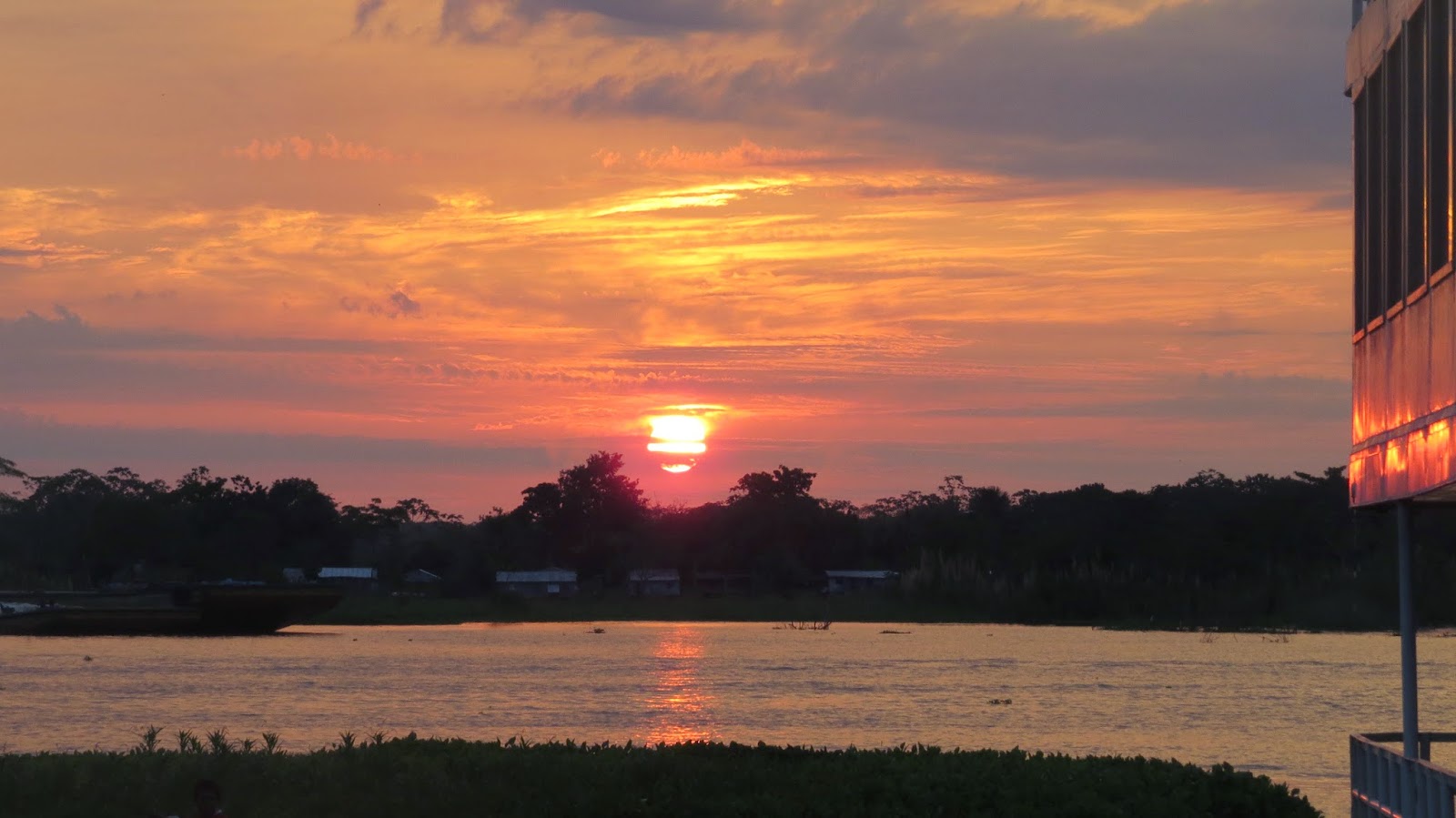 ...and a very cool surprise: a visit to a habitat known as white-sands forest. If you look at the descriptions of habitats in the field guide to Birds of Peru, you'll learn without reading a word how exciting this habitat is for birders. The paragraph describing white-sands forest is nearly three times as long as the descriptions of other habitats!

Tropical forests occurring on white-sand soils have a unique structure and are famous for their endemism. It took some special arrangements to visit this reserve and we were only there briefly. We dipped on the endemic species in the area, but it was still wonderful to experience a new habitat type! (And we did see some really cool things while we were there!) 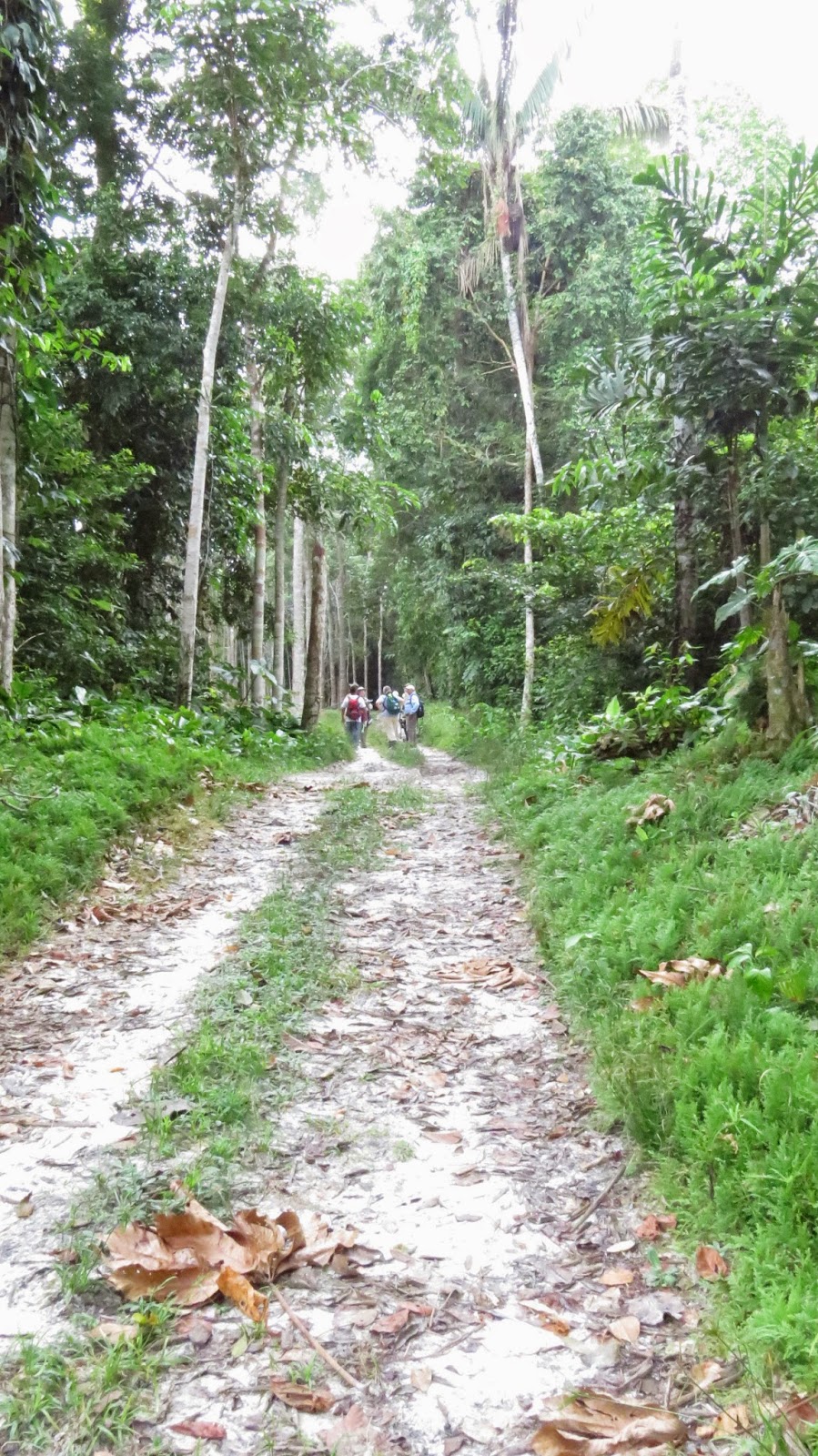 The road into the white-sands forest habitat beckons. 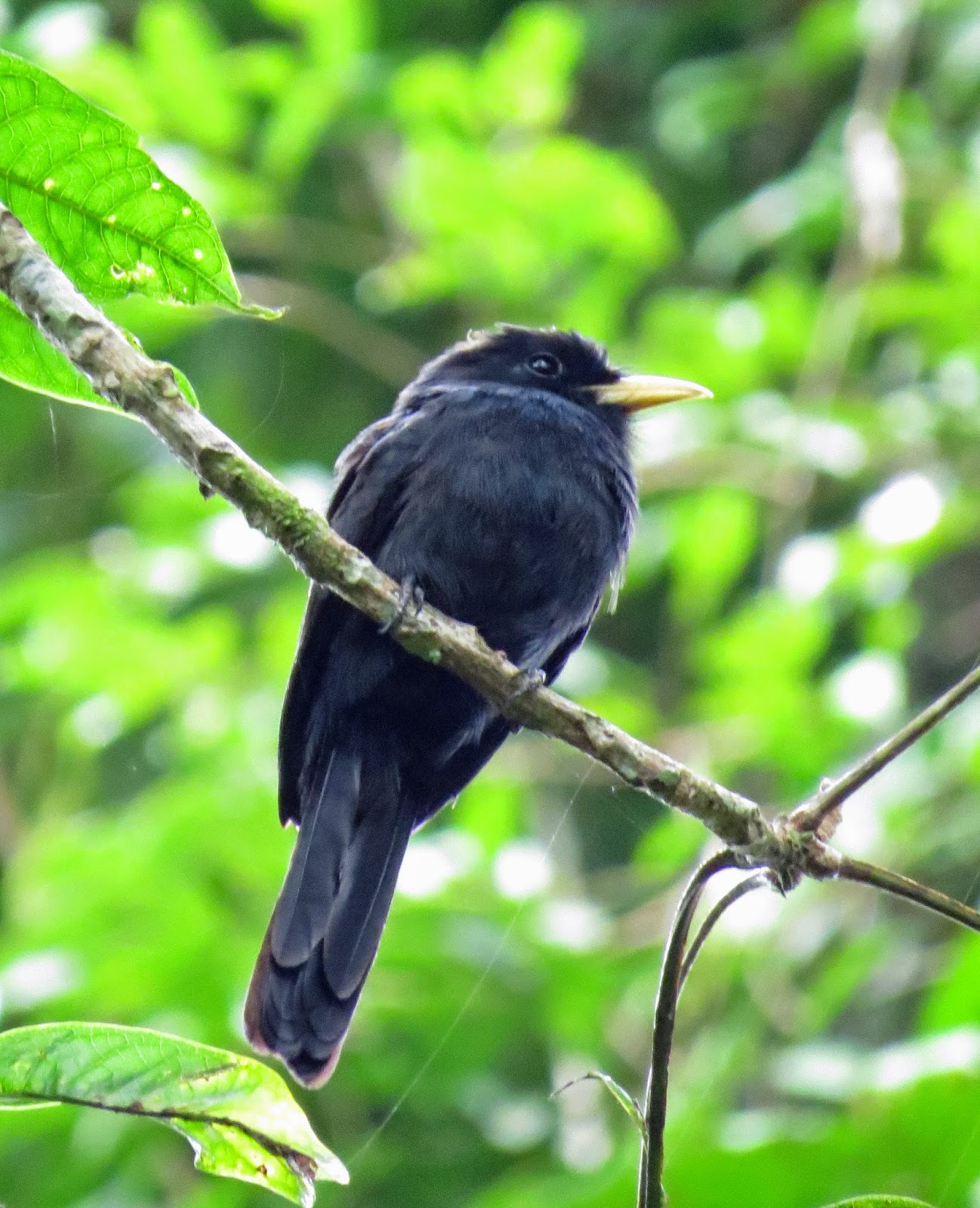 Yellow-billed Nunbird (Monasa flavirostris) is a species of
puffbird in the Bucconidae family. Smaller, quieter, and less conspicuous
than the other nunbirds, they're considered rare to uncommon,
so we were pleased to have such wonderful looks at this individual. 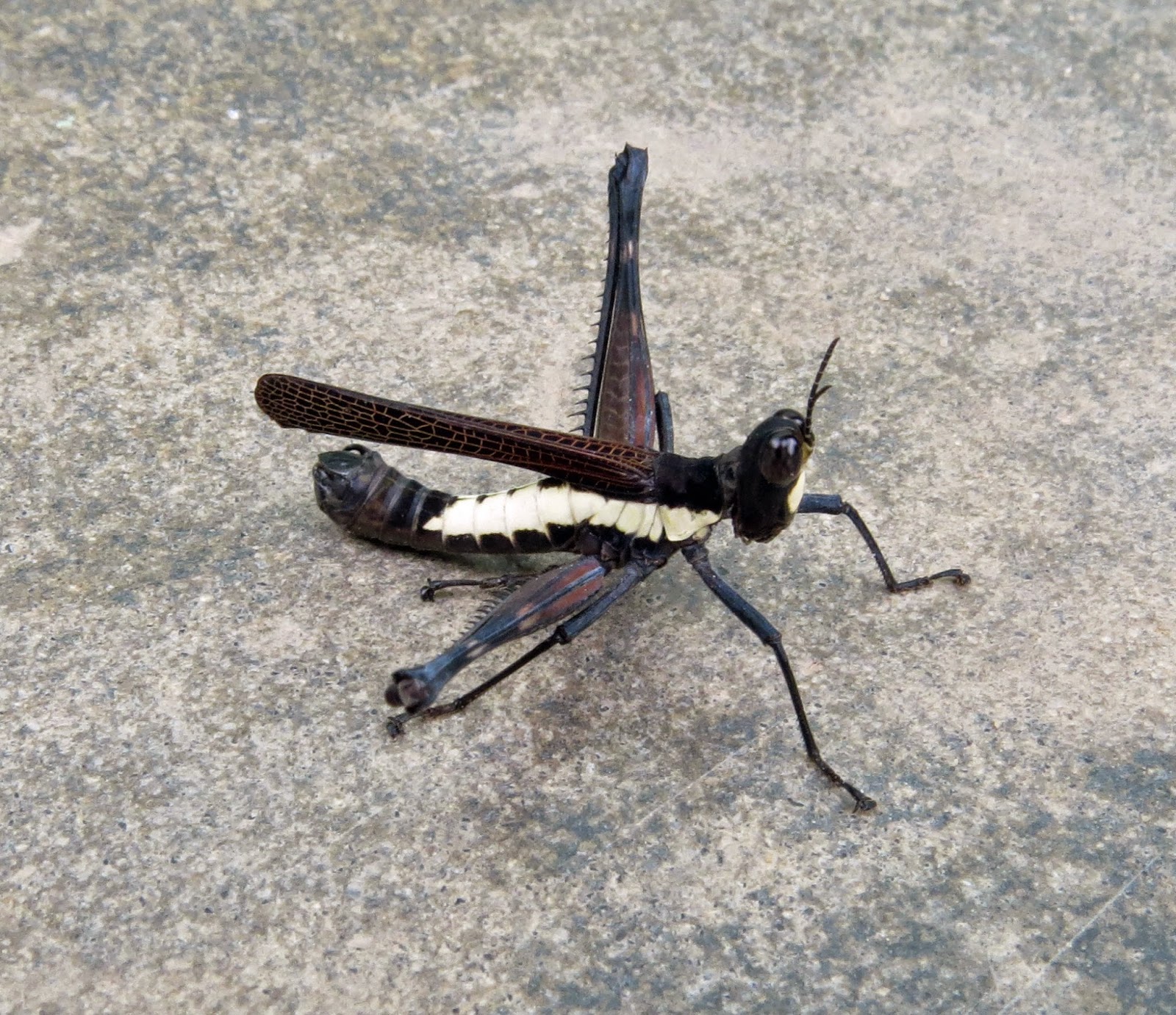 I'm not 100% certain, but I think this might be a Black-and-white Monkey Hopper (Eumastacidae). (My alternate name would be Ninja Grasshopper!) 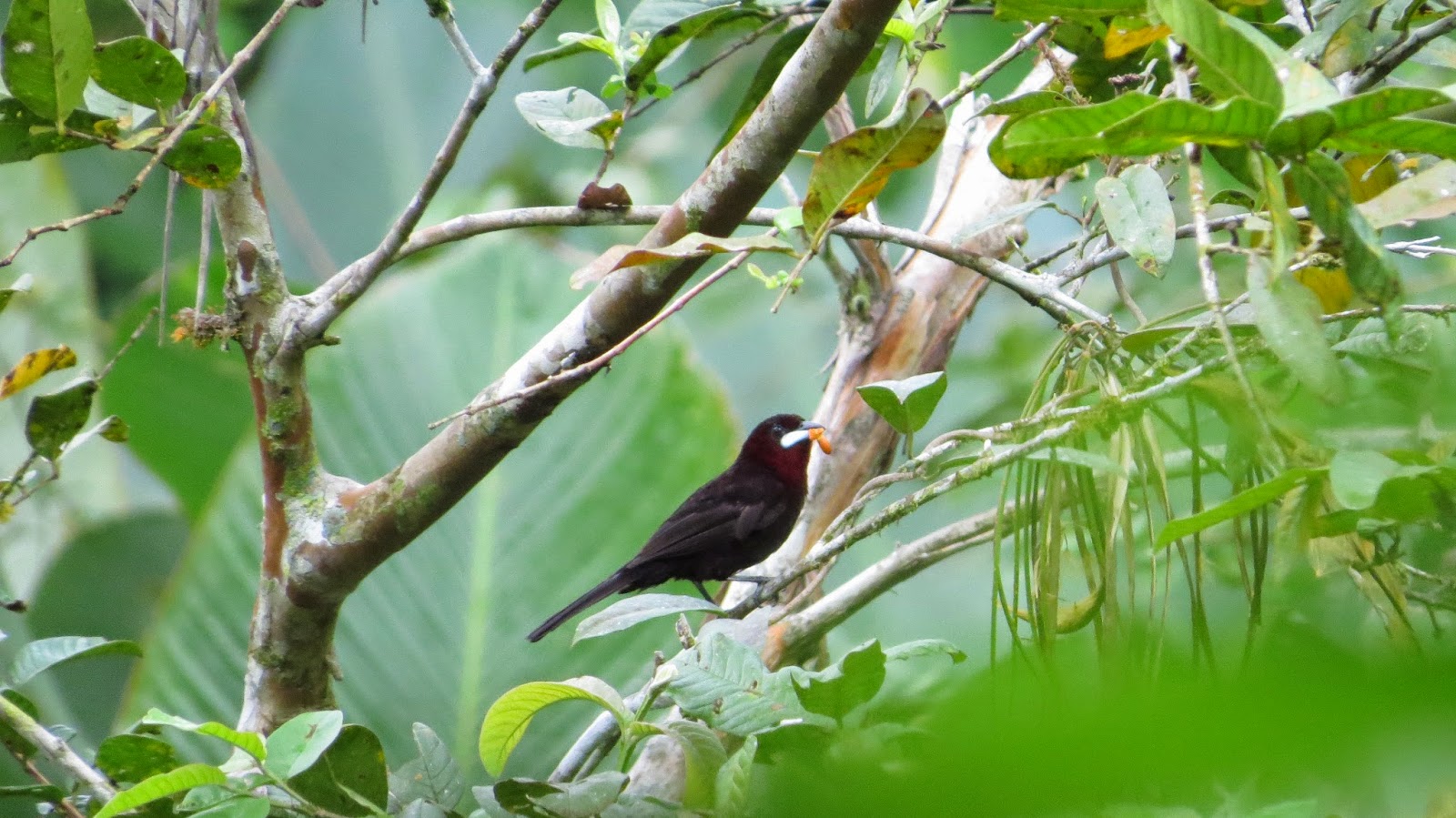 That slash of white isn't something stuck to this bird's face,
it's the mark that gives the bird its name:
Silver-beaked Tanager (Ramphocelus carbo)!

Silver-beaked Tanagers were common throughout our trip. They're active birds, making them a challenge to photograph (at least for me!) 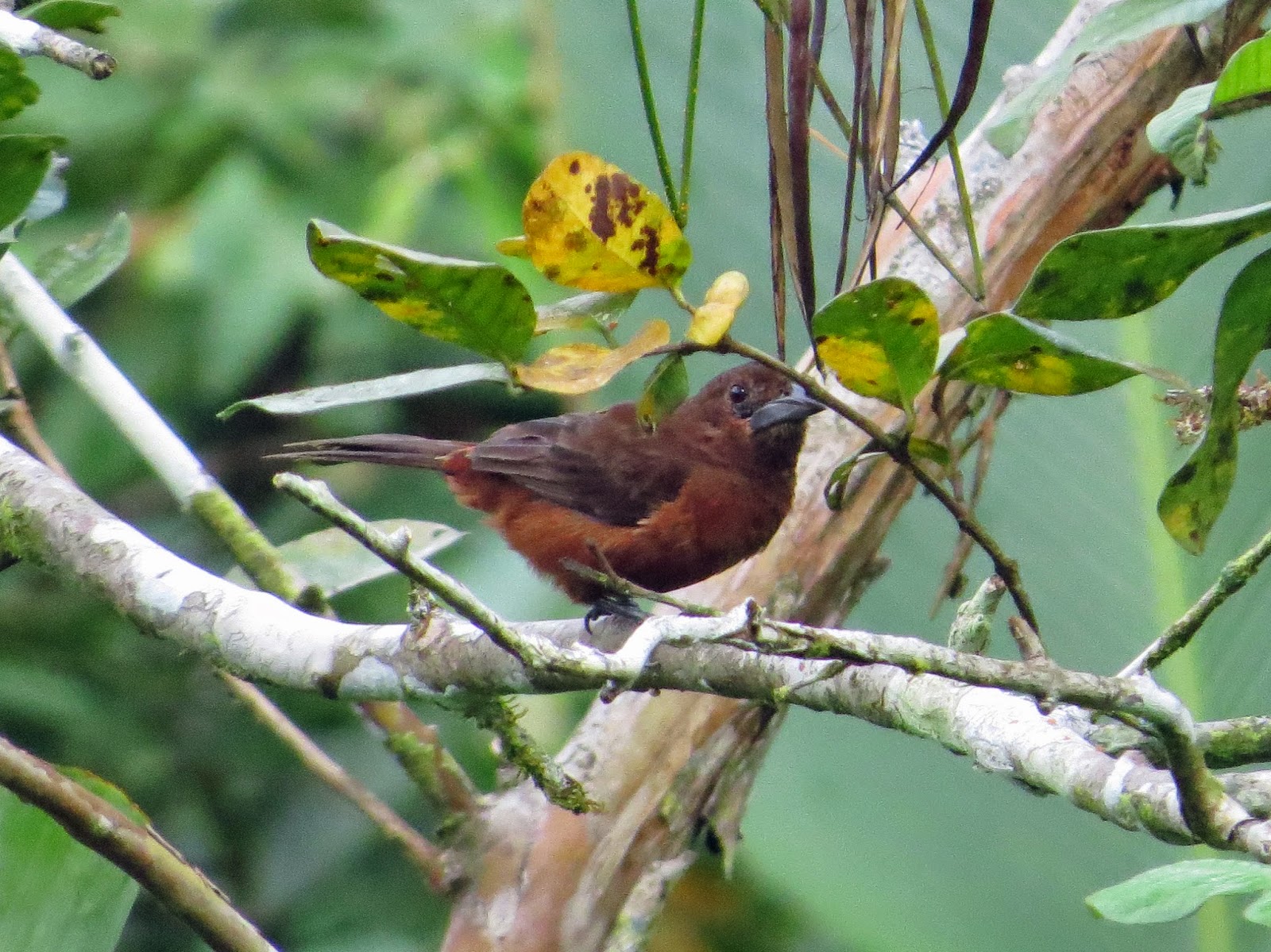 Though they aren't nearly as flashy as the males,
female Silver-beaked Tanagers are lovely in their own way. 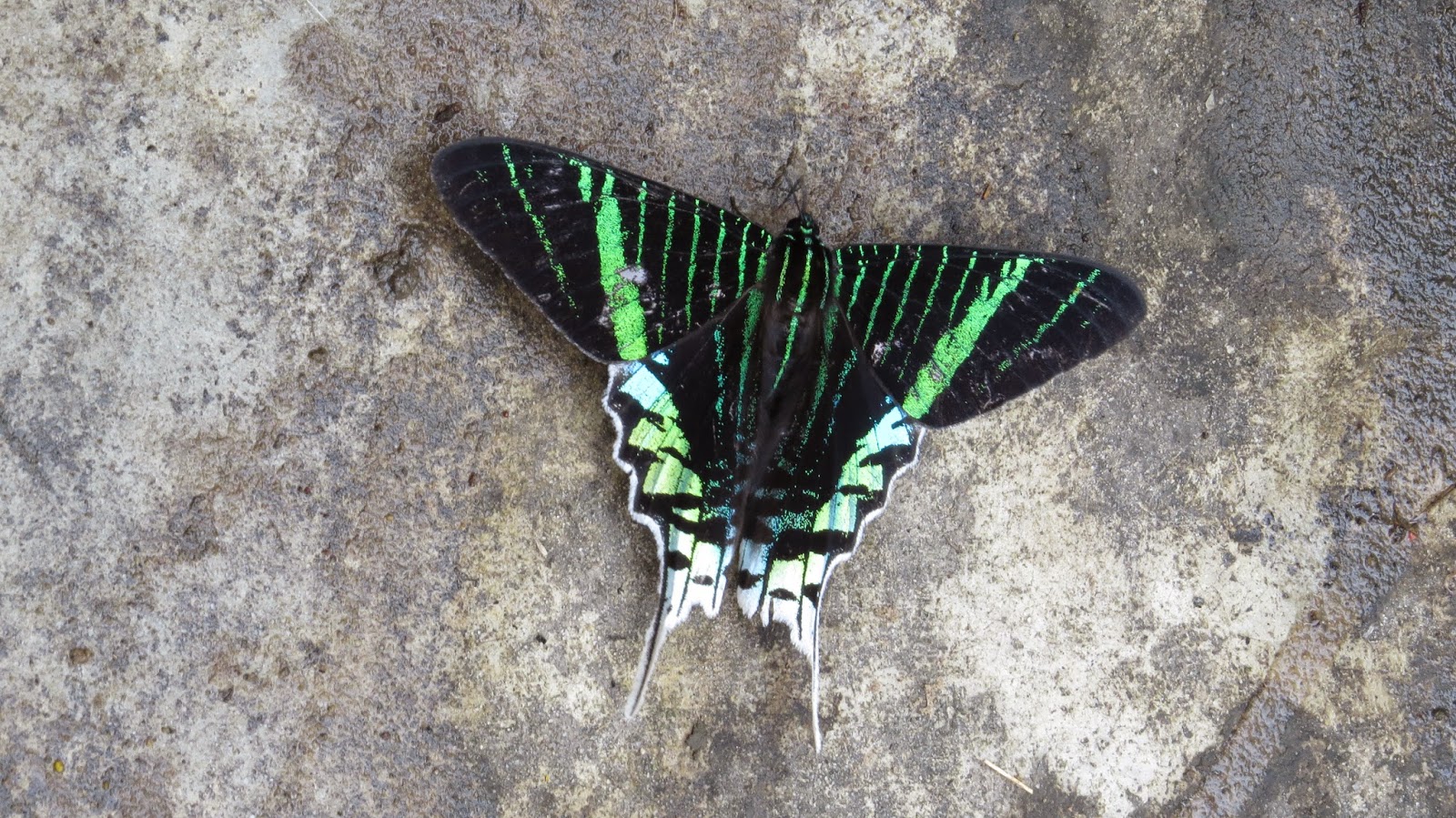 Beautiful butterfly? Think again!
This is actually a day-flying MOTH! Green-banded Urania (Urania leilus).
Spectacular and fairly common throughout their range,
they have a penchant for damp places. 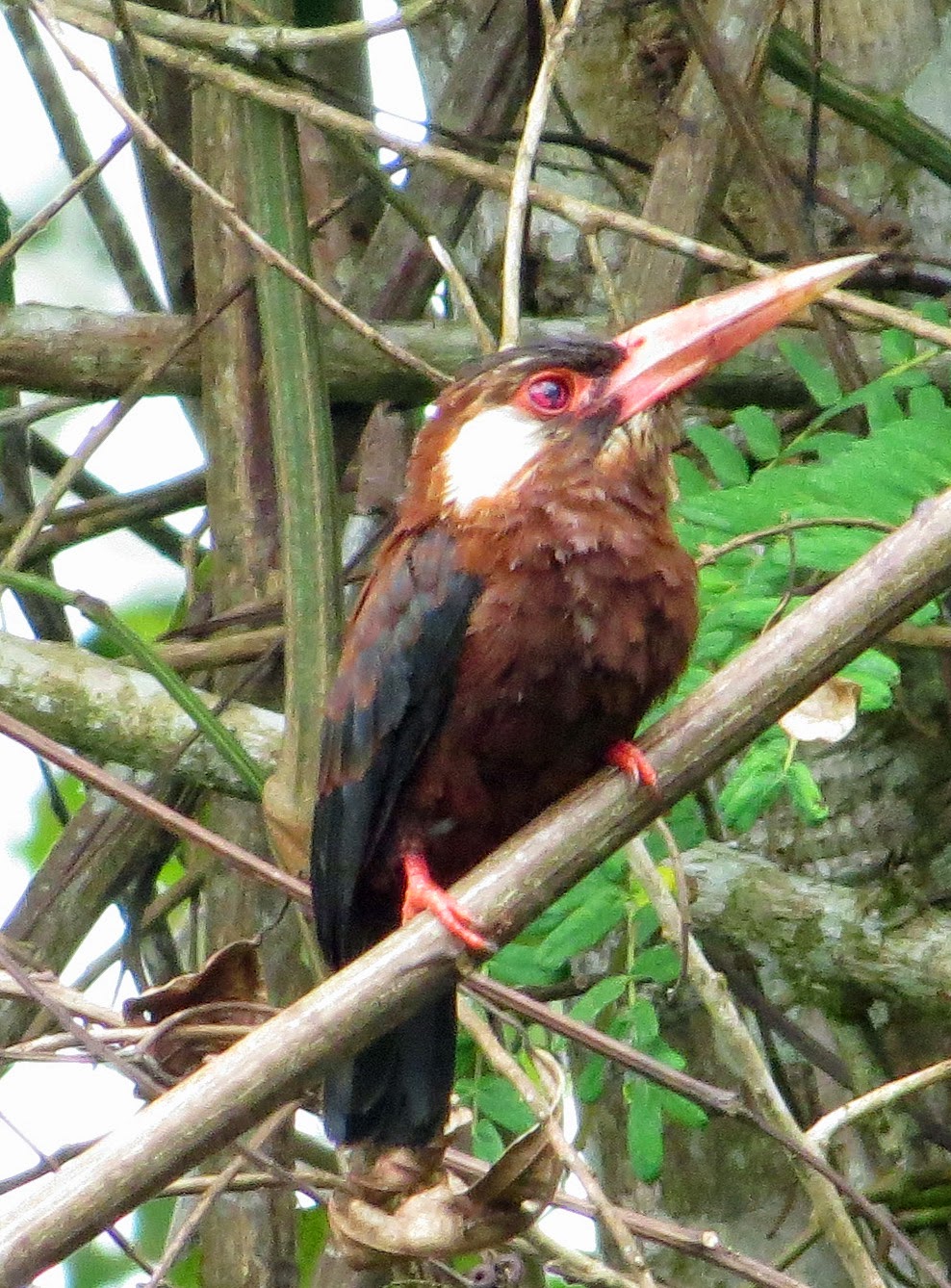 Our first glimpse of White-eared Jacamar (Galbalcyrhynchus leucotis)
had every person with a camera scrambling for a photo! We would discover that this species is abundant along the tributaries of the Amazon, and we'd be treated to point-blank views of this wonderful bird nearly every day.

After our walk, we returned to the Queen Violeta and an afternoon skiff excursion along smaller tributaries of the Amazon. 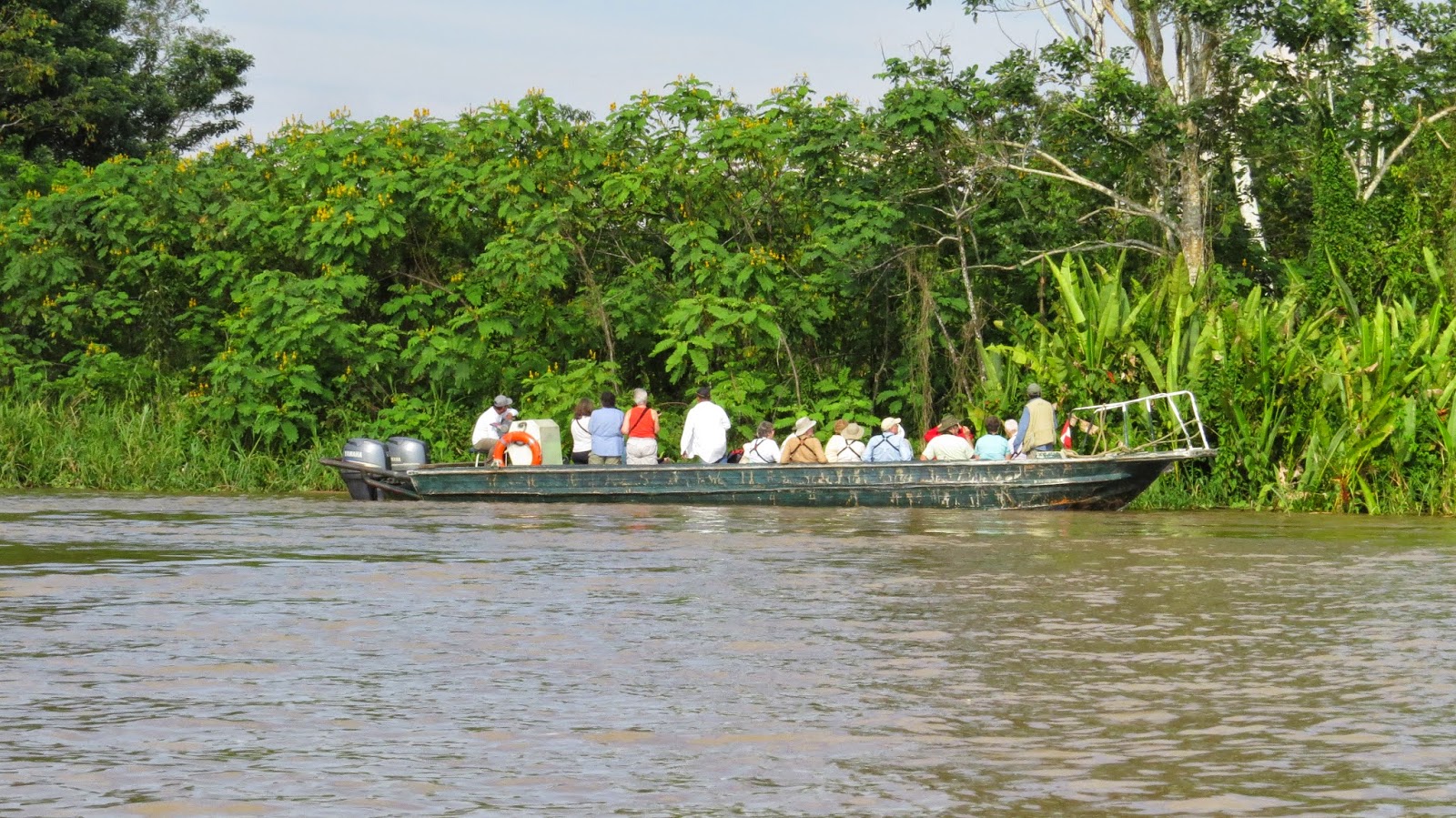 Our visit to Peru was during the rainy season when the Amazon rises and creates seasonally-flooded forests. The forest floor and understory disappear beneath several feet of flowing water, and it was an odd feeling at times to realize that we were drifting along high above what would be the forest floor at other times of year.

The daily excursions in the skiffs allowed us to explore river banks and areas
of flooded forest in a safe and comfortable way, and to get wonderful looks at so many birds and other animals! 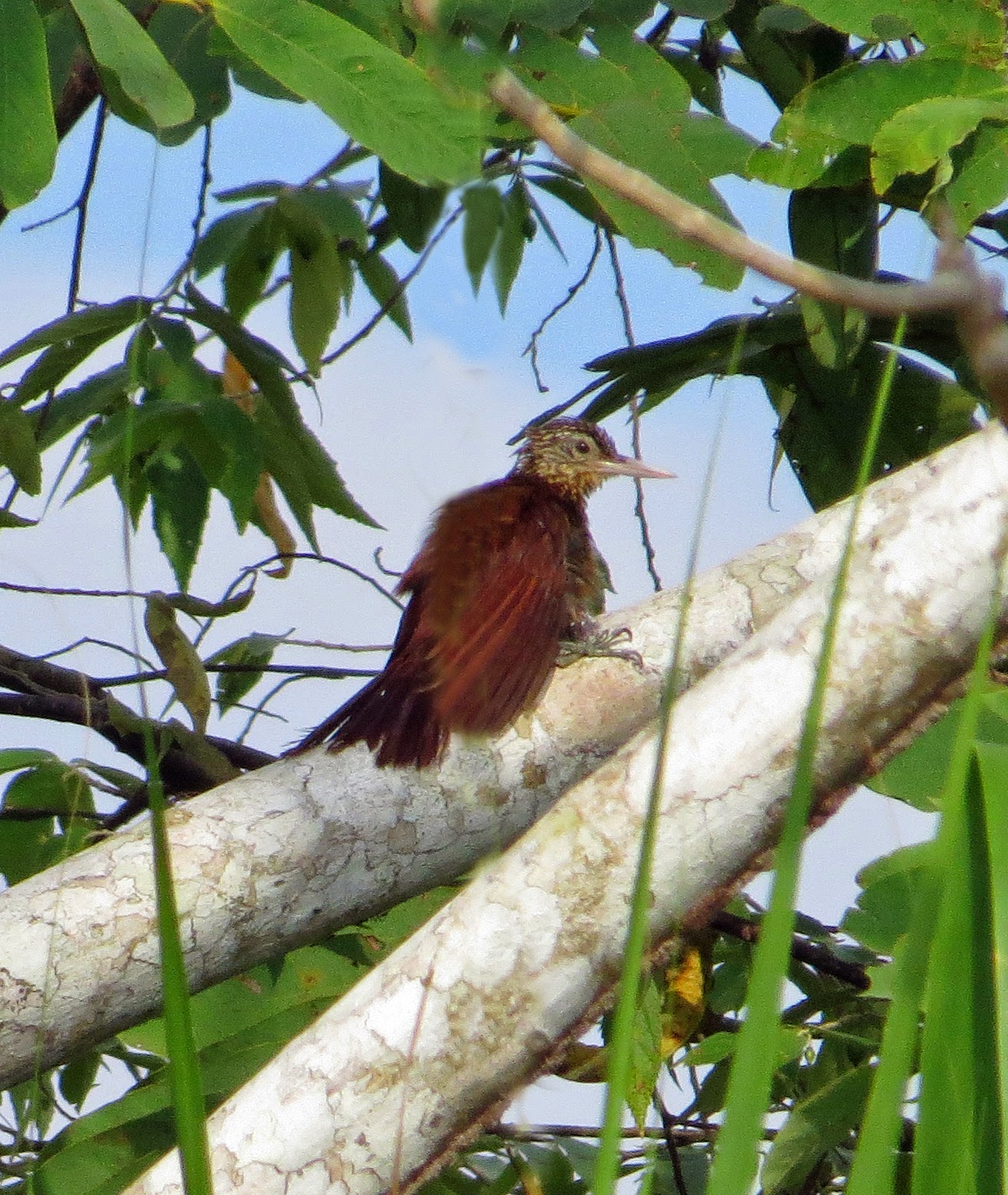 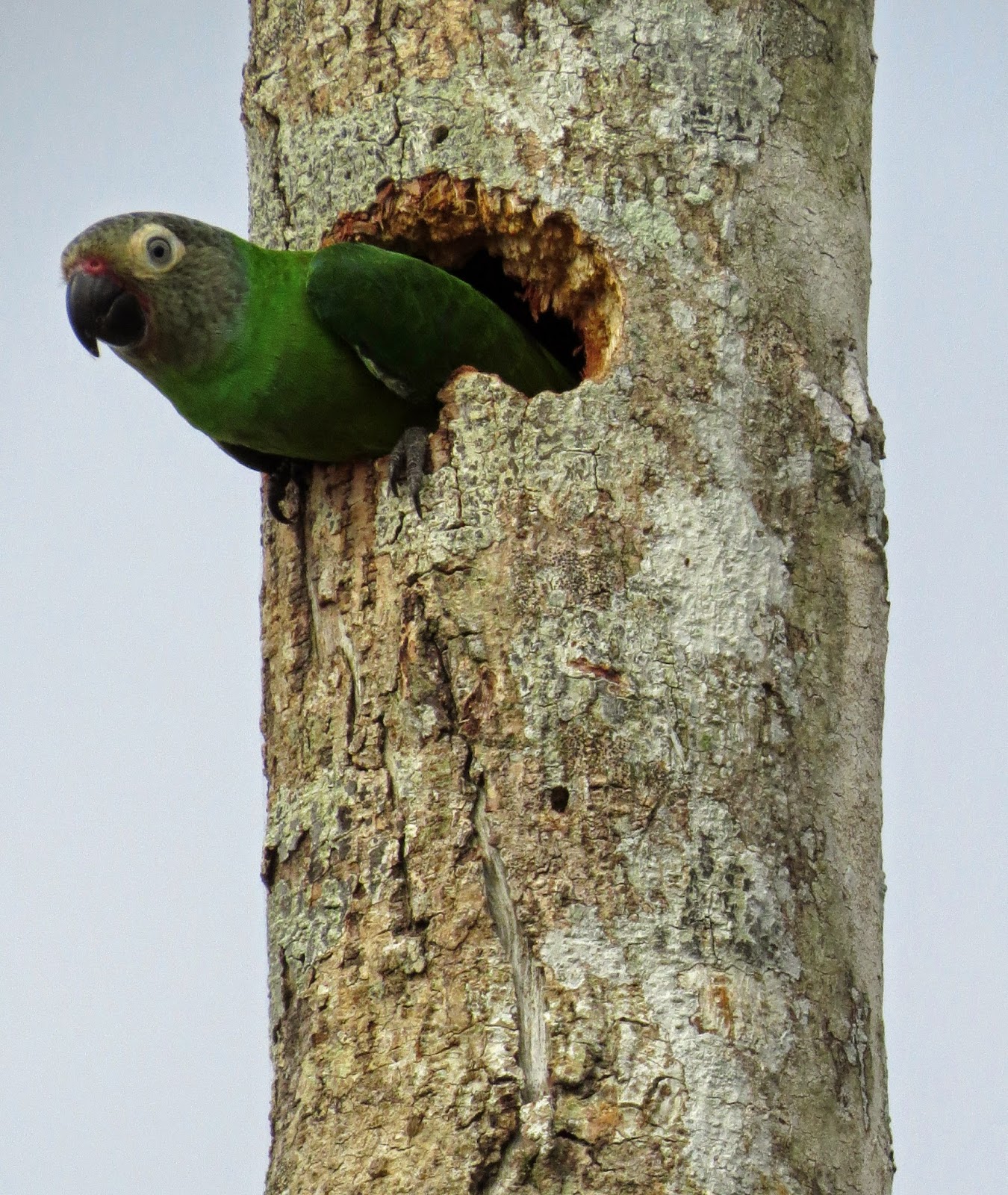 A Dusky-headed Parakeet (Aratinga weddellii)
peering out from the nest cavity as we drifted past. 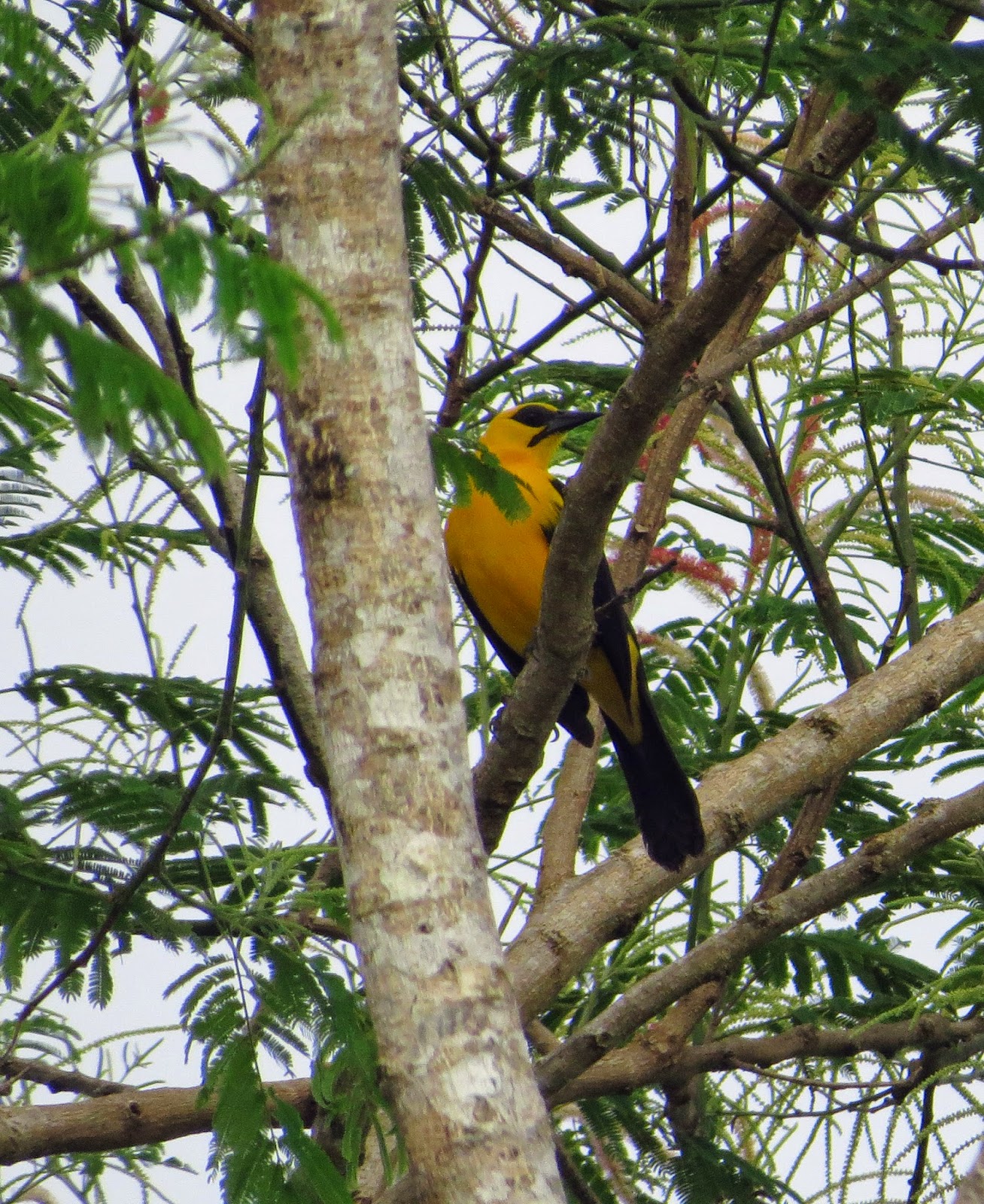 Even in the shade of the canopy, the sizzling saffron
of this Oriole Blackbird (Gymnomystax mexicanus)
was a sight to see!