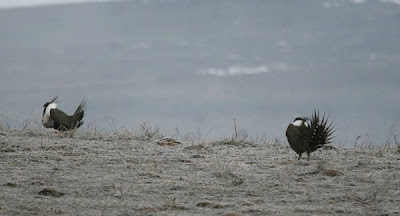 Two male Greater Sage-Grouse in display mode
From back home in Ohio, Kenn writes: When Bruce Ackerman picked us up last Saturday morning at our hotel in downtown Boise, Idaho, it was a good two hours before daylight. But we didn’t complain. We were headed out for a fabulous opportunity to watch Greater Sage-Grouse, one of the truly iconic birds of the American West. Kim already wrote about our encounter with those birds, so this post is just to describe some of the other aspects of the day.

I had birded with Bruce Ackerman before, just a few years ago in Florida, when he was president of the Audubon chapter in St. Petersburg. Now he’s the president of the Golden Eagle Audubon Society (GEAS) in Boise -- he gets around! Also along this morning were Mike Morrison, one of the stellar field birders of GEAS, and David Hazelton, the chapter’s field trip chairman, known to his followers as "All Day Dave." Rounding out the party were Dr. Jay Carlisle, research director of the Idaho Bird Observatory, and Heidi Ware, one of the observatory’s most talented volunteers.

If we had been going out seeking Greater Sage-Grouse two centuries earlier, we wouldn’t have had to travel two hours to a specific spot to find them. The birds were abundant then, and good habitat for them covered a huge area of the West. The total sage-grouse population probably has declined by 90 percent from historic levels. The species isn’t listed as endangered -- such listing would have been inconvenient for pals of the previous administration -- but it clearly merits that designation. The biggest threat to Greater Sage-Grouse and to its sagebrush habitat, though, is a surprising one; they’re threatened by exotic grasses.

At one time, Big Sagebrush (Artemisia tridentata) covered tens of thousands of square miles. The individual "bushes," sometimes standing more than ten feet tall, were spaced out with relatively little ground cover in between them. Lightning strikes would occasionally cause fires in the sagebrush flats, but the fires seldom spread far.

That was before non-native grasses were introduced into the West. Cheatgrass and other grasses, brought in from other continents, have spread throughout the sagebrush country. Areas that once had little or no ground cover now have a dense, continuous buildup of dead grasses. Now when lightning strikes, the fires can rage across miles of habitat. The exotic grasses are adapted to fire and they come back stronger than ever afterwards, but the sagebrush is weakened or even killed by the blazes. So year by year, the classic sagebrush habitat is being replaced gradually by boring flats of non-native grass. The birds that depend on sagebrush, such as Sage Thrasher, Sage Sparrow, and Greater Sage-Grouse, are being squeezed out.

The problem is big enough that it’s hard for individual conservationists to do anything about it. Scientists are working on it, trying to come up with biological controls that can rid the sagebrush habitat of these non-native grasses. The members of the Golden Eagle Audubon Society and the Idaho Bird Observatory are well aware of the situation, but aren’t in a position to attack the problem directly; they do great work by educating the public about the value of birds and wildlife, helping to build up a constituency of people who will care about the survival of sagebrush habitat and its wonderful birds.

For Kim and me, with our involvement with Black Swamp Bird Observatory, it was inspiring to see the great relationship between the Golden Eagle Audubon chapter and the Idaho Bird Observatory. They know how to work together. They also know how to have fun together. Birders in general are fun people, but this Idaho gang was outrageously fun, and we were seeing great birds and laughing like maniacs all morning.

One of the neat things going on here was a friendly year-list competition between Jay, the observatory’s research director, and Heidi, a relative newcomer to birding who is already scary-good in the field. Just two and a half months into the year, their competition had already attracted attention from birders throughout the northwest, and they were running a blog about their progress. Members of Golden Eagle Audubon, and birders from elsewhere in Idaho, were cheering them on.

All in all, Kim and I were impressed at how much was going on in the bird community around Boise, and we were totally grateful to Golden Eagle Audubon for inviting us to come and visit. Check out these links for more info (the URLs should be self-explanatory):