Riding the Edge of Winter

By Kenn Kaufman - December 13, 2009
From Oak Harbor, Ohio, Kenn writes: In fall, most birds migrate south before they would have to. Most migratory birds in North America leave their northern nesting grounds and start southward long before the weather begins to turn bad, long before the food supply begins to dwindle. The birds apparently are keyed to changes in the length of the day, not to local conditions, so they fly away from their summer homes while resources are still abundant.
But there are exceptions. Not surprisingly, one of the exceptions is the surprising Sandhill Crane. Cranes are different from most birds in the nature of their migration anyway: their routes are learned, not instinctive. A baby Indigo Bunting, to cite an example of a typical migrant, is born with an instinct to migrate to Central America in fall without any help. A baby Sandhill Crane is born with an instinct to follow its parents in the fall. Cranes learn their routes and their stopover sites and their wintering sites, and they can change these traditions over time to cope with changing conditions on the ground.
The eastern population of Sandhill Cranes, nesting in the upper Midwest and around the western Great Lakes, has greatly increased in recent decades, with much larger numbers now nesting in states like Wisconsin. These birds traditionally migrated southeastward across a fairly narrow corridor to winter in Florida. But in recent decades, some of these birds have been wintering farther north -- regularly as far north as southeastern Tennessee -- and migrating both later in fall and earlier in spring.
Apparently in fall, many of the Sandhill Cranes don’t migrate until they have to, and this fall they didn’t have to go until December. It was an exceptionally mild season here in the Midwest. In northern Ohio, we had virtually no freezing temperatures before December 1st, and there were still dragonflies and butterflies on the wing in late November. Things changed abruptly in early December with the arrival of a powerful cold front. Temperatures dropped to the single digits, howling winds put the wind chill far below zero, deep snow covered parts of the upper Midwest, and most open waters froze quickly. And after the worst of the wind abated, Sandhill Cranes started to pour through the region, heading southeast.
Traveling by day in flocks, giving wild guttural cries as they pass overhead, Sandhills are likely to be noticed. And during the last few days they have been noticed all over Illinois, Indiana, Ohio, Kentucky, and Tennessee, as their flocks head south to warmer climes. 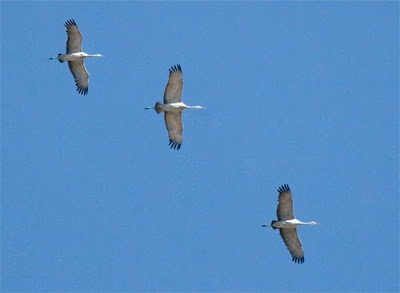 One of the best things about this era of internet communication is that it allows us to track such migrations as they are happening. Twenty years ago, even for a determined person making lots of phone calls, it would have been hard to guess the magnitude of this flight. Now we can look at the state birding listserves and see dozens of reports of flocks, totalling thousands of birds altogether, scattered over a broad swath between Wisconsin and Georgia. And if we live anywhere near the path outlined by the reports we can head outside, eyes and ears to the sky, hoping to catch our own glimpse of this great passage.
cranes migration

By Kenn Kaufman - July 16, 2010
From a state of contemplation, Kenn writes: The American Birding Association (ABA) has been an important part of my life ever since I joined, at the age of 16, back in the 1970s. The ABA was a brand-new organization then, and it served a unique role in connecting the active birders of the U.S. and Canada. Its little bimonthly magazine, Birding, was a treasure trove for me as a teenager, giving me tips on bird-finding and bird identification that I wouldn’t have known about in any other way. When I started traveling, as a hitch-hiking, teenaged birder, the ABA connected me with other enthusiasts and with prime birding hotspots, and helped to put me on a course as a professional naturalist. In subsequent years I was involved with ABA in many ways. I taught bird I.D. workshops at many of their conventions, and later I began giving evening keynote talks at these events; for a while, I had spoken at more ABA conventions than anyone else. I wrote dozens of pieces for Birding magazine, a
Read more
By Kimberly Kaufman - November 17, 2020 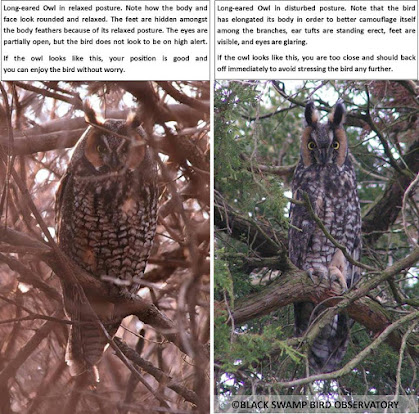