iPhone Users: The App Is Out There

From Oak Harbor, Ohio, Kenn Writes: It’s finally out. We had a last-minute conference call yesterday afternoon -- involving Ithaca, Charlottesville, Philadelphia, Monterey, Singapore, and me in Oak Harbor -- making sure everything was set up, and then Todd told Apple to release it to the App Store. Within a couple of hours the app was available online, and reviews of it were appearing here and there on the internet.
If you’re just joining us -- if you have been out paying attention to birds, for example, rather than the latest in tech toys -- "app" is short for "application," but the millions of people downloading these applications for use on their iPhones just call them "apps." An iPhone -- well, that’s like a supercharged combination of a cell phone and an iPod, and it can do everything from place calls to navigate cross-country, to check the stock market, to send e-mail, to store photos, to play games, to play music (of course, just like an iPod). And an iPod is -- well, it’s a good demonstration of how fast the world has been changing recently. 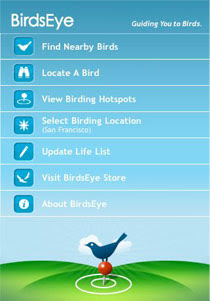 But anyway, with the new app for iPhone, you can instantly find out what birds are being seen in your area, how recently, and exactly where, and you can go straight to the spot and see them for yourself.
The new app is called "BirdsEye," and it was developed by three certifiable geniuses named Todd Koym, Pete Myers, and Carl Coryell-Martin. Pete happens to be an old friend of mine (and a top-notch bird expert), which is why I got invited to take part in the project. Todd and Carl are relatively new to birding. But Todd had gotten the bug for birding in a big way, and he wanted to find new birds for his life list. He knew that he could report bird sightings to the big Project eBird, an online database (run by the Cornell Lab of Ornithology and National Audubon Society) that collects millions of sightings monthly. But Todd wondered: could he turn that around, extract recent sightings from eBird in a well-organized way, so that the information could become a powerful tool for bird-finding? 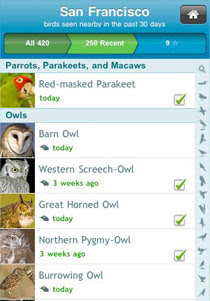 As it turned out, the people at eBird were all in favor of the idea, and they worked with us to develop the necessary software to pull reports out of eBird in real time and straight into the BirdsEye app. My role in the project was to write short species accounts for 847 species of birds -- not how to identify them, but tips on how to find them, in terms of their behavior and where they would be in the habitat. I also had some input on the overall design, with the occasional conference call involving Todd in Charlotteville, Virginia, Carl in Singapore, and Pete bouncing all over the map. It was a great privilege to be in on these discussions, to hear how these brilliant tech-savvy guys discussed what was possible in programming the application. I think it turned out great, and while I can’t take any credit for that, I’m happy to tell my friends all about it.
It’s not a field guide -- that is, not a guide to identifying birds, it’s a guide to finding them, and it runs on an iPhone or on an iPod Touch. I’ve got it on an iPod Touch in front of me right now as I type this. When I turn it on and open up 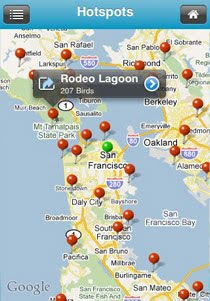 BirdsEye, the opening screen gives me a number of options. Say I go into "Find Nearby Birds" -- it calculates my location (built-in GPS, you know) and takes me to a list of birds found near Port Clinton, Ohio -- I can look either at the 308 species reported to eBird from this immediate area so far, or just the 80 species reported recently. (Remember, this is winter; it would be a lot more species in late spring.) Say I go to the recent birds, and note that one of them is Lesser Black-backed Gull, and let’s say I want to go look at that species. I tap on the species name, and it takes me to a map, with pointers that indicate that the Lesser Black-back has been found recently at Huron Harbor, Findlay Reservoir, New London Reservoir, and several points farther east. Say I don’t know anything about the birding at New London Reservoir, so I tap on the name of that site, and it takes me to a list of birds seen there recently, including Northern Harrier. Let’s just say I don’t know anything about Northern Harrier -- I can follow the link from that and see a number of sites where harriers have been found recently, or I can go to three photos of the species (beautiful photographs from VIREO, the scientific collection of bird images at the Academy of Natural Sciences of Philadelphia) and a recording of its voice (from the Macaulay Library of Natural Sounds at the Cornell Lab of Ornithology). There's also a concise paragraph on the behavior of the harrier so I’ll know where to look for it once I get to the right spot. 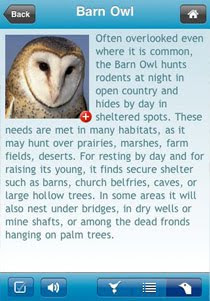 Oh, yeah: that concise paragraph, I wrote that. I wrote such accounts for 847 species of birds, a total of more than 60,000 words, and I hope they’ll make the app more useful and more enjoyable for anyone who uses BirdsEye to find more birds.

For a link to the official BirdsEye web page, which has links to the App Store where you can get the app if you want it, click here.
For a press release about the app, which went out to thousands of media outlets and other contacts earlier today, and is also reproduced on the eBird website, click here.
Matt Mendenhall from Birder's World magazine interviewed me about the app; Matt is pretty tech-savvy himself and he was one of the beta testers for BirdsEye. You can read the full text of the interview here.
And if any of our readers try out BirdsEye, or have any questions about it, I hope that we'll hear from you!
Posted by Kenn Kaufman at 8:16 PM