By Kimberly Kaufman - June 19, 2021
Kenn Writes: Periodical cicadas: Brood X, which appeared this year, is one of the most widespread of the 17-year cicada emergences. But as with the other broods, it's also quite localized: the insects don't travel far, so unless you're very close to one of the mass emergence sites, you won't see any at all. 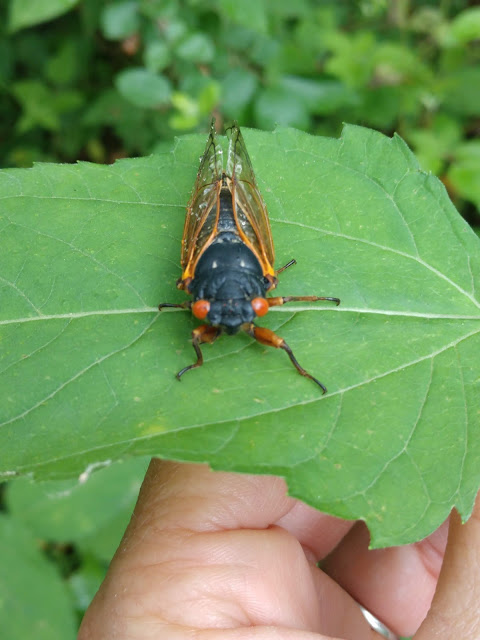 Brood X emerged at many sites in Ohio this year, but none in our immediate area in the northwest part of the state. So today, Kimberly and I made a special trip north to Washtenaw County, Michigan, which apparently is the northernmost outpost of Brood X. (A couple of other broods do occur slightly farther north in Wisconsin and New York, but of course they're not out this year.) We spent time at the Matthaei Botanical Garden and Marshall Nature Area just east of Ann Arbor and saw good diversity of birds, plants, butterflies, etc., as well as having a wonderful experience with the insects that were the main target of our expedition.
Kimberly plucked this obliging individual off of a low shrub and it promptly sang for us.*Note the din in the background: a chorus of thousands of individuals.

I can't imagine how anyone could fail to be fascinated by periodical cicadas. The adults we saw yesterday had hatched out of eggs laid in 2004, and they had spent the last 17 years tunneling around underground before emerging, en masse, within the last few weeks. The adults are harmless and slow-moving and they don't even make any attempt to defend themselves when you pick them up. Why? Because they have evolved to appear abruptly, in numbers so huge that predators can't possibly take them all. We saw robins, kingbirds, woodpeckers, catbirds, and others eating cicadas, and we even watched a large dragonfly catch one in midair, but even with all this feasting by predators it was obvious they couldn't put a dent in the sheer abundance. We looked at various trees where the female cicadas already had laid large numbers of eggs, laying the groundwork for the next emergence of Brood X in 2038. 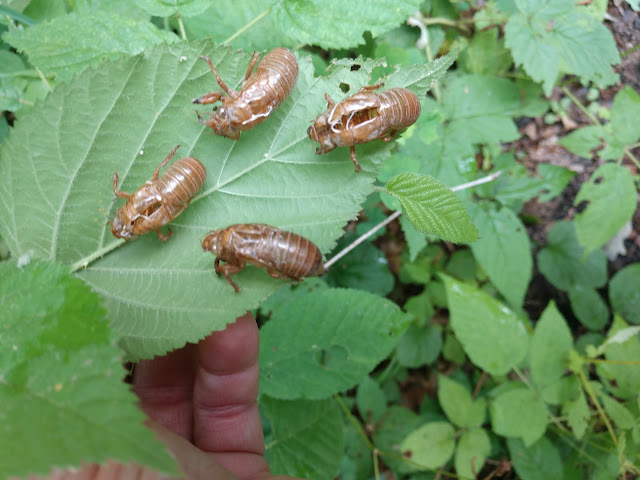 Hundreds of molted exoskeletons festooned the underside of low shrubs
This would all be extraordinary enough if periodical cicadas were just one species. But current understanding is that there are three species of 17-year cicadas and four species of 13-year cicadas (one recognized as recently as the year 2000), with multiple species often appearing together. The members of Brood X emerging in Michigan are mostly (or all?) of the species Magicicada septendecim, sometimes called the Pharaoh Cicada, like the one in this photograph. 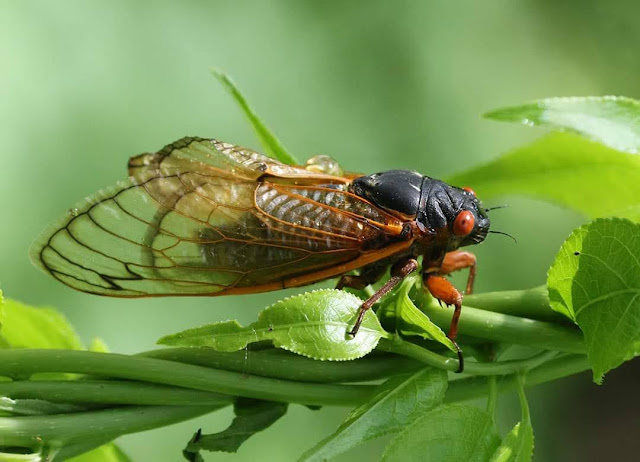 In the future I think we'll see more ecotourism events develop around this phenomenon. I should think that naturalists from other parts of the country (or from other countries) would be interested in something like full-day trips out in the field with an interpretive naturalist to learn details about these absolutely amazing insects, as well as looking at other aspects of natural history. For Kimberly and me, yesterday was phenomenally rewarding. We had just been too danged busy to go pursue the distant cicadas; but then our friends Kevin and Lisa were passing through the area, and after meeting them for breakfast, we decided to just ditch our work for the day and go off chasing bugs. I'm glad we did.