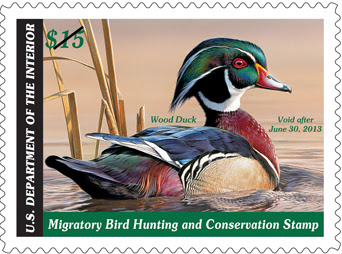 From Oak Harbor, Ohio, Kenn writes: A big event is coming to northwest Ohio at the end of September, and local birders are excited about it.

That in itself is not unusual. Northwest Ohio is no stranger to birding events. One of the largest and most important bird festivals on the continent, The Biggest Week In American Birding, makes a huge impact here every May. Another notable festival, the Midwest Birding Symposium, is held here in fall every other year. But the event in late September isn’t a birding festival. It’s the contest to choose the artwork for next year’s Migratory Bird Hunting and Conservation Stamp—better known as the Duck Stamp.

The Duck Stamp program dates to 1934, a time when waterfowl populations in North America were in serious trouble because of habitat loss. The federal wildlife agencies needed a way to raise money to purchase or restore wetland habitats. By producing the stamp and requiring hunters to buy it, they were able to immediately start raising funds to protect habitat for nesting, wintering, and migratory stopovers for waterfowl. The program has been a spectacular success, having raised many millions of dollars and having led to the protection of over 5.3 million acres of quality habitat.
At first, artists supplied each year’s stamp design by invitation. Starting in 1949, the stamp design has been chosen by a contest each year. The winning artist is not paid for the artwork, but the prestige of winning can provide a huge boost to any wildlife artist’s career, so hundreds enter every year. The contest is administered by the U.S. Fish & Wildlife Service, and judged by five independent experts appointed by the Secretary of the Interior. Some talented artists have won the contest more than once, but being a judge is a coveted, once-in-a-lifetime honor.

Who buys the stamp? Waterfowl hunters are required to purchase one—and I think most would do so willingly, because they believe in supporting the resource. Many stamp collectors also buy these little works of art every year, adding them to their collections. And many birders also buy the stamp. I’ve been buying it for many years now. But why?

Why do birders buy the stamp? Because we like ducks too, and we recognize that the stamp supports many kinds of wildlife. Wetlands for ducks are also ideal habitats for rails, gallinules, bitterns, grebes, terns, various marsh-loving wrens and sparrows, and many other birds.
But proceeds from stamp sales don’t just buy duck habitat. This money goes into the Migratory Bird Conservation Fund (MBCF), and then it is used to add to the National Wildlife Refuge System, through either purchase or lease of land. Consider these popular birding refuges, and the percentage of their total area paid for with MBCF money:

Birders who travel will know that all these refuges support many kinds of birds besides ducks. Santa Ana NWR, for example, does have a couple of small lakes that host a few hundred ducks at some seasons, but most of the refuge is subtropical woodland, home to Green Jays, Hook-billed Kites, and other specialty birds of the border region. Ottawa NWR, near my home in Ohio, does host large numbers of waterfowl, but it’s also prime habitat for Bald Eagles, and its woodlands swarm with warblers and other migratory songbirds in spring. Birders and wildlife-watchers get far more use out of these refuges than hunters do.
As a serious birder, knowing that Duck Stamp sales have provided habitats like these, I have plenty of reason to buy the stamp every year. But I’ve had some additional involvement with the stamp. In October 2004, I flew to Washington to serve as one of the judges for the contest to choose the 2005-2006 Federal Duck Stamp design.

My fellow judges were John Tomke, president of Ducks Unlimited; Dr. Tom Hutchens, immediate past chairman of Delta Waterfowl Foundation; Rich Smoker, a renowned carver of waterfowl; and Michael Jaffe, a leading philatelist and expert on conservation stamps. Of course, I’m not a hunter or a carver or a stamp expert. I was there to represent the birders.

That could have been a recipe for tension. In some parts of North America there is a deep divide, or at least a sense of wariness, between birders and hunters.  But my relations with hunters always have been cordial, because I’ve always recognized how much they contribute to conservation. As a kid, reading Roger Tory Peterson’s Birds Over America, I was impressed at how the great birdman gave credit to sportsmen’s groups for protecting duck habitat. He wrote about the Duck Stamp, about the National Wildlife Refuges, about private organizations like Ducks Unlimited. He wrote that there was a huge difference between the market gunners of former times, who wiped out wildlife for sheer profit, and modern sportsmen, who worked to maintain healthy populations of wildlife so that hunting could continue.

So even birders who don’t hunt recognize the conservation work done by hunters’ groups. In speaking to bird clubs and bird festivals, I have made this point many times over the last 25 years: “I’m concerned about bird conservation. I worry about what will happen to populations of shorebirds. I worry about what will happen to populations of hawks, woodpeckers, warblers. But I never spend a minute worrying about ducks, because the duck hunters are taking care of them. If duck hunting ever fades away, we will have to scramble like crazy to find a way to protect that whole group of birds and their habitats."

Most birders understand that, so I rarely get any flack for saying it. And having said this to birding groups hundreds of times, it was no sweat to say it to the hunters on the judging panel. We got along fine for our two days of discussions and deliberations, we chose a beautiful painting by Mark Anderson for the 2005-2006 stamp, and I was never made to feel that I, as a birder, was out of place.


So if birders are being included as judges in the contest, does that mean that the birding community at large is recognized for its support of the Duck Stamp program?  Well—sort of. There are steps in that direction. Federal wildlife agencies are paying more attention to birders than they used to. For the last few years I’ve been on an advisory panel on “Birding on the National Wildlife Refuges,” and some of our recommendations have gained some traction. But a high percentage of employees at the U.S. Fish & Wildlife Service still come from a hunting and fishing background. Thinking about birders and nongame birds may be a stretch for some of them.

Whatever the reason, birders sometimes feel oddly left out by the policies of some National Wildlife Refuges. And some birders use that as an excuse for not buying the Duck Stamp. “Why should I buy it,” they say, “when the hunters will get all the credit for supporting the program?” I have argued that the Duck Stamp is a powerful force for bird conservation, and that we shouldn’t care who gets the credit. But at some level, I can see their point. If birders aren’t recognized for supporting the stamp and the refuges, won’t it be harder for us to influence the refuges to help the nongame birds?

For the birders who raise that objection, here’s a suggestion: support the program and make your voice heard by buying the Duck Stamp from a birding organization. There are more and more opportunities to do this. The Georgia Ornithological Society and Wisconsin Society for Ornithology are among several state bird clubs that sell the stamp. Here in northwest Ohio, the Black Swamp Bird Observatory (BSBO) started selling the Duck Stamp several years ago. It’s important to note that selling the stamp is not like selling regular merchandise: there is no profit. If BSBO sells a book for 15 dollars, they probably will make 6 or 7 dollars on it. When BSBO sells a Duck Stamp for 15 dollars, the profit is zero. There is no markup. The money all goes straight back to the program. 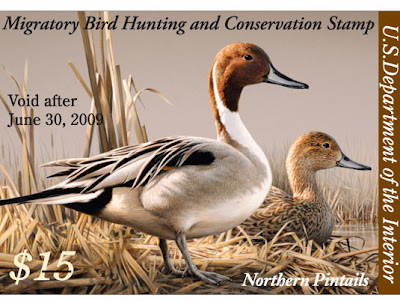 Northwest Ohio just might be the best place to build better relations between the communities of birders and hunters. After all, the birders who live here realize that some of our very best birding sites, places like Magee Marsh Wildlife Area and Ottawa National Wildlife Refuge, were saved from development by private duck-hunting clubs. The duck clubs kept the habitat in good shape until the time that the land could be sold or donated to the government wildlife agencies. Even today, some of the most productive bird habitat is managed by private duck clubs. So all the birders here know that we owe a debt of gratitude to the hunters.

And the birders here already support the Duck Stamp. Look at the Black Swamp Bird Observatory, which not only sells the stamp but actively promotes it. On their website, in their nature shop, at their huge Biggest Week In American Birding festival, BSBO urges the birders to buy the stamp and protect habitat.

There are other connections, too. At the end of the month, when the judging for next year’s Duck Stamp takes place in northwest Ohio, the contest will be held at the Lodge at Maumee Bay State Park. This is the same lodge that serves as headquarters for The Biggest Week In American Birding each spring. We birders are very familiar with this place, and many of us will come to the lodge to witness the Duck Stamp contest. We’ll look at the art, pick our own favorites, argue about relative merits of the different pieces, and await the decision of the judges. And when the stamp is issued next June, we’ll be among the first in line to buy it.

The duck hunters recognize this principle. Ducks Unlimited, one of the most effective conservation groups in the world, recently started a campaign to urge their members to “Double Up For Ducks,” to buy two Duck Stamps per year instead of one. The hunters don’t have to buy a second stamp—but many of them do.

By the same token, the people at the Black Swamp Bird Observatory don’t have to sell the Duck Stamp—but they do. And the birders don’t have to buy the stamp—but we do.

Do I wish that birders got more recognition for supporting the program? Well, sure. It’s nice to get credit. And we'll keep working on that. But in the meantime, we need to save habitat, and this is one of the easiest, most direct ways to do it. If you like birds and you haven't yet bought your Duck Stamp for this year, why not click this link and buy the stamp right now?

Information on the 2013 Contest