From Homebase in Oak Harbor (but still dreaming of Panama), Kimberly Writes: It's been quite some time since we last posted to our poor neglected blog, and we've had some pretty amazing adventures since then. For instance, we just returned from a sensational trip to Panama with our friends Jim and Cindy Beckman and their birding tour company Cheepers! Birding on a Budget. Traveling with Jim and Cindy is like an extra insurance policy for having a great time on a trip. Their attention to detail, their fun loving spirit, and the fact that they travel along with their customers on every trip ensures a positively wonderful experience! To add to the supreme quality of this trip, our local guide in Panama was Carlos Bethancourt. We'd birded with Carlos in Texas a few years ago so we knew how great he was. We'd heard many testimonials of his skills as a guide in Panama, and now that we've birded with him on his home turf, we can testify that every great thing we heard is totally true!

We knew we were in for an amazing trip, but it exceeded our expectations on every level.

During the trip, one of the places we stayed was the elegant Canopy Lodge. Turns out, our room was the same room that Brad Pitt and Angelina Jolie stayed in during their visit to the Lodge a few years ago! 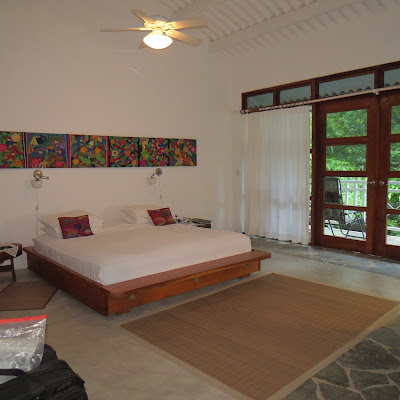 Pretty cool, for sure, but as amazing as the Lodge was, the centerpiece of our trip was the time we spent here...

Originally designed as a radar tower and used by the United States Air Force from 1965 through 1995, the Tower took on a rather unique new life in 1997 when Raul Arias de Para had the courage and the vision to purchase this stack of metal and turn it into one of the most extraordinary bird lodges in the world.
And in between the glorious arrival and departure of the sun are experiences with wildlife
that leave you feeling blessed and breathless.
And then there are the sloths.
In the area near the Tower, they come incredibly close.
We had close looks at a few Three-toed Sloths that live in the Cecropias right next to the Tower. I think on some level we all want to see wild animals up close and personal, on our own terms, of course. But on our first morning walk along the road to the Tower, we came close to a little sloth under very sad circumstances. 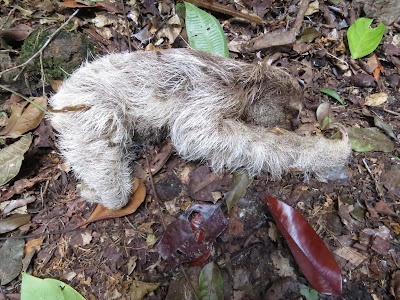 It appeared that this baby sloth had fallen from the tree during the recent storms that had battered the area. When we first spotted it, we thought it was already gone. Upon closer inspection, we were delighted to find that it was still alive. But it was clear that it was gravely wounded and we knew we had to try and get it some help. 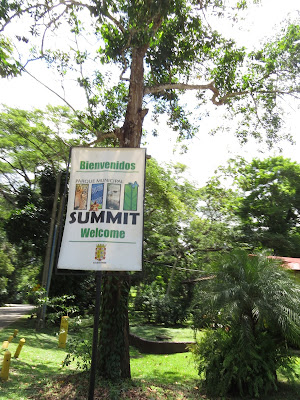 Fortunately, Summit Park, a wildlife rescue facility, is only a short drive away. Carlos has some training in handling injured animals and he knew what to do. So we picked it up and gently swaddled it in a birder's bandanna and rushed the little sloth to Summit Park. While it was depressing to find it in such dire condition, it was amazing to see this animal up close.  I mentioned earlier that sloths are often home to other organisms, and out little sloth was no exception. There were tiny moths crawling around its fur, and even a tinge of greenish algae on its chin. 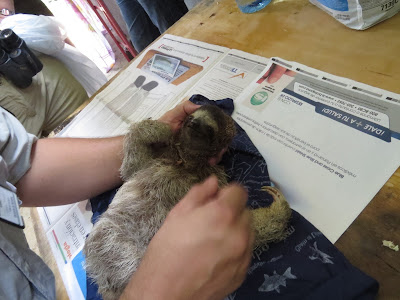 Nestor Correa, Director of Summit Park, assessed its condition. There were life-threatening injuries, but we'd at least given it a fighting chance. We had plans to visit the park a few days later for the official tour, and we were anxious to learn the fate of  our little sloth.  The news wasn't good, and we were all saddened to learn that it had slipped away the night we brought it in.  In a very sweet gesture, the park staff arranged for us to meet some of their more fortunate patients in an effort to make us feel a little better about the loss of our little sloth.

The Park employees the assistance of several volunteer "Wildlife Mothers" who care for the Park's orphaned animals. Turns out, Nestor's wife is one of these angels, and she brought two of "her" babies to meet us during our visit. 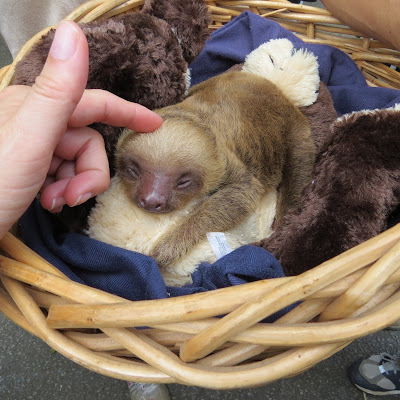 This sweet baby is a Three-toed Sloth.  You can tell by the lighter color of its face. It was found clinging to a fallen tree and the mother couldn't be located, so they had to bring it in to be raised by a human mama. 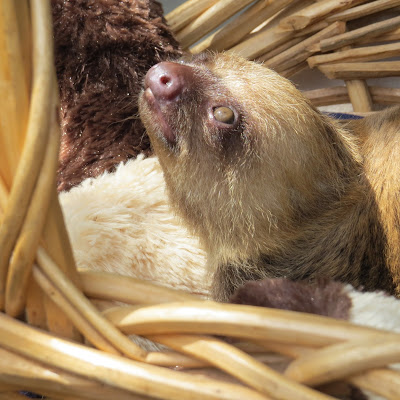 Look at the way it watches its "Mama."
It doesn't seem to mind that she has more than three toes. 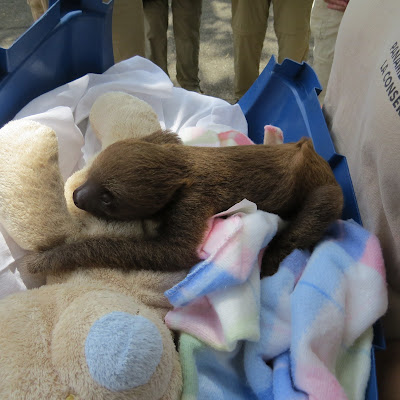 And here is a tiny, ridiculously adorable Two-toed Sloth, with its darker face. 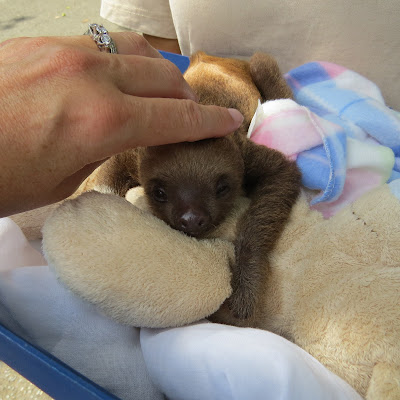 This baby is perfectly healthy, but it was abandoned because it has one white foot, something the staff at Summit Park has seen before. It doesn't seem like a big deal to us, but to a mama sloth, this is apparently an unacceptable flaw that causes them to leave their babies behind.


Sloths, toucans, and howler monkeys...
As a kid, I never dreamed I'd see these exotic creatures in real life. To say that I hadn't traveled much before I met Kenn is a real understatement, and I am deeply grateful to him for giving me the courage to travel and to experience the world and the miracles of nature that our planet plays host to.

Our sincere gratitude to Jim and Cindy, Raul and his lovely wife Denise, and Carlos and the entire Canopy Tower Family for making this trip possible!

More on our Panama adventure coming soon. (pssst...there's a Harpy Eagle involved!)  :-)
Posted by Kimberly Kaufman at 9:22 AM