The Big Year: and hopefully beyond 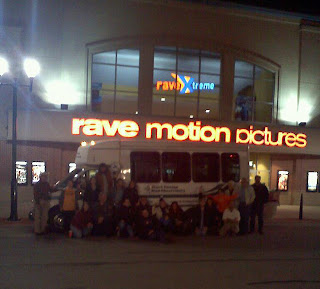 From homebase in Oak Harbor, Kimberly writes: Last night, Black Swamp Bird Observatory loaded a bunch of birders into our awesome Bird Bus and went to see the movie The Big Year.  I was excited to go to the movies with Kenn and a bunch of friends no matter how good or bad the movie turned out to be. To be honest, I was more than a little concerned that Hollywood would simply adopt the model perpetuated by the media for decades and cast us in the same stereonerdical role.

Steve Martin's character, "Stu Preissler," is a powerful, wealthy, executive who is obsessed with birding. His colleagues all bow to his executive prowess and on more than one occasion, they actually beg him to rescue them in challenging business negotiations. He's a hero. But here's the beauty. He's also a really nice guy.  He loves his family, and while on occasion (with some gentle admonishment from his loving and supportive wife) he skips a few family moments to see great birds (sounds familiar, doesn't it?), he's still a great guy.

To me, it was a spot on portrayal of the "friendly umbrella" that birders around the world always seem to be under. With a few exceptions, birders are just a nice bunch of people, and I thought the movie did a wonderful job of portraying that. Sure, the "Kenny Bostic" character played by Owen Wilson made some rather edgy choices. But even he had moments of sincerity. ﻿
And the Greg Miller character portrayed by Jack Black? Well, of course he was my favorite. I'm an intelligent woman, but I do love some crazy, slapstick humor, and Black happens to be one of my faves. I suppose the fact that we know and adore Greg Miller introduces at least some bias. But, Greg'll do that to ya. He's a pretty great guy. Black's character in the movie was that of the lovable underdog, and he even looks a bit like Greg, which is fun!
I'm going to be careful not to spoil it for you, so if you haven't seen it, GO! See the film, represent birders, drive the box office ratings up, and help send a message to the world that we are a mass consumer market and that what we want really matters. Maybe then, they'll start to hear our cries for conservation-minded products like certified bird friendly coffee.


Moving forward...
A question I've been hearing about The Big Year is, "Sure, birders will enjoy it. But will the general public, the non birders, get it?  I don't think they have to totally "get" the whole idea of birding from the film. I think seeing three popular Hollywood actors obsessed with birding (and not looking like total dorks doing it) will be enough to pique the interest of some people. I think the real question is - how will we know? Will they become members of the American Birding Association? Will they buy Swarovski Optiks? Will they subscribe to WildBird magazine? All of which made appearances in the film.


At some point it would be good for "the powers that be" in the birding community to put their heads together and work on a collective marketing campaign. Make an effort to carry the movie's momentum beyond the initial surge of its release. National Audubon reportedly invested six figures in marketing the film. But what now?  I believe there's an opportunity here, but we have to be proactive about it. I hope we will.