Petal to the Medal / Bird on a Wire

From Home base in Oak Harbor, Ohio, Kim writes: After a very long day, this is what I arrived home to last night: 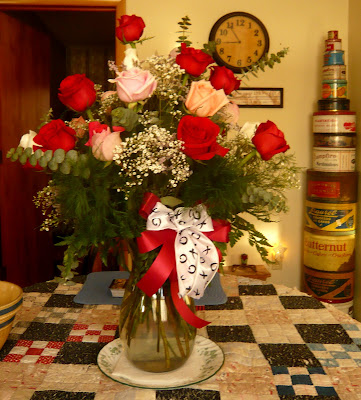 Aren't they lovely?! If there was a medal for world's most beautiful flower arrangement, these flowers would take solid gold. The best part is that they came on a random day: Not my birthday. Not our anniversary. Not Valentine's Day. Just another day in the life of being married to a very sweet and thoughtful man.

Okay, I know this is supposed to be a birding blog. So, I'll give you a bird fix.

Our friend and great birder, Carl Edwards, is a lifelong Floridian and he lives near the Loxahatchee National Wildlife Refuge, so he joined us for Kenn's keynote talk at the refuge last Saturday. The talk was sold out--standing room only--and they actually blocked the door and had a refuge volunteer keeping people from squeezing in. Well, Carl spent a little too much time out birding and arrived a few minutes late, so he had to ninja his way past the door police to get in. (Nothing like a good bird ninja!). 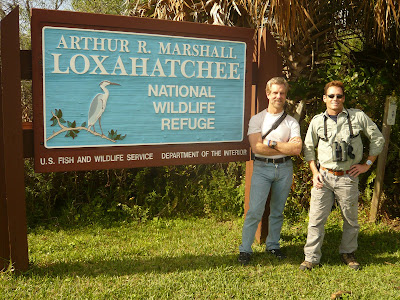 After Kenn's talk, Carl really wanted to take us to a few of his favorite birding spots, but Kenn and I needed to start the long drive back to Ohio. On our way out to the parking lot I was crying the blues to Carl about how I had really hoped to see a Snail Kite on this trip. He consoled me with a "maybe next time," and we said our goodbyes.

Kenn and I stopped for gas, tossed a coin about which route to take out of the gas station parking lot, and off we went. We hadn't driven a 1/4 of a mile when I noticed this dude alongside the road, standing outside his vehicle, flailing his arms and jumping up and down. At first I was thinking - News Headline: Florida Residents Reveal The True Meaning Behind the "SNAP" in Cold Snap! And then I realized that it was CARL! SO then I was thinking,"Well, too much birding and lack of sleep had finally taken its toll on Carl," but as we zipped past at 70 mph, I noticed he was actually pointing at something on a wire above this narrow canal. Oh man, could it be...

It was! A young male Snail Kite was walking the high wire, searching for snails from this primo vantage point above the canal. 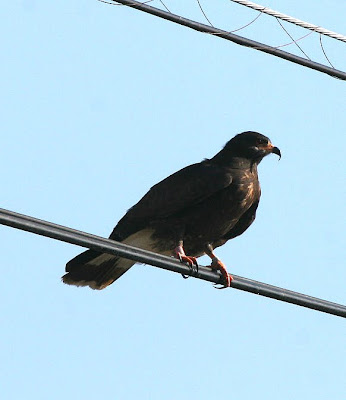 After some pretty crazy freeway maneuvers to get back to the spot, we spent several glorious minutes appreciating this bird at a supremely close range.

We stood spell bound for several minutes, and then he ripped off the wire and the wind grabbed him and blew him right over my head. 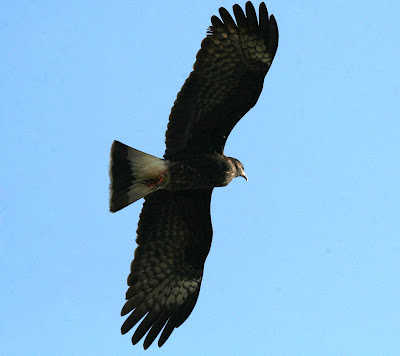 KaPow! What a magnificent bird.
Kenn pointed out that the flight style of Snail Kites is much more relaxed than most raptors. After all, their prey are snails; no need get all fired up the chase. 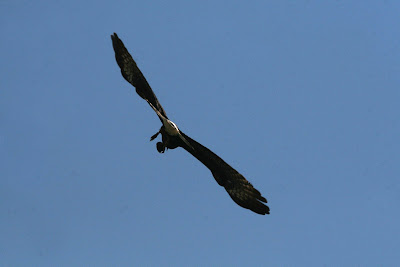 He sashayed down into the canal and when he came back up he had a prize.
You can see it in his talons. I hope my friend Dave will give me props for this "Birds From Behind" photo! 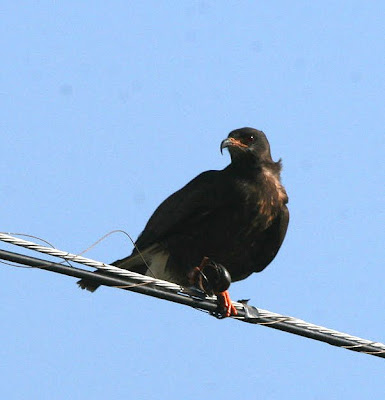 He returned to his spot on the wire with his catch. 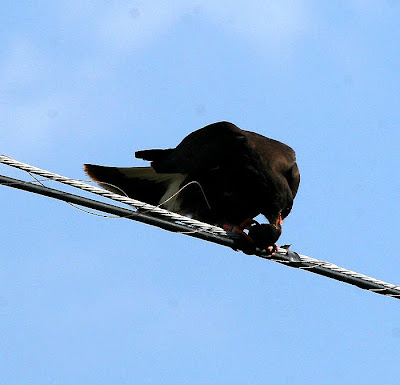 Eventually he settled in to chow his snail.
It was amazing to see the highly adapted bill and talons at work, getting to the heart of the snail matter.

Did anyone notice that the bird was banded? Kenn and I are working on blowing up the image to the point of reading the band. Unfortunately the light was really harsh, so the pictures aren't exactly razor sharp, but we're trying.

Thanks again, Carl! I appreciate the lengths that you will go to help me see a particular bird.

Happy Birding, ya'll!
Posted by Kimberly Kaufman at 9:00 AM