That Time of Year

From Oak Harbor, Ohio, Kenn writes: For several years now I've been very interested in the whole subject of molt. This is the process wherein birds develop a new coat of feathers, generally by dropping a few feathers at a time, with new feathers growing in their place. Birders may not notice the molt unless they look closely, but it's a universal phenomenon among birds. Especially among smaller birds, it's generally true that a healthy wild bird will replace every one of its feathers at least once a year. Birders may not notice, though, unless the new feathers are strikingly different in color from the old ones. 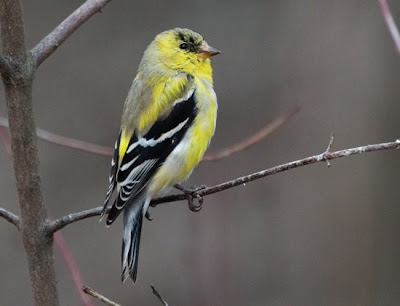 The timing of the molt for most species is quite predictable. Right now, for example, here in northern Ohio, the American Goldfinches are starting their spring ("prealternate") molt. It's most noticeable on the adult males, who molt from very dull to very bright colors. This bird was outside the windows at the Black Swamp Bird Observatory yesterday, the last day of March. The occurrence of molt is one of the reasons why we have to look at the calendar when we're considering the identification of an unknown bird: it may be some familiar species in the process of going through a change.
People sometimes ask us why this bird is called the "American" Goldfinch, when it also occurs in Canada and locally in Mexico. Why not just "Common" Goldfinch, or "Yellow" Goldfinch, or something like that? Well, there's a good reason. Remember, I said that the bird shown above was just starting to molt. When it finishes the process of molting into its full summer plumage, usually around July 4, it will look like this: 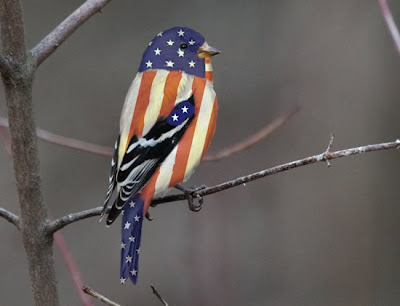 As I said, we have to look at the calendar when we're considering an unknown bird; for some reason, April 1 produces more than its share of weird reports.

All seriousness aside (as the saying goes), the molt really IS going on right now, and it's affecting the appearance of many birds. The American Goldfinch is a great example to watch because it may come to feeders right outside your window and because the change of color on the males is so striking. But a high percentage of our small songbirds are going through some kind of molt of their head and body feathers at this season, and with a close study, you may be able to see the contrast between the crisp new feathers and the slightly older, worn, faded feathers. It's a part of the survival strategy of the birds and it's something we can witness for ourselves with just a little extra attention. 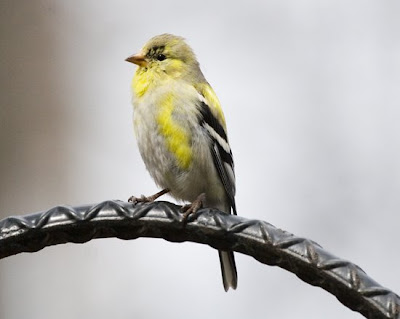