By Kenn Kaufman - January 05, 2009
Kenn wrote this back in December: (Today, January 5, we're supposed to be leading a group of birders to the Otamendi Nature Reserve north of Buenos Aires, Argentina. It's unlikely that we'll have a chance to post anything, so this "random bird" is set to post in our absence.)
That’s one of the great things about being a bird blogger. Who else gets to title a post "Purple-bibbed Whitetip?" 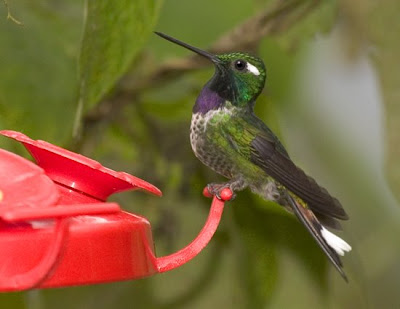 This small hummingbird (technically Urosticte benjamini) occurs only on the west slope of the Andes in Colombia and Ecuador, mostly in the understory of dense forest in the subtropical zone. It had been considered "rare to uncommon and perhaps local" and "not often seen" as recently as 2001. That was when the outstanding two-volume "The Birds of Ecuador," by Bob Ridgely and Paul Greenfield, was published. But since then, a number of ecotourism lodges in Ecuador have put up hummingbird feeders, and suddenly this rare-and-not-often-seen hummer has become a lot easier to see. The establishment of feeders in many tropical areas has not changed the actual distribution of hummingbirds, but it has certainly altered our understanding of where they live.
I had seen this bird’s only close relative, the Rufous-vented Whitetip, in Peru several years ago, but I’d never encountered the Purple-bibbed until February 2006, when Kim and I got to watch (and photograph) this species at leisure at the Tandayapa Bird Lodge, near Mindo, Ecuador. The purple bibs of the males were visible only in certain lights, but the odd white tips to their central tail feathers were very conspicuous.
bird feeding hummingbirds Random Birds