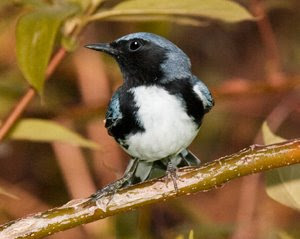 From Oak Harbor, Ohio, Kenn writes: It’s an awfully small bird to have such a big name. The Black-throated Blue Warbler is maybe five inches long from the tip of its bill to the end of its tail. It weighs less than an ounce, even when it’s fattened up for its biggest journey of the year, which is happening right now. This warbler is on its way south, and by this date in late September, most of its kind have already headed to more southerly latitudes.
Birders and non-birders could be separated on the basis of their experience with warblers. Everyone has seen birds like geese, and everyone notices pelicans or eagles if they’re arround. But warblers are different: they mostly go unnoticed by most people, even while many birders regard them as favorites. North America has more than 50 kinds of warblers – small, active, colorful birds that flit among the leaves, feeding on insects. Most of them spend the winter in the tropics, coming north in a rush in spring, while birders rush out to look for them. Their southward migration in fall is not so celebrated, partly because many of them change into a duller fall plumage, making them harder to tell apart. But the male Black-throated Blue Warbler has a black throat and a blue back all year long.
Every species of warbler has its own distinct range. This male Black-throated Blue, which paused out behind the Black Swamp Bird Observatory in northern Ohio today, probably had come from somewhere in southern Canada, and it was almost certainly headed for wintering grounds somewhere in the Caribbean. Once when I was in Jamaica in winter I was amazed at how many Black-throated Blue Warblers I saw in the woods. These little migratory birds represent a shared treasure, to be enjoyed by citizens of several nations on their seasonal travels.
Posted by Kenn Kaufman at 5:12 PM