From the Clipper Adventurer in the middle of the Drake Passage, Kenn and Kim write: Yesterday evening, the Chinstrap Penguins and Gentoo Penguins bid us farewell as we left Barrientos Island in the South Shetlands and headed north for the crossing back to Ushuaia. The Drake Passage -- the stretch of water between the northern tip of Antarctica and the southernmost point of South America -- is renowned for its potentially rough seas. Kenn has observed on past trips that it can produce huge waves, but that it can also be flat calm at times (sometimes even earning the term "Drake Lake"). Today was somewhere between these extremes. For much of the morning we couldn’t stand on any of the open decks without holding on to something, making it hard to scan out among the tossing whitecaps and driving spray. Even by late afternoon the ship was still rolling and unpredictably lurching at times. But throughout the day, the ship was being followed by a variety of birds, including at least a dozen White-chinned Petrels. 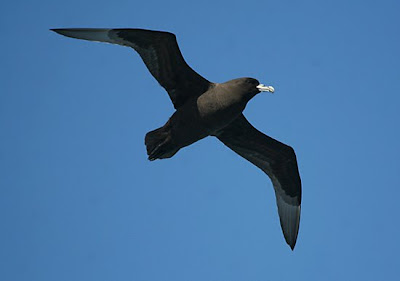 We took advantage of the opportunity to watch these petrels. Big and stocky, mostly deep chocolate in color, they circled and soared effortlessly on the whipping winds, sometimes hanging in mid-air high over the stern, sometimes swooping in great arcs around the ship. The White-chinned Petrel is widespread in southern seas, nesting on the Falklands and South Georgia Island as well as on several islands in the southern Indian Ocean and islands south of New Zealand. So it’s easy to see this bird if you travel by ship at southern latitudes. It’s not so easy to see the white chin for which it’s named: the bird has only a small patch of white feathers below the big pale bill. But with today’s views we were able to see the white chin of the White-chin repeatedly. 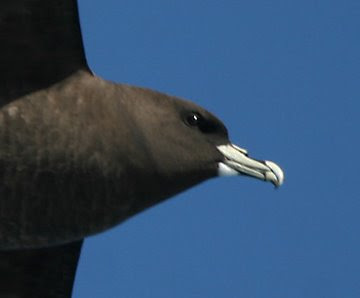 The White-chinned Petrel really does have a white chin, but in a close-up view, the structure of its bill is a more interesting feature

We'll be out in the Drake Passage all day tomorrow as well, but by Sunday midday we'll be back on land in southernmost Argentina ... and after a couple more days in Argentina, we should be home in Ohio by Thursday the 29th. We'll report on our whole trip, a few details at a time, after we get home. It will take a while to digest this experience, but we'll share as much of it as we can.
Posted by Kenn Kaufman at 8:04 PM