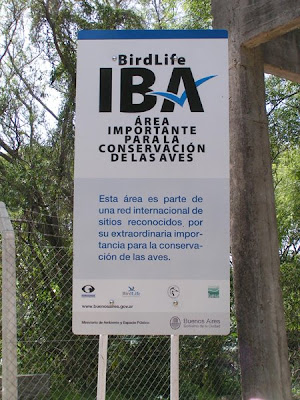 From Buenos Aires, Argentina, Kim and Kenn write: Our friend Delores Cole (web guru for Black Swamp Bird Observatory and Ohio Young Birders Club) came in this morning, and walked out with us for another round at the Costanera Sur Nature Reserve. As indicated by the sign above, the reserve is internationally recognized as an Important Bird Area. 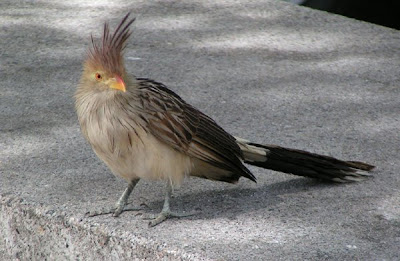 A major Important Bird of this Area is the outlandish Guira Cuckoo. It looks weird enough standing still, but check out this video that Kim took of the bird calling and showing off (with authentic Latino music in the background):

A bird that we found foraging in the high traffic area along the edge of the reserve was the totally gorgeous Red-crested Cardinal. But, unlike most good-looking humans I've encountered, these doggone birds did NOT want to have their picture taken. I chased them up and down the sidewalk, generating ZERO good photos, but lots of laughs from Kenn & Delores, and the locals who delighted in watching the bird come in right next to me...until I raised the camera.
Eventually I got bored with the game and started people watching. That's how I spotted and photographed the much more cooperative Red-crested human, which looked remarkably like the bird that refused to have its picture taken! Here she is doing some foraging of her own: 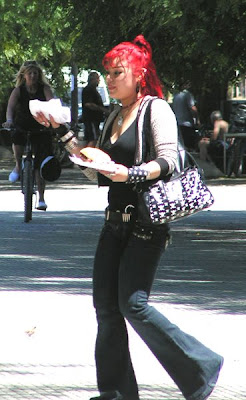 Of course, as soon as I gave up and settled for a photo of a look-alike, the real thing came along and posed for me. Check out this stunner: 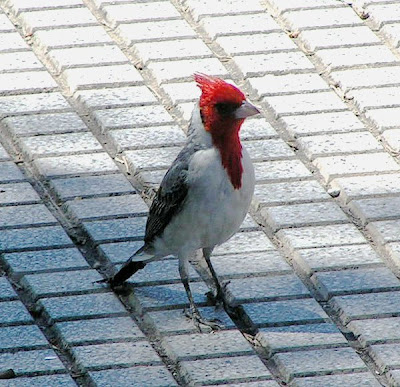 The Beautiful (and fussy!) Red-crested Cardinal 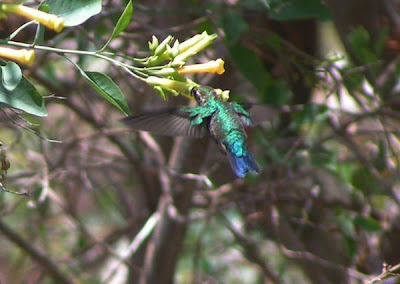 The most common hummingbird here was the Glittering-bellied Emerald (another name invented by museum ornithologists, trying to come up with something distinctive about yet another species of Chlorostilbon that looks pretty much like all the others). We often saw it feeding at the flowers of tree-tobacco (Nicotiana glauca). This is a great hummingbird plant in the southern USA and Mexico as well, but here in South America it's more likely to be a local native.

The trails through the park are filled with local people who come here to exercise. They certainly seem to enjoy the sun; Kenn was practically the only man there who was wearing a shirt. Some apparently come to exercise their bodies. Others appeared to be exorcizing any variety of demons.
Kenn had an interesting conversation with one of the locals who seemed to be doing a bit of both. A nice fella, who knew a bit about the birds, he, um, well, he didn't have much on in terms of clothing. But he sure knew a lot about Rufous Horneros! When he saw our binoculars, he stopped running, came straight over and pointed excitedly to a large nest above our heads. Kenn was too nice to tell him that we knew exactly what it was, and that we'd been standing there admiring it for several minutes. We're always thrilled when the locals seem to be aware and appreciative of their bird neighbors, and we didn't want to dampen his enthusiasm.
The conversation Kenn had with the guy was totally in Spanish, so I was pretty much out of the loop. After he jogged off, Kenn explained the conversation, referring to the guy as "The Naked Naturalist" which had me giggling like an idiot the rest of the day.
In case you don't remember the Rufous Hornero.....Here it is again. 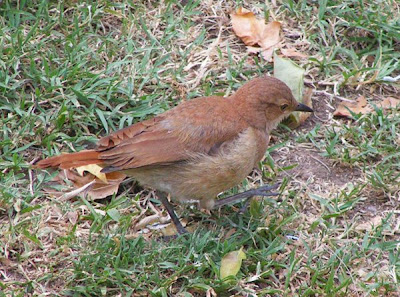 And, here's its way cool nest. 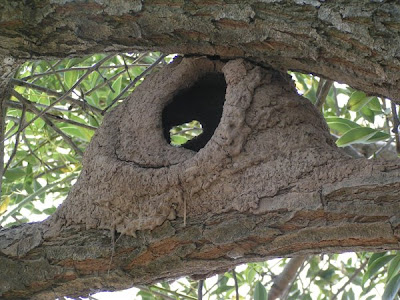 See, it looks like an old oven, doesn't it?! 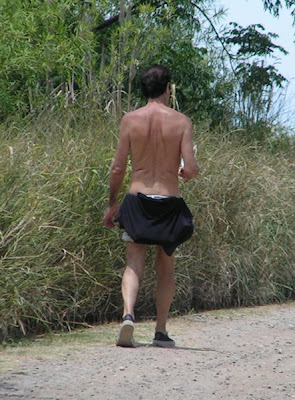 The Naked Naturalist moves on after giving us the lo-down on the
Rufous Hornero and its nest.
Posted by Kimberly Kaufman at 6:43 PM