Antarctica: Outline of the trip

From home base in Ohio, Kenn writes: We traveled to the Antarctic on board the Clipper Adventurer from January 7 to 25, 2009, on a birding and wildlife expedition sponsored by Victor Emanuel Nature Tours. Before and after the voyage we were in Argentina, starting in the capital city of Buenos Aires and joining the ship in the southern outpost city of Ushuaia. The map below will help to put these points in a world perspective. 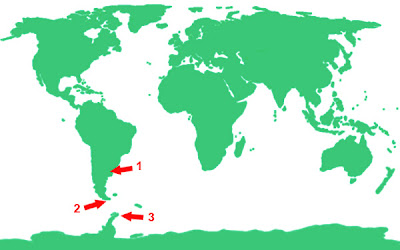 The vast majority of expedition cruises to Antarctica go from South America to the Antarctic Peninsula, and the map shows why. South America extends much farther south than Africa or Australia, and the Antarctic Peninsula is the northernmost point of the white continent, so the crossing is feasible for many kinds of ships. There are also some expedition cruises that go south from New Zealand and take in the subantarctic islands of that country, and a few cruises that go south through the bird-rich waters of South Africa to the continent's edge, and we would like to try those routes eventually. But so far, all five of my trips have originated in South America.

Most world maps (like the one above) show Antarctica as an ill-defined mass along the lower edge, so it's hard for most people to get an idea of the continent's size. Antarctica is huge -- near the size of Australia and Europe combined. It is roughly centered on the South Pole, and the interior of the continent is the coldest region on earth. We confess that, as naturalists, we're not very interested in visiting the South Pole; nothing lives there except a few dedicated scientists. Remarkably, the South Polar Skua has occurred there as a stray, having flown many hundreds of miles across lifeless ice and rock, but we'd rather watch birds like this out at the Antarctic coastline where they belong. 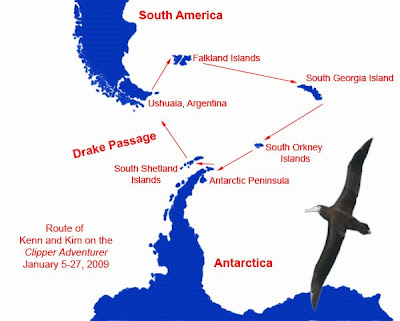 The majority of expedition cruises from Ushuia go straight across the Drake Passage to the Antarctic Peninsula and back. But our trip was focused on birds and wildlife, so we took the longer route northeast to the Falkland Islands, farther east to remote South Georgia Island, then southwest to the Antarctic Peninsula and back north across the Drake Passage. On the voyage we spent eight full days at sea (enjoying fabulous seabirds, whales, and dolphins), and during the other ten days we made landings at no fewer than 18 sites. This was Kim's first trip to the region and I can say without hesitation that it was my best trip ever. In subsequent posts we'll be describing the experiences of the voyage in detail.
Posted by Kenn Kaufman at 11:47 AM