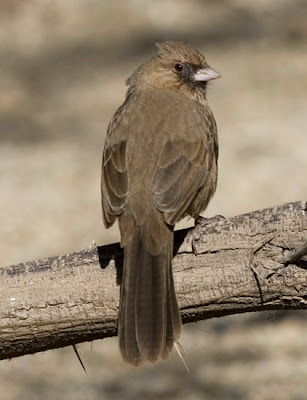 Kenn wrote this back in December: (Today, January 22, we're scheduled to be finishing our exploration of the Antarctic Peninsula and starting to head toward the legendary rough waters of the Drake Passage. Internet access is unlikely, so we pre-set this post to appear in our absence.)
If you’re more than about 300 miles away from Phoenix, Arizona, I can pretty much guarantee that you won’t be seeing Abert’s Towhee today. And neither will we. This is a bird with a very limited range, found only in thickets along lowland streams in the American southwest. Some southwestern birds become more common as you head south into Mexico, but not Abert’s Towhee; it barely crosses the border into the northern edge of Mexico. Most of its range is in Arizona and a small area of southeastern California, with tiny toeholds in New Mexico, Nevada, and Utah.
In most places this bird lurks inside dense thickets, scratching among the leaf-litter with both feet in the manner of other towhees, and it’s usually hard to see. You’re more likely to hear its voice, a series of sharp ringing notes (and that's just as well; it sounds better than it looks). In some places, though, the bird is increasing and spreading into new habitats. Within the last three decades or so, this has become a common suburban bird in parts of Phoenix and Yuma, Arizona. It has also expanded its range into new areas, such as along Sonoita Creek in southern Arizona, where we know from careful past study that it hadn’t been present in earlier years.
Abert’s Towhee shows up on some "watchlists" of birds of conservation concern, presumably because its total range looks small on the map. In my opinion, this is misguided: we should reserve such designations for birds that are actually vulnerable or declining. Abert’s Towhee has been expanding its range and adapting to new habitats, so it’s doing very well. If conservation groups get into a mindset of padding the lists of "threatened" or "near-threatened" birds, after a while the whole exercise starts to take on a sense of the-sky-is-falling absurdity.
Posted by Kenn Kaufman at 8:00 AM