My eyes have seen the glory....

Kim writes: Some of you may be wondering why--outside of a few random photos and thoughts--I haven't really attempted to describe the Antarctic experience. In fact, I've been wondering about it myself. Certainly time is a factor. I'd be lying if I said it wasn't. In the Kaufman Universe, life moves at warp speed. But, time (or lack thereof) is not the real problem. It's the trip itself.

Unlike Kenn, I was not born with the "travelin' bone." I grew up on a farm in rural Ohio and throughout most of my childhood no one I knew ever went anywhere, to speak of. If someone actually went someplace that required a SUITCASE it was a really big deal! Funny story---When I graduated from High School one of my Aunts got me a set of luggage. Of course I accepted the gift graciously, but inside I was thinking, "You gotta be freakin kidding me with the luggage, right?" (Sorry Aunt Connie! You're the best.)
Now, you might think that marrying someone like Kenn, I must have had some idea that travel would be part of my life. But to be honest, it wasn't something I really even thought about. I mean, yeah, I knew that Kenn had worked for many years as a bird tour leader--traveling all over the world. But, by the time we met, he had moved on from tour leading to work on his field guide series. I guess on some level I assumed that far-flung travel was a thing of the past. Kenn is an amazing person and he fills my life with so much adventure that I would be perfectly content if we never left home. But, traveling with him is like the ultimate bonus. And now--that girl who laughed at the idea of owning a suitcase--has been to some pretty astounding places.
Antarctica....
Now, be honest...If you were asked to make a list of the top 10 places in the world that you wanted to travel to, would your list include Antarctica? For me, the thought of going someplace like that was just too far outside the scope of my imagination. For good reason. It was a totally mind-blowing, life-altering experience. Nothing could have prepared me for it. No books. No pictures. No videos on U-Tube. Nothing does it justice.
But now I have been there. And I have struggled for weeks to find a way to tell you what it was like. I will try. But I must tell you that I will fail. Until your eyes have sparkled with tears at the sight of an iceberg peppered with penguins. Until a flock of Cape Petrels dances for you. Until the bow of your ship has moved in close enough to kiss the edge of a glacier. Until your senses have been exercised to their ultimate limits by a colony of Adelie Penguins. Until your heart has practically thumped its way out of your chest as you stared straight into the eyes of a Leopard Seal. ----- Until you've walked where ice is magnificent enough be a place on the map.....It is truly hard to imagine.
But we will do our best....
See the black lumps in this photo? EVERY BLACK LUMP IS AN ADELIE PENGUIN! 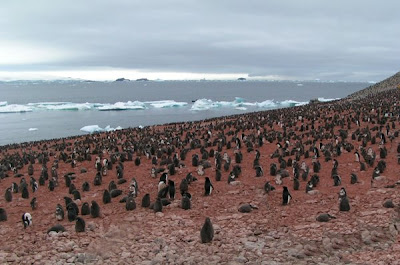 Now, imagine that you are standing a few feet from the edge of this astounding scene. Waves crash and stir bits of ice against the rocky shoreline like rhythmic music...your ears ring with the sound of it. Adelies are before you in numbers that are nearly incomprehensible...your nose wrinkles with the smell of it. The rough and tumble rocks of the island--and the occasional Adelie at your feet--make you aware of every footstep. And your soul weeps with the joy of it.
Posted by Kimberly Kaufman at 3:49 AM