From Home Base, Kenn and Kim write: We should state up front that the Falkland Islands (or, as the Argentinians would call them, Las Islas Malvinas) are best classified as part of the subantarctic region, not part of Antarctica itself. The islands lie east of the southern tip of South America, and we actually had to travel somewhat north from Ushuaia, Argentina, to get there. After being out at sea all day on January 8, we had the Falklands in sight by very early in the morning on January 9, and we made our first landing of the trip at Saunders Island, in the northwest part of the archipelago, early this morning.
Ferried ashore in the Zodiacs, the sturdy inflatable boats that are a mainstay of adventure cruising worldwide, we got an eyeful and earful of wildlife on Saunders Island. This fabulous first stop presented a series of spectacles that kept us gasping with delight for the entire morning. Magellanic Penguins (about which we wrote in our post of Feb. 6) were in the water and on the beach, to be upstaged by hundreds of Gentoo Penguins and dozens of King Penguins. We’ll write more about those soon. But the star penguins of the day were the bold, weird little Rockhopper Penguins. We knew that Saunders would be our main encounter with this species, so we all spent a lot of time watching them. 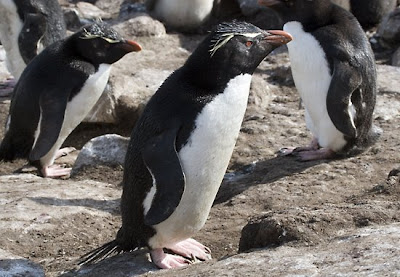 Rockhoppers DO hop on rocks. Their nesting colony on Saunders was high on a hillside, and the birds had to hop and waddle and scramble up a very steep rocky slope to bring food to their young. Fortunately, they seem to be pretty tough birds, able to make this arduous journey over and over during the nesting season. But the effort could explain their grouchy expressions. 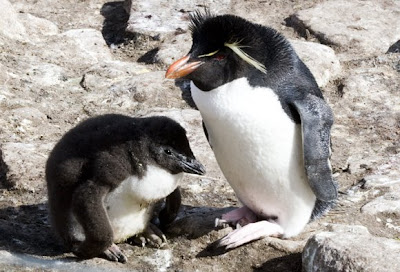 Of course we shouldn’t assign human expressions to animals, but with the Rockhoppers it was almost impossible to resist the temptation. For example, we couldn't help wondering what this adult might be telling its fuzzy half-grown chick. 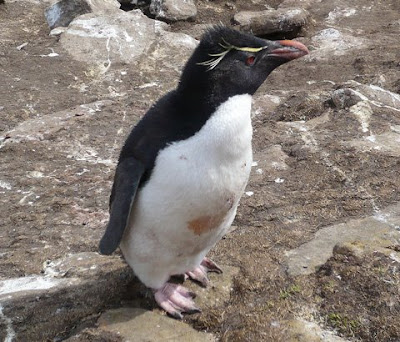 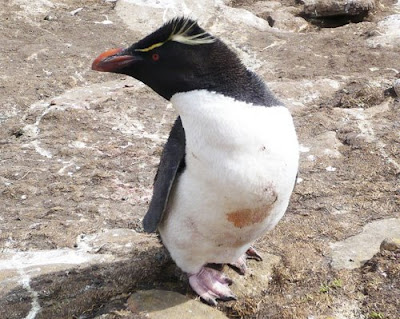 Everyone on these Antarctic cruises is instructed not to approach the wildlife - - to stay back at least 15 feet from the birds (or farther for some species). But if you stand still, some of the birds will walk up to you. The Rockhoppers seemed curious, in a grouchy way, waddling up to members of our group and staring at them as if to say, "what the hell ... ?" 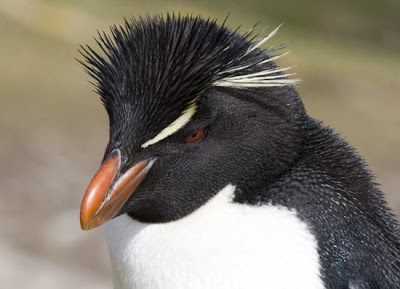 Kim pointed out that, with their spiky hairdos and weird expressions, the penguins were misnamed; they really should have been called Punk-Rock Hoppers. 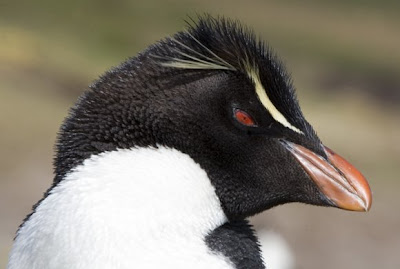 ("Hey, human chick, you wanna step outside and repeat that?") 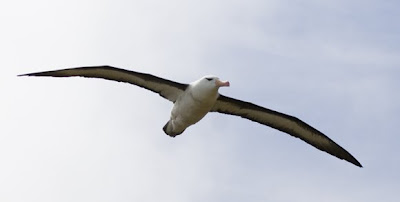 Of course, once we were into this mode of anthropomorphizing (that is, applying human characteristics to animals), it was hard to get out of it. Nesting on the same hillsides as the Rockhoppers were colonies of Black-browed Albatrosses. We had seen many of these at sea the day before (along with lesser numbers of the much larger Wandering Albatrosses). But here we were able to watch them up close, tending their young, and we were struck by how they seemed gentle, benign, even wise. 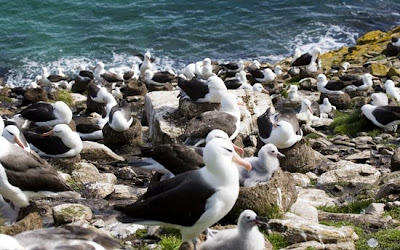 The Falkland Islands are a major nesting area for Black-browed Albatrosses. According to some estimates, 80 percent of the total world population nests here. 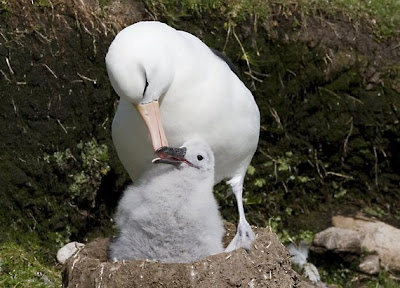 Their nests are built up of dried mud, and shaped like little volcanoes. In many of the nests we could see the single young, still covered with fuzzy grayish-white down. Almost every active nest was tended by one of the parents; presumably the other parent was away foraging at sea. We saw a few exchanges where one adult would come back with food for the young, and after various greeting rituals, the adult that had been there would leave. 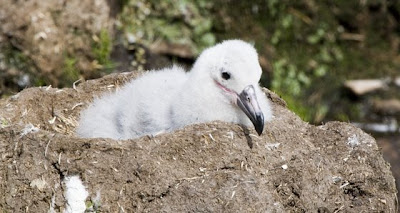 Admittedly, the young were cute enough that they seemed worth guarding with care! 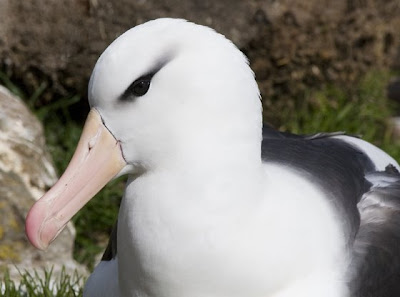 Maybe we can’t really tell what the adult albatrosses are thinking, but they do have beautiful faces. Can you deny the sense that these look like gentle giants?
Posted by Kenn Kaufman at 11:47 PM