Down With the System

From Home Base, Kim writes: I woke up this morning thinking about the Antarctic trip. Not that that's unusual. I've thought of little else since we got back! But, last night Kenn and I had dinner with our dear friend Delores Cole. You might recall that I mentioned in an earlier post that Delores was on the trip too. Of course the main topic of conversation was the trip, and we spent a lot of time talking about some of our favorite experiences. So, naturally, I dreamt about it all night, and woke up feeling all energized by thoughts of icebergs, glaciers, whales, and of course, penguins. So, I've infiltrated the "daily trip reporting system" (an approach that I had to convince Kenn to use) to insert a few gratuitous and completely random photos. I'm sure Kenn will be TOTALLY fine with it! He really understands me and my "quirky" ways. He's always so understanding and tolerant. Plus---he's not here right now! : )
Kenn doesn't normally like the approach of --and then, on this day, we went here and saw that-- et cetera. But, I convinced him that for this particular trip, it would help to put things in perspective if we put our posts in chronological order. I felt it would give a sense of time and place to the birds and wildlife we encountered, and a better understanding of the time at sea between each landing. And, as long as we included photos, and Kenn added all the juicy bits of detail about the birds, I didn't think it would be boring. So, if you're bored reading about albatross and whales, penguins and icebergs, please don't tell Kenn! Instead, maybe you could help me out by posting comments saying things like: "Wow! What a GREAT way to share an experience!" Or, "Gee, This approach REALLY works well for me", or something like that! Boy, Kenn had better come home soon! Yikes!

So, now that I've convinced Kenn that we should describe the trip in day-by-day order, here's a post that does just the opposite: here are some random trip photos, courtesy of Kim "the brat" Kaufman: 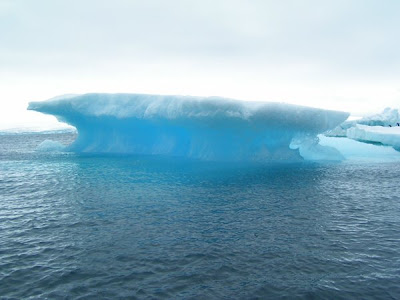 I could not have imagined how colorful and lovely ice could be. On the first day of the trip, a woman admitted to me that she was somewhat disappoined that her husband had picked the Antarctic as their trip destination for this year, because it seemed to her that the place would be colorless: "I mean, it's all white for goodness sakes!" When I related this to Kenn, he was quiet for a long time. What he finally said to me, in his quiet wonderful way was so beautiful. He said, "A painter often will work with just a limited palette. That's what brings out the drama and the depth in each color." 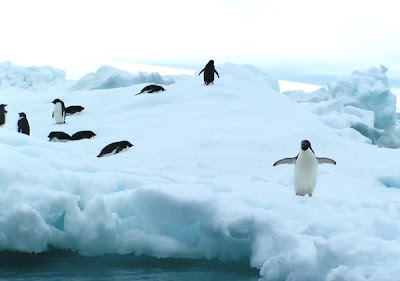 One of the surprisingly challenging things about the trip was simply trying to have dinner. I would say that roughly 1/3 of the time, just as meals were being put on the table, someone would yell, "Whale!" Or, "Iceberg!" The entire dining room would clear out, and we'd all stand shivering together on the back deck, admiring what ever glorious "thing" happened to be drifting past. In this case is was not "just" an iceberg. It was an iceberg sprinkled with Adelie Penguins! 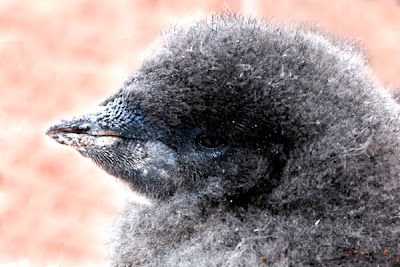 I spent several minutes kneeling on the ground studying this little Adelie Penguin chick. "He" had just been fed, and was happily napping in the sun. Occasionally, he would open his eyes and blink at me, but beyond that our interaction was pretty passive. At least physically. It was impossibly hard, but I resisted the overwhelming urge to reach out and softly stroke the top of his head. But, emotionally, this encounter with one little penguin had a profound impact on me. Although I've thought about it a lot, I still can't really say why. I mean, I know you can't see it in this picture, but beyond this one adorable individual, are thousands of Adelies, looking pretty much like exactly like this one. But, there was just something about "my" little penguin. 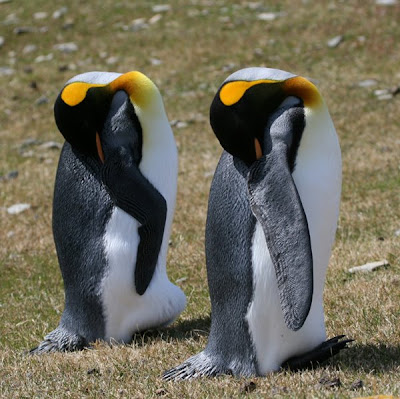 King Penguins are just the coolest thing that Mother Nature ever dreamed up! I gotta tell ya that a lot of the bird names out there, are, well, OUT THERE! I mean, Cinnamon-rumped Foliage Gleaner? Come on! But, whoever named the King Penguin nailed it! I have no idea whether he ever did, but I secretly hope that Elvis got to see a King Penguin at some point in his life. I know that if we could undertand Penguin-eese, a lot of the trumpeting going on in the King Penguin colony would sound like, "Thank you! Thank you very much!" In this photo, twin "Elvis" Penguins take a bow. 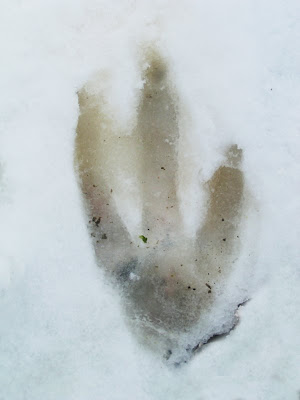 Well, I've gotta make tracks. ; ) Kenn will be home soon, and I don't want to get caught in the act! It's been fun being bad with you. And, remember to help me out here, K&K blog readers.... Make sure you tell Kenn how you love the trip reporting method. btw...In case you're wondering, the footprint was made by an Adelie Penguin. I can't wait to show you pictures of their feet up close!
Posted by Kimberly Kaufman at 8:43 AM

Email ThisBlogThis!Share to TwitterShare to FacebookShare to Pinterest
Labels: Antarctica