From home base, Kenn writes: (now that I've been so cutely interrupted by Kim's last post ... That's the thing about Kimmer, I can't stay mad at her for more than a few seconds at a time.) On January 8, when I got out on deck around 5 a.m., we had left the Beagle Channel itself but the islands of Tierra del Fuego were still visible off the stern. Dozens of Sooty Shearwaters and Greater Shearwaters, plus various other seabirds, were around the ship. The last of the land soon disappeared behind us but we would continue to see large numbers of seabirds all day. Most seabirds are beautiful creatures and amazing masters of flight, and in addition, many of them present fascinating challenges in identification.

Check this out. I know you can’t see much detail, but this is an unaltered photo taken from the rail of the upper back deck of the ship, with six seabirds captured in the same frame. From left, they’re a young Wandering Albatross, a Brown Skua, three Greater Shearwaters, and a Northern Giant-Petrel. I’m not saying every moment was like this, but it was common to have 30 or 40 individual birds visible at once. 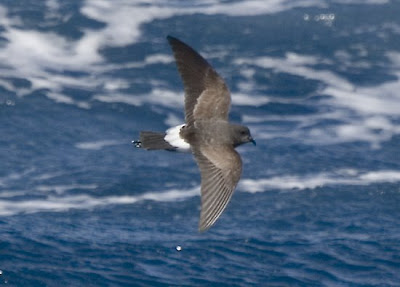 Watching birds here was good practice for identifying them back in North America. This Wilson’s Storm-Petrel nests only on islands in the far southern oceans, but it’s common in the northern summer off the Atlantic Coast of the U.S. and Canada, and scarce off the coast of California. 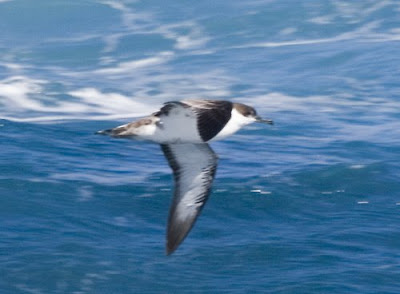 Greater Shearwater is another bird we can see close to home in the northern summer. At that season it’s common off the Atlantic Coast of the U.S. and Canada, but it nests only on islands in the South Atlantic. 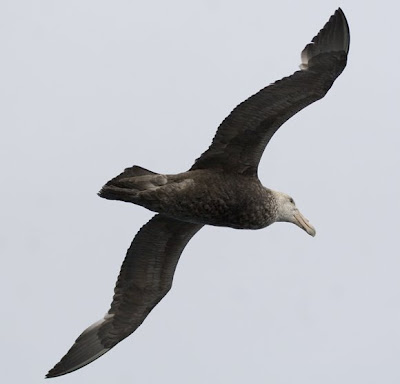 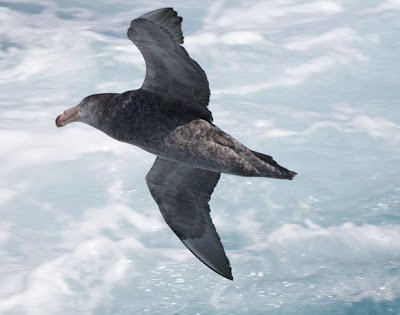 ... and then at this Northern Giant-Petrel. Both species are variable in plumage, and the best way to tell them apart is by the color of the tip of the bill: green on the Southern, red on the Northern. Those who are red/green color-blind, as some excellent birders are, might note that the Northern's bill tip looks darker than that of the Southern. (These are poor names, incidentally, since both species live only in the Southern Hemisphere and their ranges overlap extensively.) 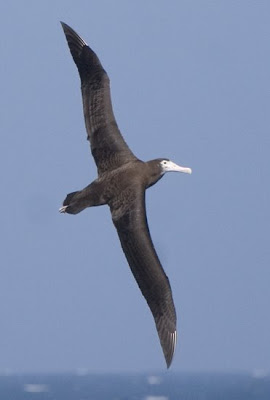 Variation reaches an extreme in the beautiful Wandering Albatross. It has five distinct populations, nesting on different island groups, that are thought by some to be separate species. All of them vary at least a little with age, so there are a vast number of different plumages possible on these birds. Add to that the fact that Royal Albatross can be very similar to Wandering, it has two distinct populations that also might be separate species, and it also varies with age. The richly colored brown bird above is one of the youngest Wandering Albatrosses. This bird, extensively white above, is an older Wandering Albatross and may be an adult male, although some old males can become even whiter than this (and some adult females might duplicate the appearance of the bird in the photo). 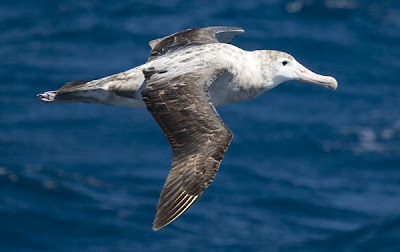 This partially brown bird is in the Wandering Albatross complex and is almost certainly a young bird, although there are a few populations in which even the adults show a lot of brown. We saw many such variations today, and enjoyed discussing the identification of all of them. 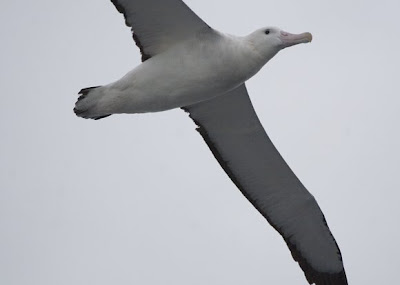 Fortunately, we often got to look at Wandering Albatross individuals from very close range!
For this voyage, Victor Emanuel Nature Tours (VENT) had filled 85 of the 110 spaces on the Clipper Adventurer. You can’t have 85 participants and only one or two leaders, so VENT had recruited a team of leaders, all of them long-time friends of mine, starting with Victor Emanuel himself. Victor has been a friend of mine since the mid-1970s, when I was a teenager and he hadn’t yet started his tour company. Also along as leaders were Barry Lyon, a seasoned world birder and one of the professionals in the VENT office; Louise Zemaitis, great all-around naturalist, teacher, and nature artist; Michael O’Brien, a bird identification expert and lead author of The Shorebird Guide; and Lars Jonsson, from Sweden, probably the most renowned bird painter in the world today, and a leading authority on bird identification as well. Dr. John Fitzpatrick, director of the Cornell Lab of Ornithology, was supposed to have been a leader on this trip, and at the last minute he was unable to go. In his place, he sent Brian Sullivan, head of Project e-Bird for the lab, and another expert on bird identification, especially seabirds. Finally, the ship’s ornithologist, Geoff Carpentier from Canada, was also on deck, taking part in the discussions of identification from the perspective of his experience in these waters.
So a day at sea, looking at challenging or tricky seabirds, turned into a wonderful ongoing discussion and series of impromptu seminars in birding. For me, with my long-time interest in advanced bird identification, and for Kim, who is interested in all of these things and who was seeing some of these southern seabirds for the first time, this was a day of total fascination. Some people might imagine that all those hours on the open ocean could become boring, but for a birder, nothing could be further from the truth.
Posted by Kenn Kaufman at 8:12 PM