From home base in Ohio, Kenn writes: On the afternoon of January 7, after a day of birding around Ushuaia, we boarded the Clipper Adventurer. By about 7 p.m. we were under way, cruising east down the Beagle Channel. That might sound like a specialized offering on cable, but it’s actually a narrow strait of water running through the southern part of Tierra del Fuego. It was named for The Beagle, the ship on which Darwin traveled. Captain FitzRoy of The Beagle was responsible for exploring this waterway at the southern tip of South America during two voyages in the 1820s and 1830s.

During the evening we were mostly admiring the scenery -- just as Darwin did when he arrived here in 1833 -- but of course we were also birding, and people who stayed on deck late enough saw the first penguins of the trip, the first of the eight species that we would encounter. These were distant views of swimming birds, and observers were startled to hear that these mysterious distant "ducks" or "grebes" were really Magellanic Penguins. The photos below were all taken a couple of days later in the Falkland Islands. 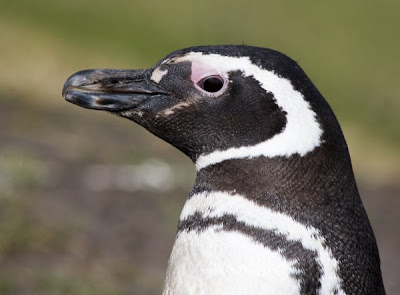 The first thing to notice in this close-up portrait is the color of the background: green. The public may think of penguins as birds of the deep-freeze zones, but Magellanic Penguin belongs to the genus Spheniscus, a group of four penguins that are all limited to mild climates. These are Galapagos Penguin on the Equator, Humboldt Penguin in western South America, Jackass Penguin (yeah, that’s one of its official names) in southern Africa, and the Magellanic, which is found all around the southern coasts of South America. The latter has several large colonies in Argentina, and seeing it in the Beagle Channel was no surprise.
The second thing to notice is that the bird has, let’s face it, sort of a slow-witted expression. Penguins aren’t at their best on land anyway, but Magellanics come across as rather dim bulbs. 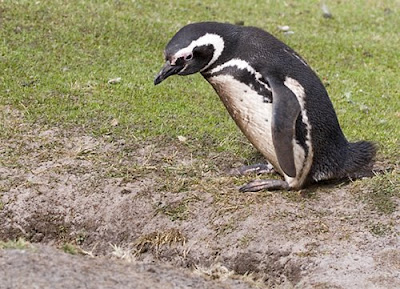 As we would see on the Falklands a couple of days later, it’s a common thing to see Magellanic Penguins standing around peering at holes in the ground. But they have a good excuse: that’s where they nest. They’ll dig burrows up to six feet deep, laying their eggs in a cavity at the end of the burrow, and tending their young underground until the chicks are large enough to be safe from most predators. Penguins in the Antarctic nest out in the open, but several kinds in the temperate zone are burrow nesters. 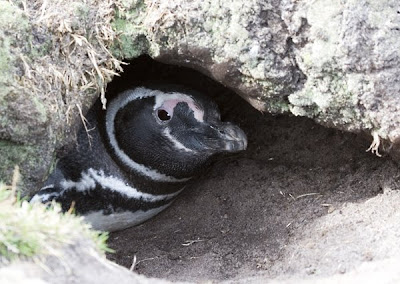 Here’s an adult Magellanic Penguin peering out of its burrow. The striking face pattern is a lot less obvious once the bird is in the shadows, and it may serve as disruptive coloration, breaking up the bird’s outline and making it less conspicuous. 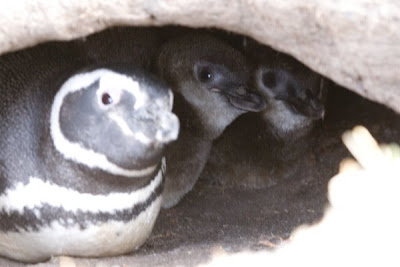 Zooming in and overexposing another shot of a penguin in its burrow, we can see a couple of chicks lurking in the background. 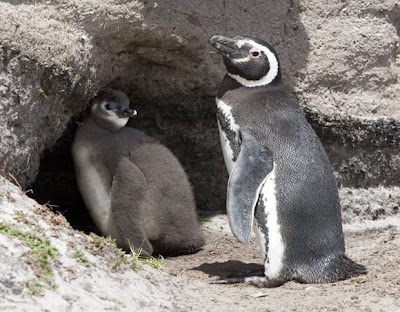 And here’s a better look at a slightly larger chick out at the entrance to the nest burrow with one parent bird. The chicks are fed by both parents for at least two months before they molt out of their fluffy down and go out to sea.
This might seem like an odd juxtaposition, but I have to stop writing about baby penguins now because our rock band is performing in a couple of hours. The band has had only three practices in the eight days that Kim and I have been home, and there's a certain adrenaline rush involved in trying get mentally prepared and get back into rock-'n-roll mode. But I'll try to blog more about the Antarctic trip tomorrow.
Posted by Kenn Kaufman at 6:11 PM