The Winter of our Disconnected Wren

From home base in Ohio, Kenn writes: A number of years ago when I was a kid birder, bumming around North America to learn as much as I could about birds, my friends and I started to get interested in Winter Wrens.
Of course, there are plenty of reasons to be interested in the Winter Wren. For one thing, there’s the question: is it a bird, or a rodent? Living in dense woods, it can be almost impossible to see sometimes, mousing around in the undergrowth, crawling under logs and vine tangles. (When it does pop up into the open, you have to be very lucky or very skillful to get anything better than the crappy photo shown below.) But when it starts to sing, then you get a different idea. It has a beautiful, long, varied, tinkling series of runs and trills, not what you’d expect to hear from a mouse, or even from the average bird. 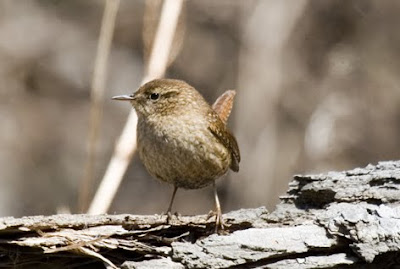 An "Eastern" Winter Wren at Magee Marsh, Ohio, in early April. Winter Wrens are common early spring migrants along the boardwalk at Magee, but they're not easy to see; often they're foraging under the boardwalk itself.
However, my friends and I were interested for another reason. At the time there were no bird guides that illustrated (or even mentioned) the difference between eastern and western Winter Wrens. But in our birding travels, trying to glimpse Winter Wrens in various places, we had noticed that their callnotes sounded different on the west coast than they did in the east. They all gave a fast double note, but the tone quality was different: the eastern birds called a low cheff-cheff, with the tone of a Song Sparrow’s call; the western birds gave a squeaky chimp-chimp, with the tone of a Wilson’s Warbler call. As more and more of us started to focus on the question, it was amazing how almost everyone made the same comparison of the callnotes.
I knew that the eastern and western birds had been described as different subspecies; but in many cases, subspecies are based in tiny differences that aren’t readily apparent. At some point, though, I was looking at specimens at the American Museum of Natural History in New York, and was stunned to find that eastern and western Winter Wrens actually looked very different. The eastern birds were a paler grayish-brown on the chest, with lots of darker mottling, while western birds were a smoother rich golden-buff on the chest, and richer brown on the back.
These days, of course, many field guides show the two forms, or mention the different callnotes, and many of the more serious birders pay attention to the difference. But before long, all birders may have to take notice, because it’s very likely the eastern and western birds will be split into two species. The American Ornithologists’ Union committee responsible for such decisions hasn’t acted on it yet, but some Canadian researchers have found convincing evidence that the two are, in fact, distinct species.
Ornithologist Darren Irwin, of the University of British Columbia, discovered an area near the town of Tumbler Ridge in northeastern BC where the two forms of Winter Wrens are found side by side. They are readily recognized by their songs here, and they apparently don’t interbreed at all, or if they do it must be a rare event. Genetically they are quite distinct. Professor Irwin and his grad student David Toews have published some of their results in technical journals; you can read an abstract of one paper here and you can read a more popular account, with links to samples of the songs, here.
What will the "new" species be called? "Pacific Wren" has been suggested for the western bird; the eastern bird might remain as "Winter Wren" or it might get a different modifier. The western bird apparently doesn’t stray eastward past the Rockies very often, but the eastern one does stray to the southwest. When I lived in Arizona, where Winter Wrens were scarce winter visitors, I occasionally found both eastern and western types on the same day.
This may not be an "official" split for a few years yet, but this is a good time for birders to start thinking about these fascinating little birds, and paying attention to their differences.
Posted by Kenn Kaufman at 1:20 PM