From amid a huge file of still-unprocessed photos, Kenn writes:

Baby leatherback sea turtles hatch out of eggs buried in sand and start a desperate scramble down the beach toward the water, and if they make it, they may not see land again for years. During those years they are maturing from palm-sized rubber toys into enormous sea monsters. Full-grown adult leatherbacks are the world’s largest turtles, up to seven feet long and weighing up to a ton. They are also the most wide-ranging turtles on the planet, found almost throughout the world’s oceans, traveling from the tropics to the edges of the polar regions. They are also, throughout their vast range, seriously endangered.
With streamlined leathery shells and powerful front flippers, the leatherbacks can fly through the depths with astonishing grace and speed, diving to more than half a mile below the sea surface and staying submerged for more than an hour. Their great size is no hindrance in the sea, where they are the most graceful of giants. Male leatherbacks will spend the rest of their lives in this state of grace. But unlike whales or dolphins, which have developed the ability to give birth at sea, adult female leatherbacks must go through the ordeal of returning to land to lay their eggs.
And an ordeal it must be, too, when she comes to land. As the female leatherback crawls from the surf onto the beach at night, in an instant she is transformed from graceful ballerina of the sea to clumsy, heavy drudge, plowing more than a thousand pounds of hard flesh forward with slow sweeps of her flippers, dragging herself face-first through the sand as she seeks the perfect spot to lay those precious eggs. Talk about a mother’s love demanding sacrifice. It may take two or three hours or more for her to drag herself ashore, find the right spot, dig a hole, lay the eggs, cover them over, and then drag herself, exhausted, back to the sea.
If we were to stumble across this phenomenon by chance, it would be our instinct to stay far back, to avoid disturbing this intimate ordeal of an endangered species. But Kim and I were lucky enough one night last week to be at Matura Beach, Trinidad, as insiders. We were in the company of local wardens who are almost as extraordinary, in their own way, as the turtles. Some of these men have been walking these beaches three or four nights a week during the nesting season for the last twenty years. Their devotion to the huge reptiles is obvious, but they also know exactly what visitors can and cannot do. So they told us when we had to stay back with lights off, when we could approach, when we could actually touch the mother leatherback as she was laying her eggs. Their guidance gave us the confidence to move in close without fear that we would seem disrespectful of the great beasts. 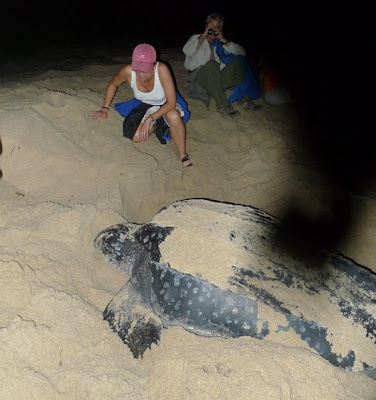 Here's a size comparison. Admittedly, Kim is quite petite, but our friend Pete Dunne (just behind Kim, with binoculars) is a normal-sized guy, so you can see that the female leatherback sea turtle is a huge animal.
The wardens had flashlight with red lenses (red light, they said, did not disturb the turtles), and in the glow of these we could watch the process. The huge female leatherback was digging with extraordinary delicacy, using her hind flippers to ladle out scoops of sand and toss them to the side, while her head and front flippers were merely spread-eagled on the sand. Periodically she would reach down with her hind flippers as if testing the depth of the hole she had created. Only after she had started laying eggs did the wardens tell us we could turn on lights and take flash photos. 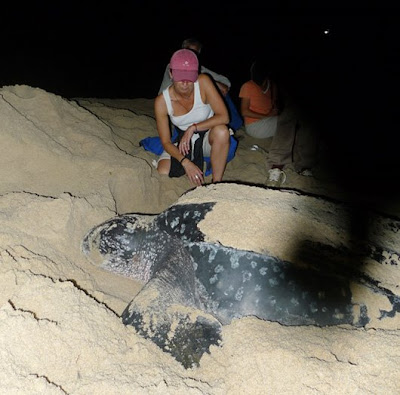 Without the encouragement and guidance of the dedicated turtle wardens at Matura Beach, we never would have dreamed of getting this close to these colossal animals. 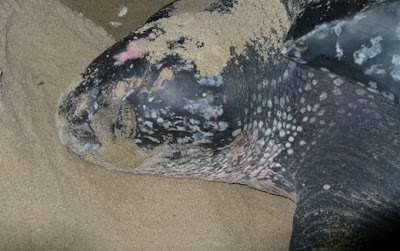 Here's a closeup of the head of one female leatherback while she was laying eggs: eyes closed, seemingly in a trance. Her head was larger than a bowling ball. 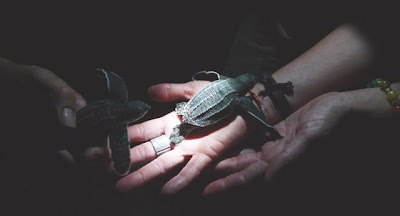 The wardens found a group of baby leatherbacks that had just hatched and were scrambling down the beach toward the water in the dark. To our amazement, the wardens picked them up and handed them to us for closer looks. Apparently this doesn't do the baby turtles any harm, and the wardens routinely handle the animals as part of their monitoring and research.
There were a number of people on the beach that night -- not only our little group of Leica-sponsored birders, but also the wardens on the beach, a number of EarthWatch volunteer helpers, and a couple of groups of students and tourists. And we were all reveling in the experience, but not in a partying sense of reveling, more like a spiritual rush, a deep sense of awe. It was extraordinary to watch these leviathans out of their element, vulnerable and slow as they finished the task of covering over their eggs with sand and went dragging back down the beach, looking slow and spent, soon to disappear again into the wilderness of the sea.
Posted by Kenn Kaufman at 2:26 PM