From the Asa Wright Nature Centre, Trinidad, Kenn writes: Birding in Trinidad is turning out to be even more fun than I’d expected.
I started reading about Trinidad -- and about the Asa Wright Nature Centre -- when I was just a kid. The center was established in 1967, making it one of the first nature centers anywhere in the tropics, and I first heard about it as a place that people would go for their introduction to tropical birds. But I had my tropical-bird intro in Mexico, since (as a penniless teenager) I could hitch-hike to the border and then take the cheap buses south. Later, when I ventured deeper into the tropics, I went to Peru and Ecuador and Venezuela, not to Trinidad. Working as a professional leader of birding tours, it made more sense for me to take groups to Venezuela (with a total bird list of over 1400 species) than to the island of Trinidad, just off the Venezuelan coast (with a total bird list of fewer than 500 species). So even though I knew Trinidad was famous for birding, I had already seen virtually all the bird species possible on that island nation, and I just hadn’t gotten around to visiting.
Fast-forward to July 2009. Jeff Bouton was looking to promote ecotourism to Asa Wright Nature Centre, and looking for people to try out the new Leica digiscoping setup, so (as Kim has described in a separate post), here we are. And as I said, birding in Trinidad is turning out to be more fun, more interesting, more exciting than I’d expected.
Take our evening visit to Caroni Swamp. I had been hearing about Caroni for decades -- one of the most famous birding swamps on the planet -- and a couple of evenings ago, we were able to visit. Lester Nanan took us in on his boat, a wide-hulled, flat-bottomed boat, practically a barge, so stable that we were even able to set up scopes and tripods for viewing from the deck. 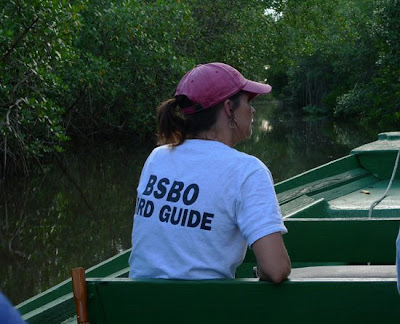 Kim on the watch from Lester Nanan's boat among the mangroves

We were out cruising channels through the mangroves for more than three hours, seeing all kinds of amazing birds -- the American Pygmy Kingfisher, a tiny kingfisher, like a green-and-orange sparrow with a huge honking bill; the Greater Ani, a big, black, long-tailed bird with staring yellow eyes, looking like a flying yardstick when it flopped into the air; the Bicolored Conebill, a little bird that refused to look as drab and colorless as its illustration in the book; and dozens more.

But the star of the show, the reason why thousands of people visit here, is the Scarlet Ibis. This brilliant red bird, this glowing, shockingly red bird, all red with tiny black tips on its outer wing feathers, comes in to Caroni Swamp to roost by the thousands at some seasons. In July they were only coming in by the hundreds. But even hundreds of Scarlet Ibises make for a jaw-dropping spectacle.

We anchored about a quarter mile from a mangrove island where many of them would come to roost, and watched in awe as these spectacular birds came swooping in out of the sunset. Lester Nanan told us that years ago, people used to poach the ibises. But when Trinidad gained its independence in 1962, the Scarlet Ibis was designated as the national bird, and with the growth of national pride, the poaching stopped. 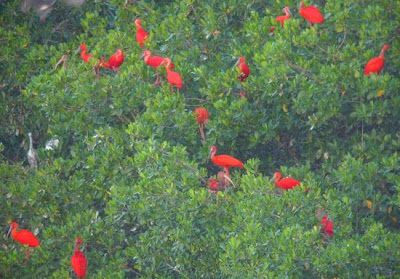 A small part of the Scarlet Ibis concentration. The photo may not look great, but consider the fact that we were digiscoping it, with the tripod set up on a boat, from a quarter mile away --

In years past I had taken tour groups to places in Venezuela where seven species of ibises occurred, where Scarlet Ibis was just one of the local species. Even there, of course, you don’t overlook this brilliant red bird. But the species never had the impact on me there that it did in Caroni Swamp, where Scarlet Ibis was THE ibis, the emblem bird of this wonderful island. Kim was calling the birds "eye-burners," and the name certainly seemed appropriate. It helped that we were toasting the birds with rum punch that was about the same color as the ibises, but the sight alone would have been intoxicating. 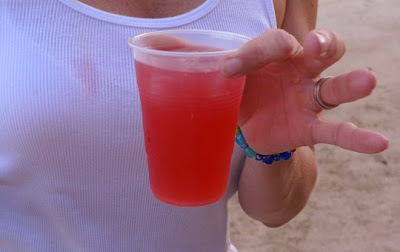 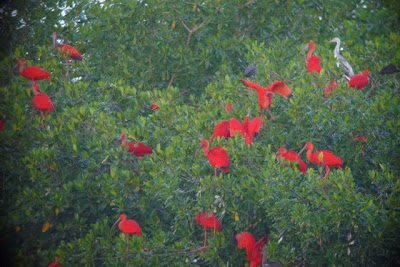 Another digiscoped view of a small part of the ibis concentration