Warblers On The Brain 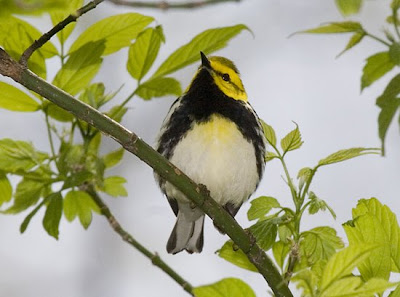 A Black-throated Green Warbler pauses in northwest Ohio, along with a few hundred thousand of his fellow warblers

From Oak Harbler, Ohio, Kenn writes: See that typo? I’ve done that dozens of times recently. We’re actually located in Oak HARBOR. But for the last three weeks, whenever my fingers type the letters A - R - B, autopilot takes over and finishes the word with L - E - R. It’s that time of year. It’s warbler season.
More than 50 species of warblers occur north of the Mexican border, and many of them are abundant, but most people never notice them at all. Because the warblers are tiny, hyperactive, and fond of hiding among dense foliage, they simply escape the attention of the uninitiated. For the average citizen, warblers exist only as the occasional flit of yellow between the treetops, not enough even to register on the conscious mind. But for those who have discovered birds, warblers are magical creatures, a dizzying galaxy of feathered delights. 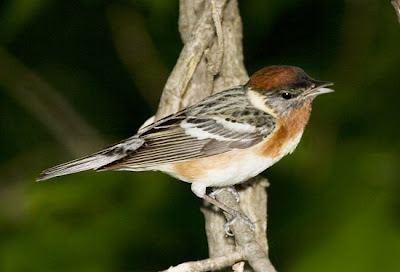 A male Bay-breasted Warbler, with its tones of burnt chestnut

Because they thrive on insects, almost all the warblers migrate to the tropics for the winter. When they come flooding north in spring, resplendent in the colors of their breeding plumage, birders go flooding outdoors to see them. Most of the warblers are primarily eastern, and east of the Rockies there are many regions where more than 30 species of warblers are possible in the spring. Going out to look for them is like a treasure hunt. We never know which species we’ll find, and we go out again and again, trying to connect with as many warblers as possible during the brief period when they pass through on their way north. 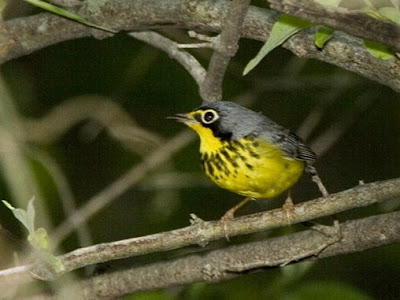 A Canada Warbler lurks in a thicket on its way north through Magee Marsh, Ohio


The finest place for observing spring warblers in the month of May is in northwestern Ohio. When the northbound migrants reach the south shore of Lake Erie, they pause, often for days at a time, resting and feeding as they prepare for their next flight northward. Literally thousands of warblers can be found here on certain days. The most famous spot for observing them is the boardwalk through the swampy woods at Magee Marsh Wildlife Area. Here the warblers gather in droves, often foraging at eye level in the trees along the boardwalk or along the edge of the parking lot. Birders gather in droves also, thousands of birders, from seasoned experts to newcomers seeing their very first warblers. Photographers gather here, too: warblers are famously difficult to photograph in most places, but here they seem almost to pose (briefly!) for the cameras. During the month of May, there are undoubtedly more warbler photos taken at Magee Marsh than in the entire rest of the United States combined. 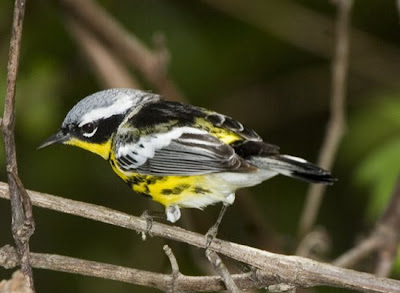 The Magnolia Warbler is the most abundant migrant through northwestern Ohio for a brief period in mid-May every year
The Black Swamp Bird Observatory (BSBO), where Kim is executive director, is located along the entrance road to Magee Marsh, so we’re in a wonderful position to interact with the thousands of birders and thousands of warblers that come here in spring. The month of May -- we call it "May-hem" -- is a whirlwind of activity and lack of sleep for us, and it can be exhausting, but I wouldn’t want to be anywhere else at this season. 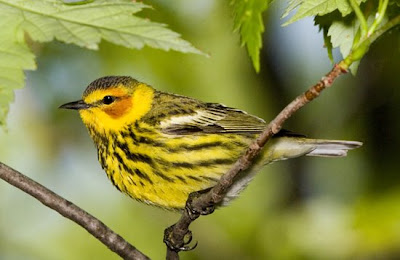 A Cape May Warbler shows off its tiger stripes

All of the warblers are wonderful, of course, but some cause more excitement than others. Sheer beauty is one cause for excitement -- we always hear "ooh" and "aah" whenever a bright male Blackburnian Warbler pops into view, stunning in its Halloween hues -- but with birders, of course, rarity is an even bigger draw. The striking little Golden-winged Warbler has become very uncommon in recent years, so one obliging male along the Magee Marsh boardwalk a week ago caused quite a stir. Josh Engel, who was guiding bird walks for BSBO that morning, told me that he estimated more than 200 people looking at this bird at one point in the morning. I was there later in the day and calculated there were over 100 people watching it then. Josh said he was sure that more than 1000 birders saw this same individual Golden-winged Warbler during the course of the day. 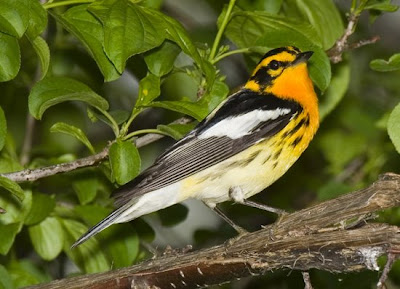 When we talk of rare warblers, the true prize is Kirtland’s Warbler, one of the rarest birds in North America. Its total population as of 2008 was over 1,700 pairs, but at a couple of points in the 1970s and 1980s its population dipped below 170 pairs, a terrifyingly low number for a songbird; it was seriously close to extinction. Kirtland’s Warblers nest only in a few counties in Michigan (and at a couple of sites in Wisconsin and Ontario), they winter only in the Bahamas, and extremely few are ever seen in migration between these locations. But northwestern Ohio is one of the few areas where migrants are seen several times per decade.
One of those rare sightings was made on Sunday, May 17th, in a plot of woods along the entrance road to Magee Marsh. This Kirtland’s Warbler was found and identified by a sharp teenaged birder, Andy Johnson. He came to the Black Swamp Bird Observatory to tell us about it, and soon there were a score of eager birders scouring the woods where Andy had seen the Kirtland’s. The bird proved elusive, foraging quietly in a few pines and spruces within the dense woods, but during Sunday afternoon and Monday the bird eventually was seen by dozens of observers. It wasn't a brightly colored individual, and our photos of it didn't turn out particularly well, but we didn't care; it was the rarity that counted. 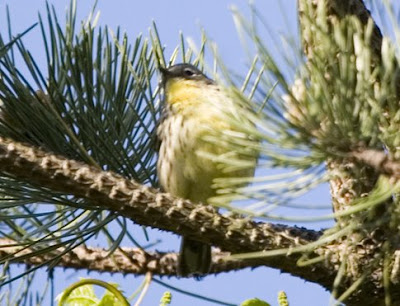 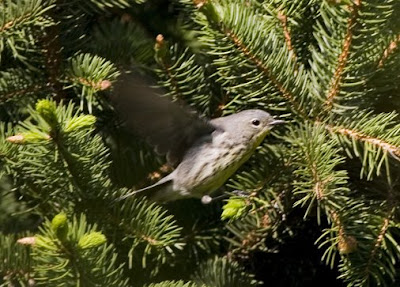 A super-rare Kirtland's Warbler perches and flutters in conifers at Magee Marsh, Ohio, much to the delight of scores of visiting birders

We still have a couple of weeks of fine warbler-watching ahead of us, because the last migrants will be moving through in the first days of June, but by that time May-hem will be over and the level of visitation by birders will go back to normal. Then we’ll just look forward to September, and seeing the warblers coming back south in their confusing fall plumages!
For more information about warbler-watching in northwest Ohio, see the Black Swamp Bird Observatory's birding pages.
Posted by Kenn Kaufman at 9:41 PM