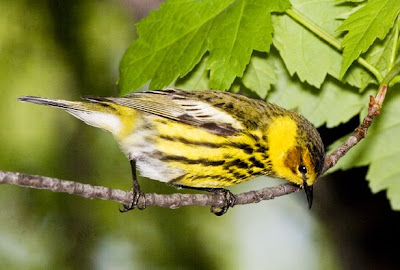 Cape May Warbler: named for Cape May, NJ, but in spring it's far more numerous at Magee Marsh

From Oak Harbor, Ohio, Kenn writes: For a few weeks every year, northwest Ohio -- and specifically the Magee Marsh Wildlife Area, which is practically our back yard -- becomes one of the most popular birding sites in the world. Literally thousands of birders come here to witness the warblers and other migrants that concentrate in the woods along the Lake Erie shoreline at Magee and nearby sites. The action peaks on International Migratory Bird Day (IMBD), the second Saturday in May. This year the timing worked out perfectly, with a huge arrival of birds obvious on the morning of Friday, May 8th. The variety of birds in the area was even better on Saturday, and continued to be outstanding through Sunday and Monday. I seriously doubt that any of the thousands of visiting birders went away disappointed.
The Black Swamp Bird Observatory (BSBO) -- where Kim is Executive Director, and I’m a volunteer birding guru -- is involved, up to its ears, in this birding spectacle. That’s most of the reason why we haven’t been posting anything on this blog recently! The observatory’s office is located on the entrance road to Magee Marsh, and the observatory sponsors a series of web pages on which I and others provide detailed information on birding the area. When it’s May and the mobs of birds and birders are arriving, our days are packed from dawn to late at night.
Looking back on the IMBD weekend just past, it was about as full and as satisfying as one could imagine. I had predicted on the website that Friday would have a big arrival of migrants. Some people follow my predictions and actually take days off of work or school when I make such a forecast, so it was a relief to head out at dawn on Friday and find that, indeed, there were swarms of warblers darting through the trees at Magee. That morning I met up for a brief round of birding with Dave Rintoul from Kansas State, one of the listowners of BirdChat, the granddaddy of all birding listserves. Then I raced back to a phone for an hour-long radio show about bird migration with Fred Andrle from WOSU in Columbus. Then I put the final touches on a program about migration, drove over to Port Clinton, and gave my migration talk at 6 p.m., and then our band played from 8 to midnight, in a benefit concert for the Ohio Young Birders Club. 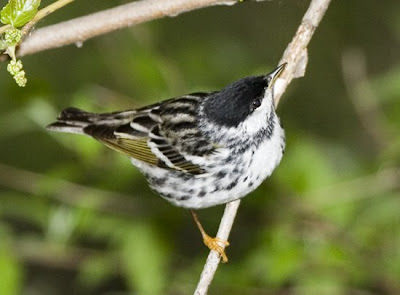 A male Blackpoll Warbler. The long-distance champion migrant of the warbler world. Every individual that we see in spring has already survived at least one round-trip flight to South America.


Of course we didn’t sleep much that night, because we had to be up at dawn for International Migratory Bird Day. The day was insanely busy. I would have estimated somewhere between 5,000 and 10,000 visitors in the general area, but the Division of Wildlife reportedly estimated closer to 15,000. Who knows? But there were more than enough birds to go around. With strong southwest winds, the warblers and other migrants were concentrated along the north edge of the woods at Magee, many of them feeding low for wonderful views. The photographers were having a field day, blasting away at birds that are usually elusive denizens of the treetops. Scores of beginning birders were being taken on birdwalks led by experts. (This year, through an arrangement with the tour company Tropical Birding, we have several world-class birders on the site, leading free birdwalks for BSBO every day until May 25.) Julie Shieldcastle and others from BSBO were putting on banding demonstrations, showing hundreds of people birds up close. It was an amazing and heart-warming extravaganza of warbler-watching. 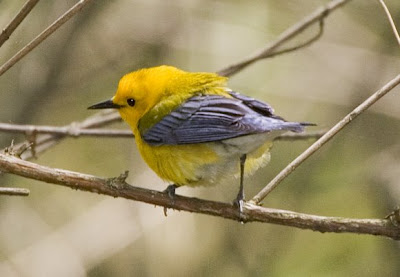 A male Prothonotary Warbler, glowing like molten gold in the swampy woods

Back at the observatory itself, it was a whirlwind of activity all day. Kim was in her element, inspiring everyone with the magic of birds. Vic and Lois were serving up lunch to hordes of hungry birders, Robert from Time & Optics was demonstrating binoculars and scopes, Kevin from Wildside Tours and Iain from Tropical Birding were telling people about other birding destinations to consider, and Karen and Hugh and Judy kept things bouncing in the gift shop / book store.
The real hosts of the weekend, however, the warblers - - the wonderful, varied, active, colorful, beautiful warblers - - continued to show off all day Saturday, Sunday, and Monday, as the crowds of birders continued to arrive to admire these little feathered gems. The great thing for me is that the birds are so unconcerned about the presence of all these people. They continue to forage actively within a few feet of the birders, oblivious to the oohs and aaahs and the camera flashes. If they were bothered, of course, they could flit back into the thickets and be safely away from us, because birders don’t go off the boardwalk and into the woods. So the warblers are able to feed and rest and refuel for the next leg of their migration, and the watchers are able to appreciate these little wonders at close range.

And by the time the weekend is over, Kim and Kenn are also in need of rest and refueling! Late Saturday night, I found myself trying to remember whether IMBD stood for International Migratory Bird Day, or Insane Madness Bird Daze, or Insomnia Makes Birders Dumb, or Incrementally Maniacal Bed Deprivation, or just, I May Be Dead!

For more background on this entire phenomenon, see the website of the Black Swamp Bird Observatory (BSBO): http://www.bsbobird.org/

and the observatory’s birding pages: http://www.bsbobird.org/Birding/

And for another fine perspective, see the account by Kevin Loughlin of Wildside Tours: http://blog.wildsidenaturetours.com/ (hint: if you're on bird overload by now, Kevin also has photos from Friday night's rock concert)

Or this account by top Ohio naturalist Jim McCormac (go back to May 9): http://jimmccormac.blogspot.com/

Or the always-entertaining posts from Dave Lewis and his "Birds From Behind":
http://burdzbuttz.blogspot.com/