From Home Base, Kim Writes: I know that in the dead of winter in Ohio the last thing you'd think I'd be thinking about are hummingbirds. But yesterday, while looking through my collection of bad fuzzy videos, I found one that I thought I had lost.
You can't imagine how happy I was to find this, in spite of its entry into the bad fuzzy video vault. I know the video is tiny on the screen (if anyone has suggestions on how I can make this work more effectively, please share!) it's sort of out of focus, and in general, kind of crappy, but please take a look at it anyway. I hope that as fellow birders you'll understand how blessed I felt as I witnessed this tiny creature growing, learning, and ultimately striking out on "his" own.

Buzzed on sugar water delivered by his Mama, who took advantage of the feeder in our yard, "Junior" tests his wings. He would sit quietly for long periods, but, as soon as Mama brought him some sugar, he would become very animated, moving about the nest, and testing his tiny wings in the most adorable way.
Just to clarify: I don't actually know if the bird in the video was a male or female. With youngsters of the small "gorgetted" hummingbirds (of which there are 8 species in North America), sex cannot be reliably determined without having the bird in the hand. At that point, it comes down to things like: the shape of the outer primaries, width and shape of the rectrices (tail feathers) and the shade of white coloration in the throat. All that aside, the first day that we discovered our little treasure, I dubbed him Junior. I know, I know,---kinda lame and unoriginal, but it was the first thing that came to mind as I watched him that first day, and it just sort of stuck.
Since I first became fascinated with birds, one thing I always hoped for was to find an active hummingbird nest. Here in the east, we have only one breeding species of hummer, but it's a good one! Ruby-throated Hummingbirds are real charmers. Loads of attitude and charisma make up for their diminutive size and the lack of hummingbird diversity in our part of the world.
When Kenn and I got married and moved into our first home, it didn't seem likely that there would be many birds nesting in our yard, let alone a hummer. We were in the country, but surrounded on all sides by the monoculture of farm fields: Mostly corn, wheat, and soy beans. Our yard had a few mature trees, mostly Maples and Pines, but not much else to recommend to the discerning bird looking for a place to raise young. But, we hung our feeders with hope and the bird gods delivered.
We noticed hummers coming to visit our feeder and were thrilled. But, to be honest, we never even thought of looking for a nest. One afternoon we were out in the backyard when a hummingbird buzzed past and into one of the pines. We stood in utter astonishment as she began to work on what appeared to be the makings of a nest! Kenn dashed for the scope and we spent the next 4 hours watching this industrious little fairy as she labored to create her haven. 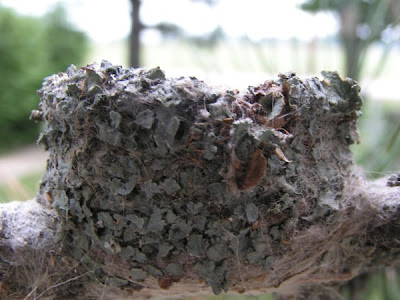 And here it is! What an amazing example of miniature architecture. From the day we discovered it, it took her 6 days to construct this masterpiece and lay 2 eggs.
The list of building materials sounds more like a spell from a Harry Potter book than nest material: Spider's silk and thistle down. A bit of lichen all around. Weave a cup and make a wish. Fairies fill this tiny dish....
After watching for many hours, I finally surrendered to the call of duty and went into the house to get some work done. About a half an hour later, Kenn comes rushing into the house with this dazed look on his face and says, "You've got to come out here and see this."
Back outside, and in the front yard this time, and, you'll never believe this....ANOTHER HUMMINGBIRD NEST. Less than 30 yards from the one being constructed in the backyard, our little overachiever had herself another nest, (Yes, it was the same female hummer!) and this one was filled to capacity with two stubby-billed little imps. I am not afraid to admit that I cried. It was just so spectacularly magical to have not one, but TWO hummingbird nests in our tiny, postage stamp yard, and to discover them on the same day! The realization that this tiny bird would be actively building one nest, while raising two demanding "kids" at the same time was just emotional overload for me.
After studying her behavior very closely, and getting her timing on and off the nest worked out, I waited until she had left the nest to forage, and I snuck in and took this photo. I stood on the tippy top of our ladder, and still had to hold the camera up as far as I could reach, try to aim as best I could, and then hope that I had gotten something.... 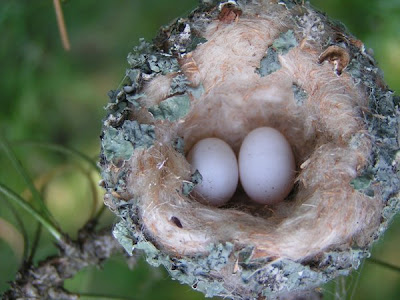 Aren't they beautiful? They look so big on the screen, but in life they were so tiny: about the size of your average kidney bean.

All this intense hummingbird action filled our life with high drama! On the very first day, we watched in horror as Junior's sibling decided that "he" was ready to face the big bad world, and launched himself out of the nest. Calling it a launch is perhaps a bit generous, and he didn't make it far before crash landing into a big clump of thistles. We rushed to his rescue, and after holding him for a few minutes to make sure that he was intact, he buzzed out of Kenn's hands and up into our Mulberry tree. 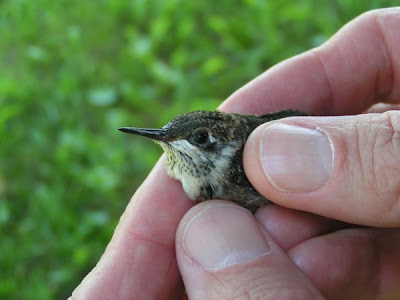 Check out that stubby bill. I was shocked at how rapidly their bills grew as we watched them visit our feeders.

Once he was safely in the Mulberry, he began calling, and Mama came to the rescue, feeding him for the rest of the afternoon before he disappeared. He returned the next day to visit the our feeder, and returned every day for about two weeks, eventually joined by Junior after he too made his brave exit from the nest.

I have a banding permit, and I would have banded him, but my gear was at the Observatory, and I didn't want to hold him long enough to go get it. Hummingbird bands are, of course, very tiny, and made of incredibly light weight aluminum, pressed into sheets, and stamped with the band number. The material is so thin that we cut them out with scissors. 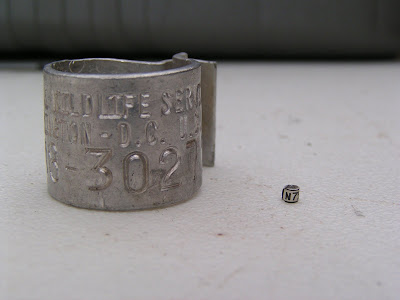 Here's one compared to a Great Horned Owl band.

I have had close encounters with thousands of birds at the Observatory's songbird banding station. I have banded dozens of Ruby-throated Hummingbirds, and my fascination with these tiny dynamos increases with each individual whose life I "touch" for a few moments. But, I will never forget this little feathered family and they way that they touched us for a few magical weeks.

Posted by Kimberly Kaufman at 8:23 AM