Antarctica vs. Galapagos: clash of claims 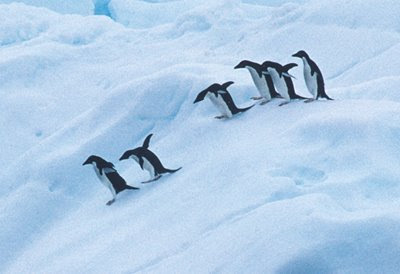 Adelie Penguins: Cool birds, but they're not in a biodiversity hotspot

From Birding Central, Kenn writes: If you follow news of the natural world online, you’ve probably seen the stories within the last week: "Antarctic islands surpass Galapagos for biodiversity." The headline has been repeated on dozens of websites and blogs. Everyone is marveling at this news because the Galapagos Islands lie on the Equator, and the generally accepted wisdom has been that biodiversity is greatest in the tropics and decreases toward the poles. That the South Orkney Islands, near the tip of the Antarctic Peninsula, should support more species than the Galapagos Islands is an idea that seems totally amazing.
It would be amazing, if it were true. But it isn’t true.
We live in an era when information can be flashed around the globe in an instant, perpetuated and multiplied a millionfold, whether it’s accurate or not. If it’s a remarkable piece of information and it seems to come from a reliable source, it will be repeated verbatim forever.
Here’s the background. Researchers from the British Antarctic Survey and the University of Hamburg carried out a detailed study of life on the South Orkney Islands and in the surrounding seas, down to a depth of 1500 meters. Between their own findings and a search of published records, they documented 1224 species of animals in the area, including five species new to science. All of this is very impressive, and the researchers are to be congratulated for their discoveries. It’s important for us to know that biodiversity at the edge of the Antarctic is higher than previously believed.
However, there was a problem with a press release from the British Antarctic Survey on December 1, 2008. This press release mentioned the Galapagos comparison just as a brief aside, but other news stories made this the headline. NewScientist presented it this way: "Antarctic islands surpass Galapagos for biodiversity." PlanetEarth Online said: "More Biodiversity in Antarctica than the Galapagos." Science Daily and LiveScience both said: "Antarctica Has More Species Than Galapagos." Dozens of websites, blogs, and newspapers repeated variations of the same.
It simply isn’t true, and I’ll give you the data in a minute, but it’s odd to me that so many news outlets repeated this uncritically. Certainly any birder on the news desk would have questioned it. After all, birders tend to be more aware of the realities of the world than most nonbirders. And I know I’m not the only birder who has been to both the Galapagos and the Antarctic.
Yes, the Galapagos Islands are arid and isolated. Diversity is not overwhelming there. Putting aside migrants and strays, the number of nesting bird species on the Galapagos is only about 60 -- but on the South Orkneys, the number is fewer than 20. What about insects? Birders often notice insects, if only for the fact that they’re often good bird food. The Galapagos have only about 400 species of beetles, to mention one insect group, but I guarantee that the South Orkneys have fewer than that. What about plants? After all, biodiversity involves all living things, not just animals. I don’t have figures for the South Orkneys, but it sticks in my mind that the number of flowering plant species on the Antarctic Peninsula is two. The Galapagos, arid and isolated though they are, have at least 550.
In fact, the figure given for the South Orkney Islands study, 1224 species of animal life, falls far short of what’s on the Galapagos. A study by Stewart B. Peck published in 1997 listed 1859 species of marine invertebrates in Galapagos seas, 2257 species of invertebrates on the islands and in fresh waters, and 431 species of vertebrates, for a total of over 4500 species. With new discoveries in the last ten years, the current number would be even higher. Add in the 1467 species of plants, fungi, and lichens listed in the Stewart Peck study, and the Galapagos are home to over 6000 known species of living things. The 1200-plus species around the South Orkneys are impressive, all right, but they don’t surpass the Galapagos.
Please understand that I’m not trashing the Antarctic region. The South Orkneys may have fewer than 20 species of breeding birds, but these probably add up to well over a million nesting pairs. Kim and I are leaving for the Antarctic in less than a month, and we’re insanely excited to be going. But I predict that ten years from now, people will still be repeating this false idea that the Antarctic has more biodiversity than the Galapagos, and I’ll still be wondering: How could so many news outlets repeat this without checking its accuracy?
Posted by Kenn Kaufman at 1:20 AM