From Concord, New Hampshire, Kim Writes: Well, we made it to New Hampshire where we gave a presentation and did a book signing tonight at Gibson's Bookstore.  Established in 1898, Gibson's is the oldest bookstore in New Hampshire, and might even be the oldest in all of New England. It was a wonderful night, and the nicest people came to our talk and stayed well after chatting about the book and nature in general. It's encouraging to see so many independent bookstores, like Gibson's!, that appear to be thriving and considered important parts of the community.

Before leaving South Hadley this morning to head north, we took advantage of some precious free time to get outside and explore with friends who live in the area. Jamie Bishop and her son Galen joined us, along with Josh Rose, and we spent a wonderful couple of hours at one of their favorite spots in the area.  It's one of those birding spots with a really distinctive name that you don't forget.  They call the area "The Honey Pots," but no one I asked was sure just how it got this name.

We didn't have a lot of time, but with the extra eyes and the knowledge of these local experts, our species list for the Book Tour Big 350 Species Challenge surpassed the 300 milestone!

Our walk took us down a lane to a community garden. I did what I always do when there are logs and limbs that have been lying on the ground for a while; I started flipping them over to see who or what was living below. We found some really interesting creatures to add to our list - and to our delight!  Once we had a look at who was under there, we gently put the logs back in place.

Under a section of discarded landscape timber
we found some Camel Crickets! 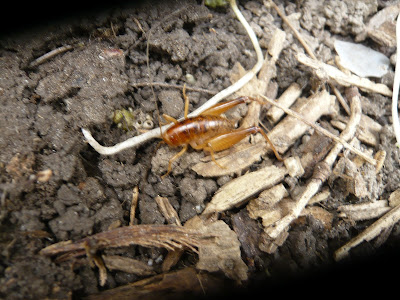 You never know what overlooked piece of debris
will make a good home for some tiny creature.

Under another piece of discarded wood, Josh--who just happens to be an expert entomologist--found and identified a couple of Rove Beetles. 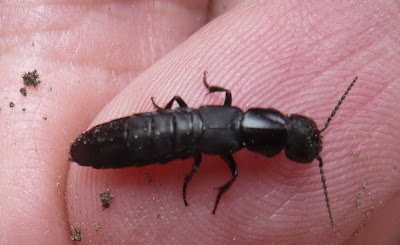 I had never seen them before and they were fascinating.  Rove Beetles are part of the large and ancient family Staphylinidea, and Rove Beetle fossils have been dated back to the Triassic, 200 million years ago.

The Rove Beetles were cool, but they reminded me a little too much of Earwigs, so I moved on to look at other things. (I really love insects, but Earwigs just creep me out so much that I call them "Slithering Ickwads."
did get to teach him something about photographing certain kinds of beetles.  It can be a challenge to get them to hold still for photos, but if you gently blow on them, many of them will freeze, and it worked today on our photogenic Rove Beetle. 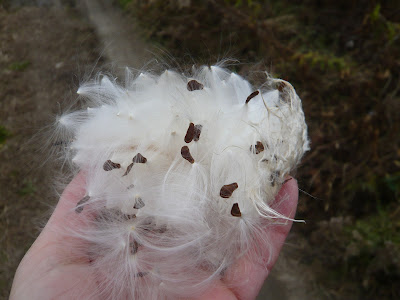 While searching for milkweed bugs I found some dried milkweed seed pods and took a few moments to appreciate the soft and silky fibers that help carry the seeds aloft on the wind.


Next we have a bittersweet tale of destructive beauty. 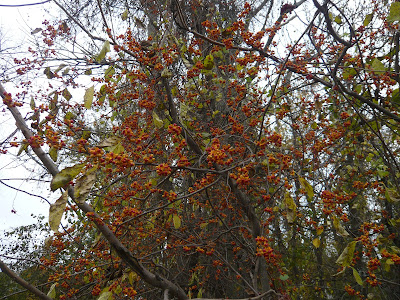 Along the roads and fence rows nearly everywhere in New England you will find this unfortunately beautiful invasive.  Oriental Bittersweet is a real problem in this part of the country (and other parts of the East and the Midwest, as well), owing partially to the fact that it's so beautiful that people are reluctant to eradicate it. Trouble is, this beauty eventually chokes out everything else in its path. It's easily confused with our native American Bittersweet, which is losing ground across its range, so it's important to learn how to tell the difference before removing it.

From the beautiful to the utterly bizarre... 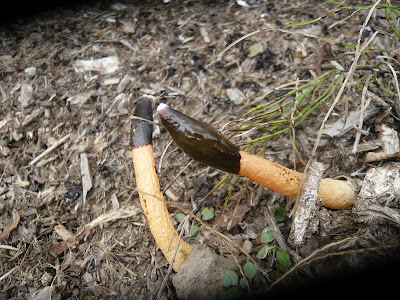 Much to my surprise, we found several Stinkhorns growing amid the mulch used to protect the roots of some of the plants in the community garden.  These things look completely obscene but they're just too weird to ignore.  And trust me: they earn the name Stinkhorn in a MAJOR way.  Kenn and I were at a naturalist rally in Tennessee a few years ago and found the spore of one of these things.  It looked like a small withered, wrinkly egg. Following the advice of a local naturalist, I brought it home in a paper bag and sat it on our kitchen counter so we could photograph it when it "hatched."  Oh, Dear Lord, did it ever hatch!  It took a few days, but then came the reckoning. I woke up one morning and was making my way downstairs when it hit me. A stench that was punch-you-in-the-face powerful. It smelled like every rotten vile thing you can think of all at once and the smell lingered and lived on in our house for several days even though we promptly evacuated it from the premises.

Let's end, not with a Stinkhorn,
but with this sweet little Woolly Bear Caterpiggle. 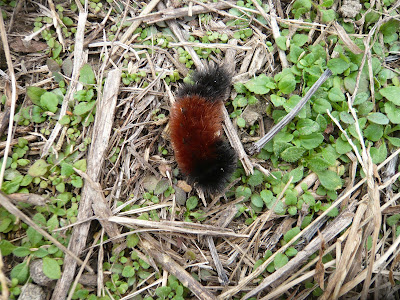 It wasn't exactly energetic, but it was alive and well and posed nicely for a photo. Woolly Bears overwinter as caterpiggles, and I hope this one survives the winter and emerges next spring as a lovely Isabella Tiger Moth.

It was a day filled with fun, exciting discoveries, and friends old and new. I'm looking forward to another week of the book tour and more of the same!
Posted by Kimberly Kaufman at 11:22 PM