Kim Writes: It's been quite a long time since Kenn and I have traveled. In fact, I don't think we've been on a plane for almost a year; much to the dismay of many birding clubs, groups and organizations that have asked Kenn to speak at events, meetings, and banquets. (I'm not afraid to admit that I love that my man is in demand!) Kenn has had to turn down so many requests because he's finishing a major overhaul of his first book, A Field Guide to Advanced Birding. The book is GREAT and I think people are going to be very excited when they get their hands on it next spring! I hope everyone understands why he had to say no to so many wonderful organizations!

So yeah, we were in full-on "Just Say No" mode, and then Steve Kress called us. Steve announced that he had taken the reins of one of National Audubon's greatest treasures, a little island off the coast of Maine called, Hog Island. I'm not going to go into all the history behind "The Hog," but trust me, this place has the kind of rich history that brings tears to your eyes. For example, when the camp first opened in 1936, the first Ornithology Instructor?... Roger Tory Peterson! Learn more about Hog Island, the camps there, and the island's extraordinary history HERE!

Budget cuts had forced Audubon to close the camp for a while; heartbreaking news for those of us who had fallen in love with the place. When Steve called to tell us that he had convinced Audubon to reopen the camp and was inviting us to come back as instructors, "Just Say No" turned into"Just Say Go!" By the way, if the name Steve Kress sounds familiar, it's because Steve is "The Puffin Dude." Learn more about how Steve snatched the Atlantic Puffin from the jaws of extinction and formed Project Puffin HERE.


PUFFINS!!
Don't you think they look like little caricatures of themselves?!
I posted a picture of Hog Island on my Facebook wall and announced that I was going to camp. Here's the picture: 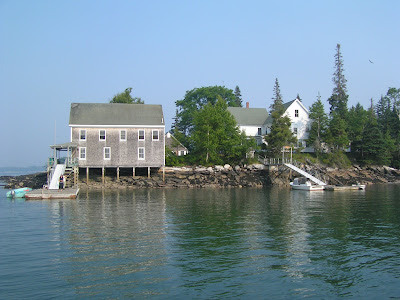 The picture does the place no justice whatsoever.
You just can't imagine how lovely it is.
After I posted the picture my friend Jason commented: Audubon Camp? Like, volleyball, swimming, first crushes, and putting on "Our Town?"

To which I responded: "Jason, It's more like, Atlantic Puffins, snuggling in a chilly, rustic cabin, being called to dinner by the same dinner bell that called Roger Tory Peterson and Alan Cruikshank to dinner, being awakened by the soft growl of the lobster boats heading out to sea in the morning mist, and Lang Elliot, Steve Kress, Scott Weidensaul, and Kenn Kaufman -- all on the same small island - freaking camp!"

By the way, "Jason" is Jason Kessler, producer of, Opposable Chums, the best video ever made about birding, If you don't have a copy of this DVD, click HERE and GET ONE. You'll love it!
I don' t have much time tonight. I've still got a ton of stuff to do and we're always scrambling to get everything done before we leave on a trip. It's always a little bit stressful and any minute now Kenn is going to start this thing he does that drives me crazy. He does this count down thing and calmy announces that we leave for the airport in XX number of hours, which sends me into a tizzy!

Also adding to my stress is the fact that this little creature recently came into our lives. Introducing, Kirby (also known as Kitty Meow Meow Head).

We've become ridiculously attached to him in a very short time and I'm a little bummed about being away so soon after we got him.

And so, I leave you with some scenes from our past trips to Hog Island and hope that someday you'll get to experience this glorious place for yourself. 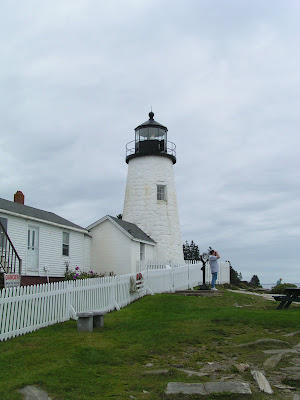 Posted by Kimberly Kaufman at 7:01 PM