Thanks For The Mammal Reads

From Oak Harbor, Ohio, Kenn writes: Way back last year -- on December 25th -- I wrote a post about a wild animal that we observed at our bird feeder. In case you don’t remember or didn’t see the post, here’s another picture of this wily creature: 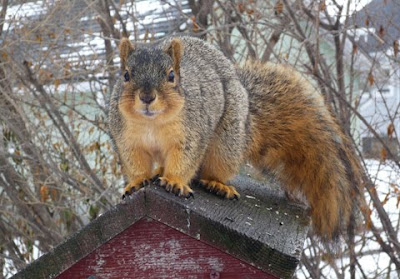 Actually, if you didn’t read it, I’d like you to scroll back to Dec. 25 and read that post and tell me: could you tell that I was trying to be humorous, or was it just too subtle?
The reason I ask is that, in that post, I didn’t mention what kind of squirrel it was. I was trying to strike a familiar chord with all those people who have had their bird feeders emptied by voracious squirrels. This has happened to a lot of people, but it isn’t always the same kind of squirrel. In the U.S. and Canada there are at least eight species of tree squirrels, plus various ground squirrels and chipmunks, that will come to bird feeders at least occasionally. If I had started to get technical about the particular type of squirrel that was chowing down at our feeder, the post would have bogged down in detail.
It was sort of like saying: "Don’t you hate it when your neighbor’s dog barks all night?" instead of saying, "Don’t you hate it when your neighbor’s three-year-old female beagle-spaniel mix with three white paws and one brown paw barks all night?" If your statement is more general, it’s easier for people to relate.
Anyway, after that blog post was published, I got three anonymous comments -- one mild, two (not published) pointedly snarky -- taking me to task for not identifying the species of squirrel. "Do you think all squirrels are the same kind?" "Are you so narrow-minded that you can’t even identify the squirrels in your own yard?"
So -- okay, the animal at our feeder was an Eastern Fox Squirrel. Our area of northwest Ohio also hosts Eastern Gray Squirrel and Red Squirrel, as well as Southern Flying Squirrel, but the Eastern Fox Squirrel is more common out in the farm country with scattered towns and scattered groves of trees.
To quote from published information: "Very common in many areas east of the Rockies, in open woods and parklike areas with large scattered trees and an open understory. It is often found in the same forests as the Eastern Gray Squirrel, but because it favors more open habitats, it is more numerous in the midwest ... Less arboreal than some of its relatives, this squirrel spends a lot of time foraging on the ground ... Like most tree squirrels, Eastern Fox Squirrels have a varied diet. Acorns and other nuts are staple items, but they also eat flowers, buds, seeds, bark, fungi, birds’ eggs, insects, and sometimes carrion. They also raid bird feeders, but because they are not as agile as Eastern Gray Squirrels, they are more easily foiled by strategic placement of feeders in places they can’t reach."
I’m happy to say that the source of that information is the Kaufman Field Guide to Mammals of North America, written by Nora Bowers, Rick Bowers, and myself, published in 2004 with a slight update in 2007. So, um, to answer the question from one person who commented on the Dec. 25 post: Yes, I do know what kind of squirrel it was. 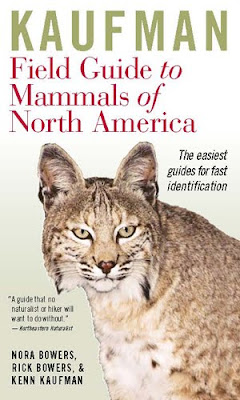 The book’s treatment of Eastern Fox Squirrel includes a full page of text, a range map, a diagram of the tracks, and six color illustrations. That’s more detail than some species receive, but every North American mammal is treated in the book. I hope I don’t sound too horribly conceited in mentioning this book, but I'm proud of the way it turned out. It’s an excellent guide -- not because of me, but because of hard work by Nora and Rick Bowers as writers and photographers, by Stacy Fobar as managing editor for the project, by Eric Powell on digital graphics, by expert consultants Christine Hass, Nancy Mann, and Ronnie Sidner, by my editor Lisa White at Houghton Mifflin Harcourt, and by more than 50 photographers who contributed to the book. If you’re interested in wildlife, I would encourage you to consider picking up a copy.
Okay, enough of this. Who cares about mammals, anyway? Let’s get back to birds!
Posted by Kenn Kaufman at 11:09 PM