A Special Gift: Wildlife at the Bird Feeder

From Oak Harbor, Ohio, Kenn writes: I don’t often blog about bird feeder happenings, but in honor of the holiday season, I wanted to let all of our friends know about a major triumph at our feeders. Kimberly and I are interested in all wildlife, of course, and sightings of wild mammals can be particularly exciting. What a treat, then, to actually attract one of these elusive wild creatures into our own backyard, where we can observe it and begin to learn about its habits.
Imagine how thrilled we were when we looked out the window on Christmas morning and saw this: 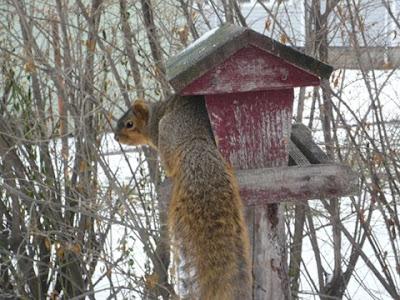 Yes, it’s a squirrel. If you have spent any time in wild habitats with tall trees, you may have seen these wary acrobats climbing about in the branches, far above the ground. Getting a good look at one, though, that’s another story.
Kimberly and I had glimpsed these wily creatures around Oak Harbor, but we had hardly dared to hope that we could actually attract them to our own yard. But here was one of these elegant wild animals right outside our window.
Of course I should have been satisfied just to watch from indoors, but I couldn’t resist trying for a closer view. When I eased out the door, the squirrel was instantly on the alert: 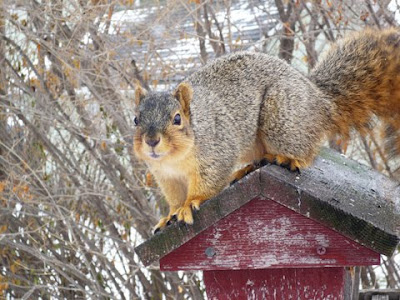 These wary creatures are endowed with keen senses, with sharp eyesight and with hearing and sense of smell far superior to man’s. I had taken the precaution of eating some salted peanuts before I walked out the door, to try to mask my human scent, but the squirrel detected me immediately anyway. 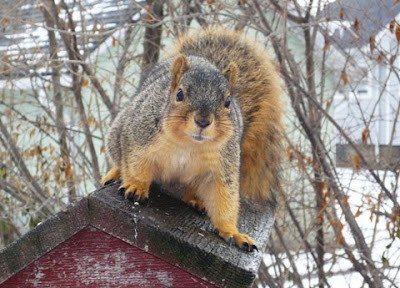 It was thrilling to be able to observe this shy treetop creature without even using a telescope, but I knew I could not push my luck too far. The squirrel undoubtedly would flee if I approached any closer than about 13 inches. 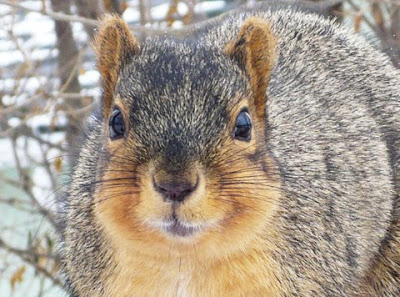 Friends of ours have put out feeders and have failed to attract squirrels, even after trying for five minutes or more. So in the spirit of the season, we should share the secret of our success in attracting this wild animal. After much experimentation, we have found that squirrels are only likely to feed on items that have some animal or vegetable components. They seldom eat pure plastic or concrete or metal, although they may chew on these materials. Even some items with an organic basis, like wood, may be only chewed up and not actually eaten by these picky and fastidious creatures. So the items placed in the feeder should have some resemblance to something edible. Price has an impact as well; somehow these amazing animals can detect the relative cost of different bird feeder items, and feast upon only those that are most expensive. Finally, squirrels seem to require a certain level of irony in their diet. A so-called squirrel "baffle," or one of those feeders jokingly labelled as "squirrel-proof," may bring them in from miles away to sample your most expensive sunflower seeds or suet mixtures.
Alas, I must have approached too closely, or perhaps the squirrel noticed that I was banging on the side of the feeder with a large stick. Fleeing on the wings of the wind, the shy creature sought refuge up in tree branches at a dizzying height, a full four feet above my head. 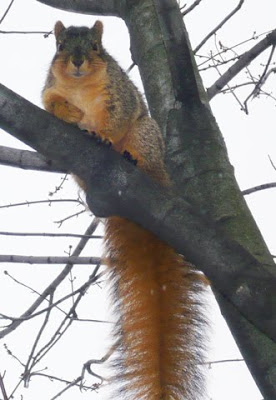 I had violated that boundary between man and wild beast. The squirrel was truly terrified. It would not come back down to finish scarfing down all the black oil sunflower seeds from the feeder until I had been back inside the house for a full fifteen seconds.
Whether or not you are blessed with a visit from a wild creature such as this, Kimberly and I both wish you all the joys of the holiday season and a healthy and prosperous new year.
Posted by Kenn Kaufman at 1:28 PM