... maybe that should be Saffron Oklahoma Bustards 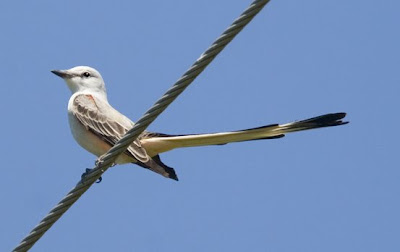 From home base in Ohio, Kenn writes: In a previous post (April 16) I mentioned that two friends and I were planning to try to break the Big Day record for Oklahoma next week. On either April 26, 27, or 28, depending on last-minute decisions about weather, we hope to find more species of birds in one day within the state boundaries than anyone has before.

As I write this, my friends Jeff Cox and Jim Arterburn are driving from Tulsa down to Lawton, in southwestern Oklahoma, for final scouting of the area. Soon I’ll be getting on a plane to go join them. I’ll be flying into Dallas - Fort Worth, not into any Oklahoma airport, and that’s an indication of how far south our route will be. The last two times that Jeff and Jim and I broke the state record, we were birding the northern tier of counties, very close to the Kansas state border. This time we’re doing a southern route, barely north of the Texas line. That option gives us a whole new set of possibilities.

When I was a rabid kid birder in Kansas, I acquired a book on Oklahoma birds by George M. Sutton, and I spent hours poring over its detailed accounts. It was amazing to read about all the birds that could be found in the southern counties of Oklahoma. McCurtain County, down in the southeastern corner, was like a chunk lifted straight out of Louisiana, with resident alligators and with southern birds like Brown-headed Nuthatch, Swainson’s Warbler, and Bachman’s Sparrow. Even White Ibis, Purple Gallinule, and Anhinga were possible. Then in the southwest part of the state, around the Wichita Mountains and farther south, there were all these birds that seemed like reminders of west Texas or New Mexico: Rufous-crowned Sparrow, Black-chinned Hummingbird, Rock Wren, Canyon Wren. Back in those days I marveled that all those birds could be in the same state, just a few counties apart. But I didn’t connect the dots and think about doing a Big Day that took in all these birds of the east and west.

In a few days, I guess we’ll find out whether or not it’s really possible. Naturally, now that we’ve committed to that series of dates, the weather forecast is calling for scattered thunderstorms across southern Oklahoma on all three days. But Jim and Jeff and I had to dodge rain showers the last two times we tried this kind of crazy stunt, in northern Oklahoma in 1996 and 2001, and we set records both times. Maybe we’ll get lucky a third time as well. But we could use positive thoughts and good wishes from anyone reading this!
Posted by Kenn Kaufman at 10:26 PM