From Huron, Ohio, Kim Writes:
You have the sense that a birding trip—any trip—is going be good when it starts out looking like this~ 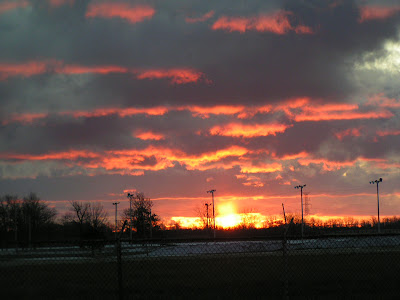 Today I did something that I’ve wanted to do for years. I spent the day freezing my bird-loving behind off birding the Eastern Lake Erie shore line with a very fine group of boys. My posse included: Kenn Kaufman, Robert Hershberger (of Time & Optics LTD), Samuel Weaver, Phil Chaon, Jeb Chaon, and Ethan Kistler.

Our first stop was the Huron Harbor. I have never seen so many Bonaparte’s Gulls in my life! Seriously. The place would have made Alfred Hitchcock run screaming. We estimated somewhere in the neighborhood of 8,000 at the end of the break wall. 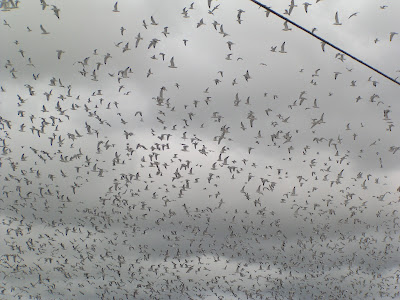 The sight and sounds of the massive flock were almost overwhelming; but at the same time, completely wonderful. “Bonee’s” are such sleek, elegant gulls. Alongside the Ring-billed Gulls in the area, they made the Ring-billeds look lumpy and dumpy. Yes, it sucked to be a Ring-billed at this spot.

But, it wasn’t just about gulls. We had repeated fly-bys from a young Pomarine Jaeger, a distant Surf Scoter hauling rectrices West, and great looks at a Long-tailed Duck as it flew in over us and landed about 300 yards away. 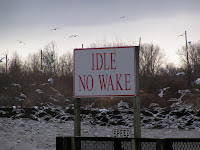 It felt so good to be out braving the elements to see birds. It made me feel kinda tough; like extreme birding. I thought this sign had a somewhat different connotation this time of year. As if to say, "Hey fool, it's cold out here." "You stand around idle for too long and you might not wake up!"
Now you have to understand that it wasn’t just that we were out in the bitter cold. ugh ugh. On top of a stiff North wind, and freezing temps, getting to the end of the break wall--where all the action was--
proved to be challenging as well. Slippery, uneven surfaces, with large gaps between some of the massive rocks revealing deep crevices just waiting to gobble up a $2000 scope if you miscalculated your step…Oh yeah, extreme birding!
We were out at the end of the break wall for a long time before finally deciding that we had to move on to the next spot. When we left, I walked back along the break wall with a little “Chick Swagger” goin on, and singing that old Bob Seagar tune in my head. Remember, “They Love to Watch Her Strut?” That’s right...Me, the lone female in this flock of boy birders, showin the boys a thing or two.

Posted by Kimberly Kaufman at 10:38 PM